The Culture of Victimization

The Culture of Victimization 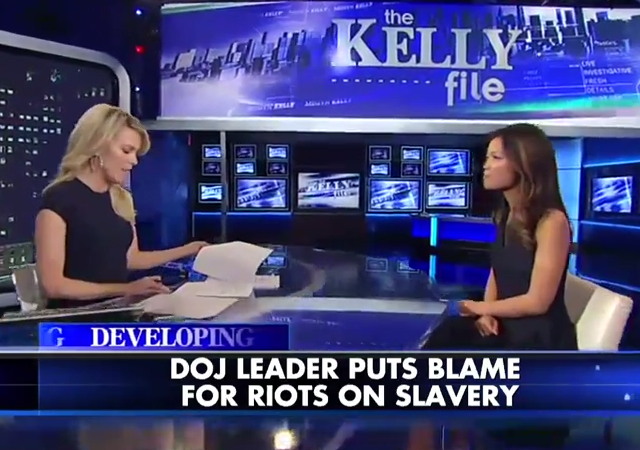 Department of Justice official Vanita Gupta has come under fire for suggesting the riots in Baltimore and Ferguson should be blamed in part on slavery and Jim Crow laws.

DOJ Official: Slavery to Blame for Riots in Ferguson and Baltimore

Vanita Gupta, head of the Department of Justice Civil Rights Division, has told a lawyers group in Colorado that slavery and Jim Crow helped fuel the Ferguson and Baltimore riots.

The last few days have seen a number of fanciful stories with the Obama administration seemingly questioning the authority of local police. I’ve long maintained that the administration is nakedly seeking to federalize policing standards — but get rid of local police? No way, that sounds like something broadcast from a shortwave station in Austin, Texas.

But then up steps Vanita Gupta to lend some credibility to the idea that some want to disband local police and replace police powers with the federal government. Speaking to a group of left-wing lawyers in Colorado, Gupta had this to say:

The conversation in these rooms, however, is not about whether to have police or not but about what kind of policing communities want and deserve.

There is no question that we need police in our communities.

The conversation? What conversation is Gupta hearing that needs to be corrected? Who brought up the idea we might not need police? Nobody sane, for sure.

Megyn Kelly recently discussed the subject with conservative author Michelle Malkin, who analyzed the issue in a political context.

Has anyone bothered informing Gupta that slavery ended over a hundred years ago, and that the party of Jim Crow and the KKK is the Democrat Party?

Redistributive change or secular opiates are addictive and potent suppressors of integrity and conscience.

WAAAAY over a hundred: 150-Years ago.

This isn’t about ‘reality’ – it’s about grabbing power through street violence.
http://en.wikipedia.org/wiki/Sturmabteilung

Also, the separation of Church (i.e. organized moral consensus) and State is a fantasy told by a desperate establishment hoping that people will ignore that legal and moral/religious laws are fungible.

There are two realities that make a difference, here.

1. White people, at great cost to themselves, put an end to slavery in this country about 150 years ago. There is not one person alive today that has an actual memory of being a slave.

It’s worth adding that n one has grandparents or even great grandparents still living who experienced or witnessed American slavery.

Abe Lincoln was a Republican. So, too, is that Birmingham, Alabama girl, Condi Rice. I’m thinking she’d be the PERFECT V.P. Candidate in 2016.

Gupta is correct – slavery is responsible for recent unrest in the black community. It is not the chattel slavery of yore, and blacks don’t pick cotton anymore, but they are still kept down on the plantation by dependency. They surrender not their labor, but their votes to their Progressive masters.

Is there anyway Baltimore can be walled off and offered foreign aid? After all the two Democrat leaders have said, “Its only property” and “What difference does it make now?”

“The conversation in these rooms, however, is not about whether to have police or not but about what kind of policing communities want and deserve.”

For decades, the Collective has HATED the police, and law and order generally.

We’ve heard your “conversation”, honey. Police are “pigs”… the “man”…who enforce the “white man’s” rule of law, which you hold to be naturally oppressive.

Funny thing, though; communities all over America support their police, and they JOIN the police and LEAD the police. And color or sex doesn’t make a whit of difference. Because American values are universal, and we like our communities to be decent, peaceful, good places to raise our children and live inoffensive lives in freedom.

“Because American values are universal, and we like our communities to be decent, peaceful, good places to raise our children and live inoffensive lives in freedom.”

I can count 8 (maybe 9) different extremely offensive microaggressions in this one sentence alone.

Good luck getting a lefty to agree that your life is inoffensive, when they’ve made an art of sticking their noses so far into your business that you can’t turn around without accidentally hitting the end of your freedom (aka the tips of their noses).

I don’t think Rags makes any bones about exhibiting just plain aggression towards Progressives. There’s nothing “micro” about his comments!

The suggestion has been made by a few Progressive mouthpieces to create “police-” or “policing-free zones” in some communities. I think they should be implemented. When they are, we can create a pool and bet on the exact time and day of the calls to return the police to these zones.

She should blame the original sinner.

John Casor. In 1654, John Casor became the first legal slave in America. Anthony Johnson, previously an African indentured slave, claimed John Casor as his slave. The Northampton County rule against Casor, and declared him propter for life by Anthony Johnson.Since Africans were not English, they were not covered by the English Common Law.

Attend any Brookings Institution lecture or panel discussion to hear just that “vision” of where the ruling class intends to take affairs.

One answer to this effort would be to create, now, Civil Defenses Battalions attached to existing state and local LE agencies. These are needed in any case, already, to defeat ever-more-rampant roving bands of poor thugs, rich anarchists and delirious caliphists.

“The suggestion has been made by a few Progressive mouthpieces to create “police-” or “policing-free zones” in some communities. I think they should be implemented. When they are, we can create a pool and bet on the exact time and day of the calls to return the police to these zones.”

As I understand it, there has been far less policing in Baltimore since the riots, and the murder rate has soared.

The thought of self-policing or self government never enters the minds of those already willfully enslaved by the federal government.

Why the EFF are these brown POS getting away with this slander???? The rest of the world is a cesspool, and only white European culture has ever done anything good for humanity.

Blacks clinging to their race and victimhood.