Will free trade get a fast track? 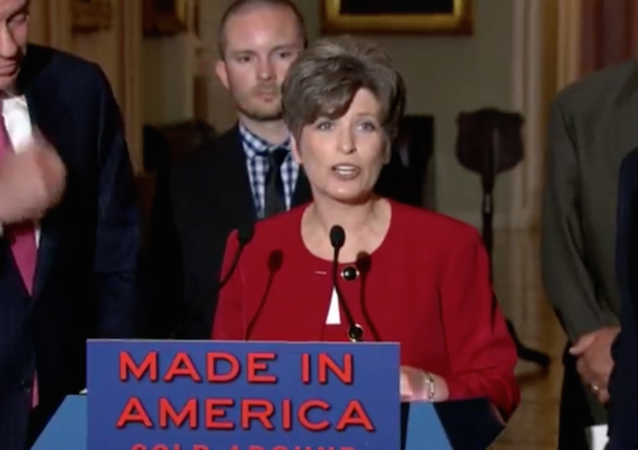 Leader McConnell and other proponents of the TPA are giving the legislation priority in spite of a growing debate over both transportation funding, and reauthorization of provisions of the Patriot Act that allow the NSA to collect phone records. Democrats have attempted to put the debate over the TPA until June (thus easing their own time crunch on desired pro-union amendments,) but Senate leadership is bucking all efforts to sideline the bill until after the Memorial Day recess.

You can watch the full press conference here (starting at 5:52):

As I previously wrote, it’s not just conservatives who are divided over the idea of a “fast track” option. Democrats too have pushed back against the TPA as it stands; last week Democrats filibustered a clean passage, instead advocating for amendments they claim will protect the rights of American workers and crack down on the effects of currency manipulation overseas. Republicans have also joined in in the effort to crack down on currency manipulation; however, backers of a cleaner TPA fear that these amendments could act as a “poison pill.”

Ending debate on the trade bill would block dozens of amendments. Nearly 90 of them had been filed as of Monday afternoon, with proposals coming from both sides of the aisle.

One amendment would extend the life of the Export-Import Bank. If adopted, that provision could become a poison pill for the fast-track legislation in the House.

Another amendment would eliminate the Trade Adjustment Assistance (TAA) program, which is a priority for Democrats.

Yet it’s a currency manipulation amendment from Sen. Rob Portman (R-Ohio) that is taking the lion’s share of the attention.

The Obama administration is firmly against such a provision, arguing it would doom the 12-nation Trans-Pacific Partnership agreement he is trying to complete.

Top Republicans, including Sen. Orrin Hatch (Utah) and House Ways and Means Committee Chairman Paul Ryan (Wis.) have sided with the administration, arguing that adding the currency language would damage economic growth over the long term.

To their credit, backers of the TPA are focusing almost entirely on the benefits of a (potentially) more streamlined trade agreement process. In her comments during the presser, Joni Ernst (R-IA) focused entirely on how the TPA would benefit jobs in Iowa (20% of jobs in Iowa are affected by trade.) When asked about their concerns about currency manipulation, and the possibility of an amendment being added to address those concerns, both the senators and their private sector counterparts immediately pivoted back to jobs. Concerns about partisan stonewalling? No way—let me tell you about how this will help job creation.

Big focus on job creation, less focus on partisanship. It’s a powerful message, but whether or not its effective in convincing detractors that the TPA remains to be seen.

We’ll keep you updated on the vote. Leader McConnell has said that the Senate will remain in session until differences are resolved, so we could be in for a long haul.

No need to analyze further:

1) Obama wants it.
2) It contains hidden provisions that no one can explain that surely violate the law and the Constitution.
3) It thus can be expected to have a bad effect on the country.
4) Therefore, Mitch McConnell and the DIABLO’s will make sure that it happens, AND that the Republicans take the blame.

It is how the country is run.

There is NOTHING “secret” in the fast track. It’s the way we’ve dealt with trade deals for a generation because if we don’t, the special interests will always sink them.

The “secrets” are in the ONGOING negotiations for the actual deal, which isn’t completed yet. There are a dozen countries involved. Of course negotiations are secret. Only idiots think you can negotiate in public.

Once a deal is signed and submitted for ratification, all the “secrets” will be known. See how that works? If it sucks, vote it down.

Fast Track only means an up-or-down vote without amendments on the final deal. It’s the way we’ve been doing it for some time, it’s the only way a trade deal can EVER be made, so stop spreading disinformation on it.

I all in for free trade.

I am NOT in for secret bills carefully hidden from the people.

Of course, without the text of the bill and the proposed amendments, it’s hard to tell who is telling what part of the truth. Further, I wonder how, or if, they know.

This is not the only secret bill. Without notice Senator Lamar Alexander replaced the rewrite of NCLB, the K-12 federal education legislation, from the form that unfortunately passed unanimously out of committee with a new, 200 page longer, version. Talk about Bait and Switch.

We have been talking about it on my blog today in the comments with links along with how tightly this new language dovetails with the UNESCO/Brookings Center for Universal Education global education agenda.

Banana Republic time as politicians at every level lie to the public about what is really going on.

So, as an attorney, you do all the negotiating for your clients publicly?

The American people are in theory the client. I don’t expect my lawyer to hand me an agreement obligating me while not even letting me read it.

That MAY be the stupidest thing you’ve posted.

Why of course we should trust Obama and the GOPe. Everything they’ve done has worked out great, right?

As if we have any say anymore. Get ready to get screwed again.

What’s the rush? Another bill we need to pass before we can find out what’s in it?

I haven’t seen it, I doubt Joni Ernst has read it, so it it should voted down just on process reasons alone. As far as I know only two senators have gone to the grotto to read it.

Why isn’t the consent of the governed being sought?

Because the “consent of the governed” is sought when the final deal is submitted for ratification. All the “secrets” come out then. The information in “the grotto” is sensitive material of the ongoing negotiations, NOT the fast track authority.

They are two separate things.

This is neither new, nor rocket science.

Sure, Obamacare was negotiated behind closed doors with Pharma, big Insurance groups and that’s just worked out swell, right?

Fine. Give us links to the current draft, and the proposed amendments.

Republicans take the Senate by promising to stop Obama’s power grabbing, then McConnell and the RINO chorus push a secret
legislation to give him even more power to abuse. Worst Republican leadership in 50 years!

We aren’t the only ones that dislike this procedure, and no, this is not the same procedure that has been used, before. Before, there were people who would be cleared to read and keep up with the negotiations, which were kept confidential. Now, people who are cleared are not being kept informed.

This is very similar to the way the ACA handled, but not, I take it, NAFTA.

Please bear in mind that I suspect I would disagree strongly with both Elizabeth Warren and Michael Wessel about what additions ought to be made to the agreement. In particular, I suspect I would not want provisions about unions in other countries added.

We should also keep in mind that “final up/down approval” is meaningless if a five hundred page bill is finally made public and voted on in a few hours. All kinds of odious clauses can be hidden if this is the process.

I urge all my fellow Republicans to contact your Senators and help Kill the Bill!