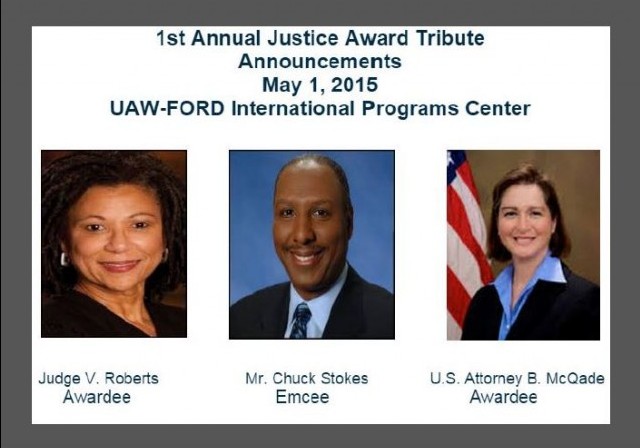 Rasmea Odeh was convicted in Israel in 1970 of the 1969 supermarket bombing that killed two students, Edward Joffe and Leon Kanner.

The evidence of Rasmea’s guilt was overwhelming, as we documented.  Rasmea was released in a prisoner exchange in 1979, and eventually made her way to the U.S. in the mid-1990s.

Rasmea flat-out lied on her immigration and naturalization papers, when she denied that she ever had been convicted or incarcerated.

Rasmea was prosecuted in federal Court in Detroit for immigration fraud by prosecutors in the office of U.S. Attorney Barbara McQuade. Rasmea’s excuses for lying were lacking any credibility, and the jury took only 2 hours to convict her. Rasmea was sentenced to 18 months in prison and ordered deported after that.

As we have reported before, Rasmea has been turned into a hero of the anti-Israel activist community, based in large part on her claim that the Israeli conviction was based on a confession extracted after 25 days of sexual torture.

In fact, the documentary evidence shows Rasmea confessed just one day after arrest, was implicated by others as the mastermind, and the conviction was supported by other evidence, such as bomb-making material found in her bedroom.

Nonetheless, the pro-Rasmea propaganda machine continues to churn out the claim that Rasmea is a victim. While out on bond pending appeal, Rasmea is regularly feted as a heroine alongside such notables as Angela Davis (who is a big Rasmea supporter).

It is not surprising, therefore, that the mythology of Rasmea the Victim is being used by activist groups to challenge a Justice Award to U.S. Attorney McQuade by the Michigan-based Arab-American Civil Rights League (ACRL) among other groups. (See Featured Image.) 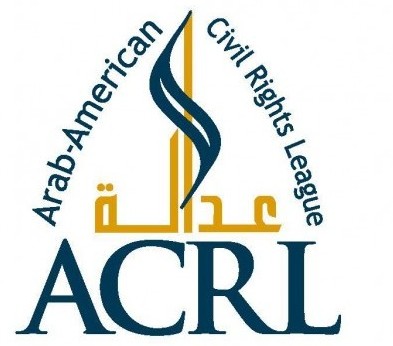 The campaign against McQuade is being spearheaded by the Rasmea Defense Fund. 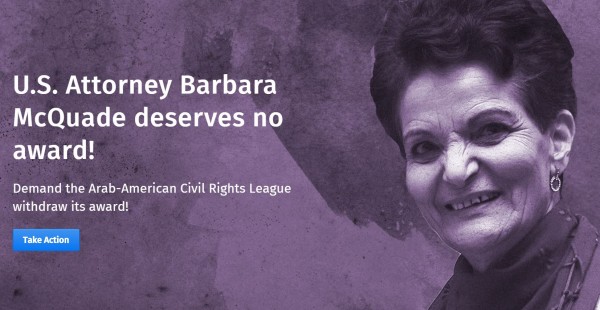 The Rasmea Defense Committee is angered to have learned today that the Michigan-based Arab-American Civil Rights League (ACRL) will be presenting U.S. Attorney Barbara McQuade with an award at its upcoming “Justice Award Tribute” event Friday, May 1st, in Detroit, MI. This award comes on the heels of McQuade’s supervision of the unjust arrest, trial, and conviction of our beloved community icon Rasmea Odeh.

McQuade directed the prosecution led by Assistant U.S. Attorney Jonathan Tukel, in which he repeatedly referred to Rasmea as a “terrorist” and consistently questioned the validity of her torture at the hands of the Israeli military. McQuade also signed off on a pre-trial motion to Judge Gershwin Drain, referring to Rasmea’s supporters who had demonstrated in front of the federal courthouse as “mobs and hoards [sic].” A prosecutor who chooses to use this language to describe our community should not be awarded by an Arab organization that alleges to protect our civil rights.

The protest against the award has attracted all the usual suspects. Like Joe Catron, the International Solidarity Movement activist who organized human shield operations in Gaza in 2014: 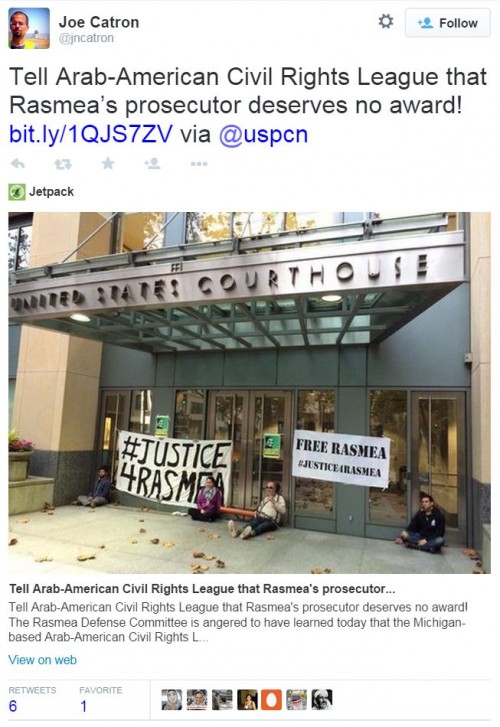 And Josh Ruebner from the Campaign to End the Occupation, who likes to throw around the “Israel Firster” slur: 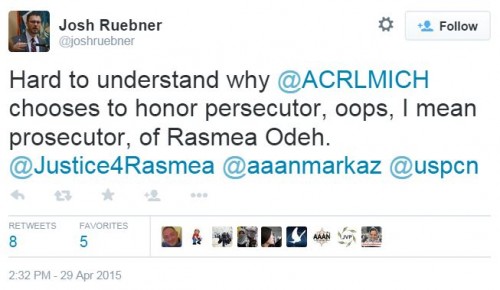 The organizer of protests that led the Judge in the federal case to issue orders protecting jurors, has made a veiled threat of action against ACRL if it doesn’t revoke the award to McQuade:

“We at the Rasmea Defense Committee were stunned by this announcement when we saw it two days ago. We don’t understand how an Arab civil rights organization could possibly award the initiator of such a clear campaign of repression and harassment as Rasmea’s prosecution. We want to give ACRL every opportunity to rescind the offer, and if it doesn’t, we are thinking about next steps,” Executive Director of the Arab American Action Network, Hatem Abudayyeh, told Palestine in America.

Will the Award be revoked?

My email to ACRL founder and Chairman Nabih Ayad and a phone message at ACRL’s offices seeking further information have not been returned as of this writing.

Like those who want to free the cop-killer “Mumia,” these evil slime just expose themselves for what they are.