At age 89, Roslyn Joffe left a message about the death of her son, Edward: “I could never get over that and it overshadowed all my joy” 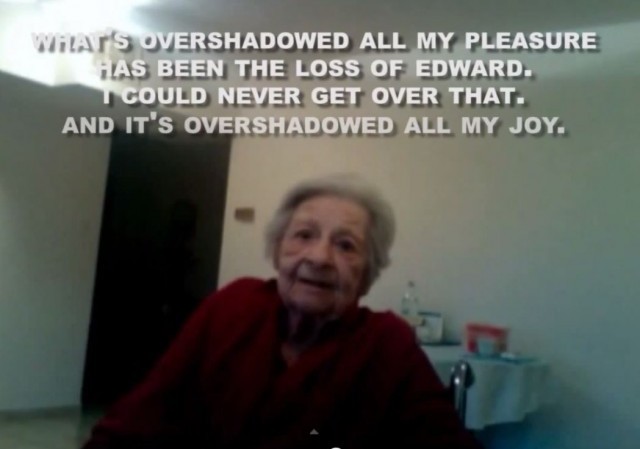 Rasmea Odeh was convicted in Israel of the 1969 bombing of the Super Sol supermarket in Jerusalem, in which Hebrew University students Edward Joffe and Leon Kanner were killed, in addition to the attempted bombing of the British Consulate.

Rasmea served 10 years of a life sentence before being released in a prisoner exchange in 1979 for an Israeli soldier captured in Lebanon. Rasmea later immigrated to the United States, where she has made Chicago her home since the mid-1990s.

In November 2014, Rasmea was convicted in federal court in Detroit of falsely procuring naturalization, by concealing her Israeli convictions and incarceration. Sentencing is March 12, 2015.

The evidence supporting both the Israeli and Detroit convictions is overwhelming and from multiple sources, as I demonstrated in Rasmea Odeh rightly convicted of Israeli supermarket bombing and U.S. immigration fraud.

Rasmea has become a hero to the anti-Israel activist community in Chicago and nationally, with fundraisers and national events in her honor, as well as a letter writing campaign to the Court.

I recently obtained a video that Roslyn Joffe, Edward’s mother, left shortly before her death at age 89 in 2009. We used the untouched video as part of telling about the real victims, Edward and Leon (emphasis added):

This is a farewell message to all of you. I love you and I’ll miss you all. Unfortunately I’ve got to go.

Anyway, I’ve outlived lots of people and I’ve been blessed with wonderful children, grandchildren and fantastic great-grandchildren. Not everyone has that blessing in life. So, it’s my final farewell, with love and kisses.

Otherwise, I wish my children, my grandchildren and my great-grandchildren lots of health, happiness, success in life and to achieve all their ambitions.

Goodbye and I love you all.”

A wonderful woman who left a world gone mad. May she rest in peace with justice for her Edward upheld.

My grandmother never got over the death of her first child, Benjamin T., who died after a freak accident while training to be a Green Beret, in the mid-sixties. It’s a huge burden that many carry for the remainder of their lives.

THANK you Professor, may the Creator of all that is – both in the heavenly realms and here on earth, bless you.

I’ve been told He stands outside of time. Certainly it was by His grace that this old woman saw her great grandchildren; a comfort for her great loss.

This woman’s testimony has crept into my conscious. Am I alone, but doesn’t it seem that the more the Muslim hordes strike and beat on Israel, (and her children) that the God their forefathers served gives greater blessings.

Everyone remembers Joseph’s words to his brothers, when their father died. This almost looks like those same words, worked out in our midst. The enemy can strike and cut our flesh – look at Job. Yet, our Creator’s comfort far exceeds all pain – just look at Jemima and her sisters. Amazing to pity he extends to His servants, His creation.

Tears in my eyes, Professor. It was as if she were my very own grandmother. I can only imagine her family’s reaction.

(My real grandmother passed on a couple of years ago, at age 99.75. I just wish someone had the foresight to record a farewell message from her while there was still a chance…)

You should combine this article with the “It’s just a photograph” article.

And this amidst the news that in between golfing while on vacation in Martha’s Vineyard, when our hostage was beheaded and President Prissyboy McStompypants had to take five minutes out of his holiday to give a half-hearted statement, he then hosted a dinner for Bill Ayers and Bernadette Doehrn, two unrepentant terrorists with blood on their hands who were arrested just before carrying out a bombing of a US Army dance.

The greatest curse I can wish upon Odeh, Ayers, Doehrn, and their like and their enablers like Obama, is: May you get what you deserve.

Well, if you ask Shirley MacLaine, her son probably deserved it:

Some ‘people’ really are just subhuman animals, aren’t they? Really a lack of words for people who could be supporters of Odeh. May The fruits of their karma strike them on an accelerated payment plan …