As the world goes to Hell… 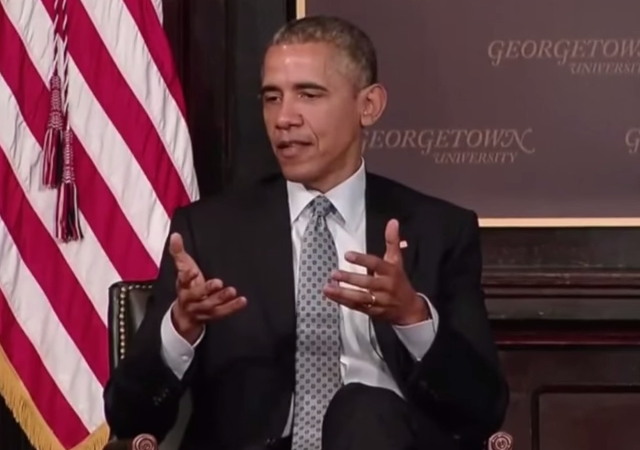 America’s foreign policy in the Middle East is falling apart and health insurance premiums are skyrocketing under Obamacare, but the liberal media feels your pain, America.

As usual, it’s all about Obama.

President Obama’s second-term agenda, it seems, is in the hands of the courts.

Same-sex marriage. Obamacare. Climate change. And now immigration. And in many cases, there is significant doubt about whether his signature initiatives will stand legal scrutiny.

The latest blow to Obama’s second-term plans came Tuesday when a federal appeals court in New Orleans denied the administration’s request to move forward with implementing his expanded executive action on immigration to defer deportation for millions of undocumented immigrants.

That’s funny. He didn’t run on gay marriage. In fact, Obama said in a 2008 interview with pastor Rick Warren that he believed marriage was between a man and a woman.

He also said that we could keep our healthcare plans and doctors if we liked them.

Maybe the American people now know he was lying, and maybe his legacy doesn’t matter.

Maybe this is all about the presidential library.

Deep into the seventh year of his tenure, Barack Obama is thinking about his post-presidential legacy. We know this because he’s telling us so.

In an interview this week with The Atlantic about the potential deal with Iran regarding its nuclear program, the president sought to use the fact of his relative youth and his consciousness about how history might judge him to his advantage: “Look, 20 years from now, I’m still going to be around, God willing. If Iran has a nuclear weapon, it’s my name on this. I think it’s fair to say that in addition to our profound national-security interests, I have a personal interest in locking this down.”

In one sense, this is what we want presidents to worry about. We want them to be restrained by the cautionary examples provided by history and by the fact that history will judge them.

Forgive me if I’m more concerned about America’s legacy than Obama’s.

They should be. There is no putting lipstick on this pig!

The Dems have already thrown him under the “bus.”

With any luck he’ll actually step down and HAVE a legacy. Current course and speed Dear Leader may decide to be emperor forever.

Don’t worry – Hillary will fix everything.

Killary will be the shoo in she was in 08.

Barack Hussein al-Chicagi’s legacy is already cast in reinforced concrete – he leaves a country poorer, racially divided, demoralized and under attack from a progressive evil creeping across the landscape. The witless minions of the self-serving media can worry all they want, but they stand with the elite to tell the unwashed masses what is important.

But wait, is that Hillary Clinton they see on the horizon? Anybody think they won’t try again?

The sooner Obama steps down, the sooner he will be able to devote himself to his legacy. After 6 years, even Biden is starting to look good.

I trust that God will forgive me for that lie.

Obamacare decision up next and France saying No Way Jose to Iran pretty much stomps his legacy. Next they will say he didn’t really want a legacy anyway.

As far as I am concerned, Obozo’s legacy is why is he not wearing an orange jumpsuit and shacked up with Bubba.

That’s what happens to your agenda when you try to bypass the Constitutional separation of powers.

He had so many things he could have done, and talked of doing. So it wasn’t as if he didn’t have a thought in his head. He knew what he could do, but he never really had any intention of doing things he spoke of…with a few fell exceptions.

His legacy is one of wanton destruction on a global scale, along with the unbroken string of lies, and the worst reversal of race relations in American history. That of course is a very broad generalization. A particularization would require a book-long exposition.

The question now is simply can we recover?

It is so, so sad when a country fails its president like this. For shame, America.

Sounds like posing as a good Christian, in front of all the low-information-voters who actually ARE Christians.

They’re just now figuring this out?
Good grief, everything O toucheds has gone to He!!.
He is an epic failure. That will be his legacy.

Obama’s and the present generation of liberal media’s legacies will be the yardsticks by which future presidential and liberal media failures are measured.

Yes, the liberal media is worried about their own legacy going forward.

The liberal media dropped all pretense of objectivity in support of Obama, just knowing he was going to change and fix everything. Their transgressions would be forgotten, their means justified by ends. Well, Obama instead changed and broke everything and now they realize they’ve hitched their wagon to the wrong horse. But horses are common.

Well, yeah, deductively from all the horseshit…

I didn’t see anyone in the state controlled media sticking up for the Reagan or George W Bush legacies. In fact, they did their best to shred it then and still are doing it now.