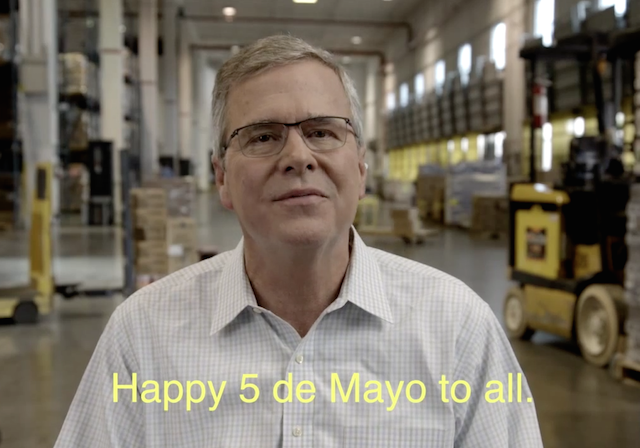 “Cinco de Mayo,” a holiday currently being celebrated on patios all across North America, marks the date the Mexican military defeated the French in the 1862 Battle of Puebla. For American politicians, the day presents an opportunity to test out budding Latino outreach programs.

Well, at least one politician. Jeb Bush is taking advantage of the day to flex his impressive Spanish language muscles and close ties to the Latino community via a new video pushed out on Facebook and YouTube.

The video, pushed out by Bush’s Right to Rise PAC, features some the same stripped-down, message-centric style that we’ve seen politicians like Marco Rubio use in the past.

“Here in the U.S., Cinco de Mayo has become a day where we celebrate our ties with Mexico and the great contributions of the Mexican-American community in the U.S…. In my case, this relationship is very profound. My wife Columba was born in Mexico, my family has always had strong ties with Mexico and I have great respect and affection for our neighboring country.”

I think this is great for a lot of the same reasons I thought Marco Rubio’s “Google Search” video was great. It’s all message, and it shows off a candidate that has a jump start on communicating with new communities that Republicans have never touched.

I took an informal poll of a few of my Latino friends (who would rather not be named or screenshotted), and they all loved this video. They didn’t see this as a pander, or an “old white guy” one-off stunt; there were excited that Bush made this video because they see it as an effort to recognize and respect a prominent American subculture.

I can feel pushback against this video coming—the why do they need to speak Spanish??? argument has already surfaced several times this cycle, much to the frustration of strategists who understand the importance of expanding messaging tactics to include new groups of voters.

Some conservatives are skeptical of Bush’s position on immigration, and that’s allowed. Understandable, even; but this message has nothing to do with immigration, and everything to do with building relationships. People come to this country every day with the goal of achieving the “American dream”; a great, great many of them don’t skip steps, and instead become citizens with jobs and cars and happy families.

This message is not for you. This message is for those people—whether or not they’re learning and still struggling with English, or just looking for a candidate who recognizes and respects the fact that America is a big, beautiful, messy melting pot.

Questions aimed at Bush’s philosophy on immigration are fair game. (Maybe the fairest game this cycle, considering the crisis on the border.) But automatically rejecting efforts to reach out to the Latino voters in a manner that they may understand better right now isn’t just foolish—it endangers the chances of every Republican candidate who chooses to make a run for the White House.

Give multilingual messaging a chance—you may be surprised at just how effective it is at drawing new, diverse, conservative voters to the polling places come election day.

Ahhhh … this is the day high school students in CA aren’t allowed to display the US flag … all with the backing of the court.

The problem with the Spanish language messaging becoming common is that we have plenty of examples of politicians of BOTH supposed parties saying one thing in their English statements, and the exact opposite in Spanish. If a candidate is promising citizenship and welfare [and sometimes reparations for the Treaty of Guadalupe Hidalgo and the establishment of a Nation of Atzlan in the Southwest], even in Spanish, all that outreach is not helping the country and supporting them is counterproductive.

I think that’s a problem too. What if a conservative group or media org made it part of their regularly scheduled programming to translate multilingual ad buys, push cards, and speeches? Do you think that would calm concerns about “dual messaging”?

If a conservative group tried it, it would mean an instant declaration of open war by both putative parties; tax audits, and all sorts of unethical actions. Which may not be a bad thing in and of itself as it would bring a much needed clarity to the situation. The same would apply to any media organization, with the additional caveat that off the top of my head the only media organization I would trust with that would be Breitbart. And their plate is rather full right now.

Hey, I can celebrate with a people throwing off the foreign yolk of a European oppressor, and France WAS a pretty bad oppressor in Mexico.

But, really, this holiday is more about Cinco de CERVEZA…or some multiple thereof.

Which, if pushed, I have to allow I’m OK with, too… Just stay OFF the roads.

I’m sorry, but whoever put a thumbs-down on Raggie here doesn’t realize he has a point.

I’m Puerto Rican, not Mexican, and I naturally have no compelling reason to celebrate Cinco de mayo. But years ago, for a Cinco de mayo activity I had to to participate in, I researched the history of the actual holiday. It was from that research that I concluded there was a real discrepancy between the way it is commemorated in Mexico and celebrated here. And then I had to tell the audience what I found out.

Do you know most of Mexico doesn’t celebrate it the way we think they do? In the state of Puebla, where the victory against the French Empire took place, it is properly commemorated at the city square. A few speeches given, a reading of what took place, a reenactment of the event or two, then sing the National Anthem. Then, people pick up their things and go home. That’s it. In most of Mexico, all government offices are open. No closing early for the “big fiesta.” No mention of beer, tequila, or margaritas. None. The real fiesta happens on September 16 – the REAL Mexican Independence Day, the “Grito de Dolores.”

It was the Chicanos here who began it in order to celebrate Mexican culture in their enclaves. But it wasn’t until the 80’s when beer companies (Oh, yes! Beer!) found a handy excuse to prop up a commemorative holiday into the party, dance and alcohol bacchanalia you see today. For money. For the dolares coming from the pockets of many “gringos” who don’t know better.

We in Puerto Rico have something similar. We call it the “Grito de Lares”, which commemorates the (failed – started with a bang, ended with a whimper and a few exiles) insurrection against Spanish rule in the island. Do we go to the beer on that day? Nope. But state government is closed, including schools. Very similar to Cinco de mayo in Puebla.

That is sad, frankly. Cinco de mayo is meant as a remembrance of the moment the people of Mexico, once again, stood up against a foreign power and found the courage to to tell the French Empire to go to hell. Just like it was done at the Battle of Forth McHenry in the War of 1812. But do we go on a drinking binge on September 13, the day of the Battle of Fort McHenry, or the next day, September 14, when Francis Scott Key wrote The Star-Spangled Banner? No, we don’t.

A little respect is due here, not another Dos Equis.

Thanks, duchess, for the kind word AND the excellent cultural lesson.

A candidate for the US Presidency should be “reaching out” to the American community.

No lesser community will do.

Including the segments of American society whose grasp on English, while growing, is tenuous at best.

I’m not talking about Obama’s five or six million “DREAMers”. I’m talking about the ~60 million Hispanic-Americans. The ones who are here legally, work and vote legally, and are learning English, but perhaps Spanish is still their strongest language.

(According to the US Census, 17% of the population identify as Hispanic or Latino, and more than 20% of the population over age 5 speak a language other than English at home. It’s safe to assume there’s more-than-significant crossover there.)

That’s a massive voting block that Republicans historically lose, by literally failing to speak their language.

No candidate for President should make any statement pertaining to their campaign in a foreign language. The American people have a right to know what their politicians are saying and promising, in English. We have zero obligation or interest in learning a foreign language in order to keep politicians honest, and to know when they break their word.

Bush keeps showing he’s a Mexican who should be running for president of Mexico.

No sale. Open borders and legalizing those that broke in are what Bush stands for.

Money is translated into different currencies every second and usually for a profit via FOREX.

I see no reason not to speak Spanish to Hispanics and proper English when recalling our great American history, forgoing, of course, the myopic history writers Howard Zinn, Noam Chomsky and Barack “Dreams From Father-Nightmares For America” Obama.

Cinco de Mayo: the day Americans drink margaritas and celebrate…Mexico spanking France. Americans have a long and storied tradition of stealing other nation’s holidays and turning them into drinking parties (just ask the Irish). However, I feel wine is left out completely. I propose stealing Bastille Day so we can celebrate the French spanking themselves (how French of them)!