An Israeli civil servant committed suicide on Saturday after a Facebook post accusing him of racism went viral.

Ariel Ronis, 47, managed the Population, Immigration and Border Crossing Authority (PIBA) offices in Tel Aviv. Last week, a black Israeli woman posted a note on Facebook about her experiences in the office, accusing various staff—including Ronis—of treating her unfairly because of the color of her skin. She says that she was denied services by a clerk, and then told by Ronis to “get out of his face” when she complained about it. She claims the incident made her cry, and caused her a considerable amount of distress.

Her post caught the attention of the online community and the media, and went viral. Ronis was officially smeared, and judging by a note he posted to his own Facebook page, the incident pushed him over the edge. 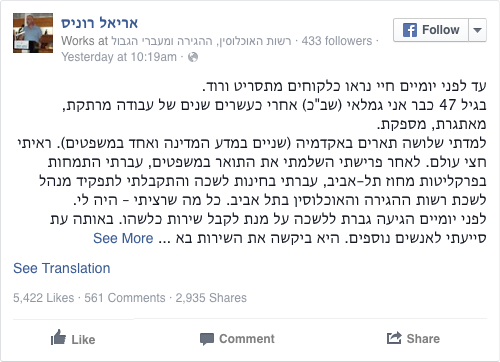 “Two days ago a woman came to the office to get service,” he recounted. “At the time I was assisting other people. She demanded the service immediately and instantly began shouting that not receiving it was racism.”

He had always espoused treating all people equally, regardless of religion or origin, he explained, even publishing a book on the subject and forming an organization dedicated to “equality between all citizens, especially minorities, and their integration into a homogenous Israeli society.

“And here this woman was accusing me of racism. I told her to stop right there. I would not have her take that route. Not in my office. There is a queue for mothers with small children and she must stand in that queue like all the other mothers. Not everything you want but don’t get is racism,” he said.

“From that moment on began a process that should be studied in every communications school,” Ronis wrote. “It was not long before I got a phone call from the public complaints division. After a few hours a (Facebook) post appeared as well as an article on (Israeli Facebook group) Mamazone, an interview (on Channel 10) and a whole media cricus. Not two days later the post had over 6,000 shares, each of them a sharpened arrow in my flesh. Me? A racist?” he wrote.

“All of my work over the course of my entire life was swept away instantly, ended momentarily by someone asked to stand in line like everyone else,” he said. “The sharers continued… to fire their arrows at me, not stopping for a moment to question (themselves).

“I hardly blame them. I too would have been appalled at such a post and perhaps would have clicked my tongue and shared (it) self-righteously, without considering the consequences,” he added.

Ronis said he could not stand the fact that his good name had been sullied, and was now “synonymous with the most terrible designation imaginable in my case — racism.”

He concluded that he was “not angry” at his accuser but said that while she may have gotten over her perceived ordeal, “I am not able to. Goodbye!”

After the news of Ronis’ suicide broke, the woman responsible for the original Facebook post (who remains unnamed as of now) said she was “heartbroken,” and that she would “do anything to take [her] action back.”

Unfortunately, the damage has been done.

I’m not going to sit here and claim that this woman’s post was the reason that Ronis took his own life, or that she is 100% at fault for his distress. That being said, this event is just one more example of how social media can be used to ruin lives in the name of perceived injustice.

We may never know exactly what happened in the PIBA offices—and that’s the problem in general with glomming on to rants posted to social media. We as a society have become content to ruin lives; we see injustice, and instead of asking questions and looking for answers, we find false solutions in the catharsis that comes from lashing out a complete strangers.

Justine Sacco lost her job and livelihood after a Buzzfeed reporter deemed a tweet of her’s “the worst tweet of all time.” Former Hill comms staffer Elizabeth Lauten quite literally had to go into hiding after her criticisms of the First Daughters’ attire went viral. The online community ate it up because, hey, it’s not me on the receiving end!

What is wrong with us?

This is a tragedy, and I’m sure we’ll see more think pieces written about the damaging effects of social media shaming—not that that will stop the mob from brandishing their pitchforks the next time some shame peddler shows up with a tale of woe.

I am so sorry for this. How horrible.

Maybe the POS-who-can’t-wait-her-turn should check her black privilege.

What is wrong with us?

Nothing. Speak for yourself, please.

There’s plenty of those Moronites that go treating people like crap, demanding undeserved privileges and special treatment, then playing the race card when people don’t bend to their demands.

Who’s fault is it, that there’s so many of those?

Well, a lot of the fault lies with white people who think a charge of “racism” is the most “terrible designation imaginable.” It’s possible it used to be — although I won’t even concede that — but now it’s ridiculous to be upset by that charge, as easily as it thrown around.

Try telling an HR person (usually herself minority) that it’s nothing. Most employers are so scared out of their minds about a “Justice” Department complaint that they will fire ANYone even so much as accused of “racism”, “sexism”, or some other perceived wronging of a protected species.

I would recommend a way that she could make up for her actions, but I don’t want to leave her children orphans.

There’s been too much death already over this incident. Please, no more.

The woman should do penance. There are actions she could take that would allow her to work through the thoughtlessness and rude behavior she exhibited that day. Her penance should be done quietly, out of the public eye, and should be substantial.

I believe the woman when she says she’s sorry. She should now be penitent.

She posted “”I’ve been on the receiving end of discrimination many times in Israel, and it pains me immensely that the one time I chose to speak about it a man died. I would do anything to take my action back and just be silent about the incident.”

She is still the victim. Notice the constant use of I. What a toxic and narcissistic woman.

She must have had a lot if experience with the kibbutzim crowd.

Some may temper their remarks and accusations, but it is near certain that others may revel in their power to destroy someones life.

This woman stinks. To kill yourself over this BS is extreme overreaction. This man had to be unstable.

I don’t do Facebook or Twitter. I don’t understand the appeal, or the hold they have over some people, and I never have. Maybe that’s why I don’t understand why people (usually, unstable teenage girls, but now an adult government worker, a grown man), kill themselves over mean Facebook posts.

Most Twitter-storms or Facebook outrage-fests I’ve seen from the sidelines, burn themselves out in a matter of days. A month later, you ask someone, “remember that time, when everyone on Facebook was all angry about that racist?” And they’ll be like, “Which one was that, there’s a new one every week.”

You ask “what is wrong with us?”…….. The answer might be that “we” are taking social media waaaaay too serious. Facebook and Twitter rants wouldn’t have that much power if “we” didn’t GIVE them that much power.

You say you don’t do Facebook or Twitter. Good; that means you have enough in your life already. Seriously, some people have to use these technologies in order to perform their duties. That said, I agree that this guy saw himself as way too fragile.

Once I was told by a boss to perform a task that was simply theft. I stewed about it for about 20 minutes and then walked back into his office and told him I wasn’t going to do it and that I quit. I packed my tools in my truck and drove home to my wife and two kids that I now had no way to support. My wife supported my decision and we struggled for awhile. But I never regretted what I did and I never concealed the truth from future employment applications.

No one ever had a negative view about it even after they called that bad boss and got a completely different story. You never lose until you surrender. This guy surrendered to the enemy and the cost was his life. A person simply must have internal value structure in order to live.