When it comes to federal regulations, I find the “it shouldn’t be this complicated!” argument to be flawed. Of course it’s going to be complicated—the federal government regulates activity concerning 50 states, a military, a rambunctious federal District, and foreign relations. They’ve got a lot going on; hence, the rule making can’t really be confined to a few bullet points.

That being said, at some point, you have to turn off the spigot and get serious about just how many rules and regulations the federal government should be allowed to throw at the American people.

Earlier this year the Mercatus Center, a free-market economic think tank at George Mason University, created an infographic to illustrate just how ridiculous the Code of Federal Regulations (CFR) has become—and why they had to create a computer program just to read all of it. Take a look: 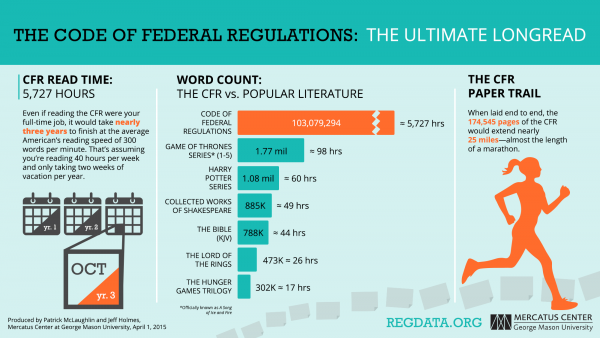 5000 hours of reading; 25 miles of paper; it’s longer than Game of Thrones, which should probably be against the law. That’s why Mercatus invented “RegData,” a computer program that “reads” and parses out the literal library of federal regulations. Mercatus explains how this program has helped their scholars wrap their brains around a body of law that is, for all practical purposes, impossible to actually read and understand:

RegData’s programs, on the other hand, have not only read the 2012 CFR, but also the entire CFR published in each year from 1997 through 2012. This allows us to see how regulation has changed over time—which agencies have grown or shrunk, which industries are targeted more or less, and how major acts of Congress affect the rate of producing regulations. Before RegData’s creation, any attempts to answer these questions were simply . . . fantasy.

This is huge. Reading and understanding is the first step to educating and advocating for change—but what rules can we do without?

Like it or not, the federal government exists for a reason, and in order to do its job, needs a guidebook. Some members of Congress, however, are taking the opportunity to fire away at old, outdated, and unnecessary regulations—even if it’s unlikely the White House and the agencies will be willing to play ball:

Enter Congress, where the general of the war on regulation is Sen. Angus King, (I-ME), who’s pessimistic that the solution will come from the White House and the agencies. “You’re asking the people who are doing the regulating to regulate themselves,” he said, “and I’m not sure that’s going to produce results.”

Now King is trying to rally support for Congress to tackle it. In March, King and Senator Roy Blount (R-MO) reintroduced legislation that would create an independent commission charged with weeding out unnecessary regulations. The Regulatory Improvement Act, as it’s called, is similar to steps King took as governor of Maine in the 1990s to streamline the regulatory process. The law would create a Regulatory Improvement Commission, which would provide Congress with a list of regulations to cut, similar to the way the Base Closure and Realignment Commission is used to identify military installations to eliminate.

The Regulatory Improvement Act did not make it past subcommittee hearings when King first introduced it in 2013, but King is optimistic that it will fare better this time around. He and Blount have added two new cosponsors this time around, Senator Jeanne Shaheen (D-NH) and Senator Roger Wicker (R-MS).

He says the leadership of the Homeland Security and Governmental Affairs Committee has expressed “openness” to considering the issue, and there’s a companion bill circulating in the House that has the support of 14 members—7 Democrats and 7 Republicans.

King, who caucuses with the Democrats, is sensitive to the ideological dimensions of regulatory reform. “Somebody can fly under the flag of regulation reform when what they really want to do is wipe out an agency,” he says.

But what rules can we really do without? Separating truly ineffective regulations from ones that are just ideologically unsavory is the hard part. Republicans and Democrats each have their own ideas about what makes a bad regulation. Beyond the politics of specific regulations, the size of the federal code is an obstacle unto itself.

It’s a problem that now has a solution. With programs like RegData, we can answer the “which regulations really need to go” conundrum with actual data. We can create timelines to show voters and their representatives how agencies have changed, bloated, and become waterlogged over time.

Regulations may come along with fiscal incentives, but I’d be willing to bet that slapping a few examples of decades of government waste into a slick viral graphic could start to create a groundswell of electoral incentive to be a lot more discriminating when it comes to letting hyperregulation at the agencies slide.

It’s groundbreaking work, and it’s something that even activists can use to educate voters about why free-market, small government policies are better for the country.

Looking at that building, and understanding two incompetent bozos are running it… No wonder it’s continuing to go to hell.

But, but, but.. we have a computer program now, and soon our federal government will be waste free.

Disobey. Don’t be sheep. TAKE it back! WITHOUT permission.

The solution is quite simple, actually.

The bureaucracy that FDR created almost single-handedly should be disassembled. All these agencies creating LAWS (which is what regulations are – just done extra-Constitutionally, without Congress passing them), bureaus etc. need to be privatized, made public-private non-profits that are answerable to Congress and/or a board of directors, or simply abolished. Dissolved. Disbanded. Eliminated.

If we had an executive with cojones, that would be proposed, and those under his direct control (e.g. the EPA, NASA) would be done with the stroke of a pen.

It could even be a Constitutional amendment proposed by a Convention of the States to Propose Amendments, which is what it is going to take to truly reign in our out of control federal leviathan.

Give them lifespans/sunsets might help the fearful come on board.

Do you mean the bureaucrats, the agencies, or the laws?

‘Cause I could roll with any of that, personally…

One thing that can be done immediately without costing much is to simply decree that the length of time which things will be done will be doubled. If something is mandated to be done once per year, do it once every two years. Done quarterly – do it bi-annually. Done monthly – do it every two months. It would take a one paragraph document to affect this change and the last sentence should read: No Exceptions. I doubt anyone understands why things are done the way they are now anyway. No need to change all the codes, just double the frequencies already written. Then do it again in two years.

What a creative idea. Let’s start with taxes.

Something that I have observed is that someone with an ax to grind will require the public do something, sometimes to gather data for a post grad degree, sometimes out of bigotry. This added requirement takes on a life of it’s own even after the originator has moved on.

These are junk statistics.

Yes, Washington DC would be a good setting for a movie, Regulators Gone Wild. But just how long it would take to read a collection of regulations and fiats which in fact nobody will read … that’s just a fantasy number. Might as well claim that the fifteenth Encyclopedia Britannica is too long; nobody would seriously propose that as a reason to cut the sixteenth edition down to pamphlet size. You look up only the part you need, and when you find it, you expect to find enough material to answer your question.

Federal regulations cost the U.S. economy an estimated $1.88 trillion in 2014, a sum greater than the gross domestic product of India.

The $1.88 trillion exceeds the combined revenues from corporate and individual income taxes, according to the Competitive Enterprise Institute’s annual report on the cost of federal regulations.

Those costs added up to an average of about $15,000 per household last year. If that bill were paid directly, it would be the second-largest item on the average family’s budget behind housing costs.

At the macro level, the $1.88 trillion cost of regulations dwarfs the FY 2014 federal budget deficit of $468 billion, and equates to roughly half of all federal spending ($3.656 trillion).