Honoring those who served. 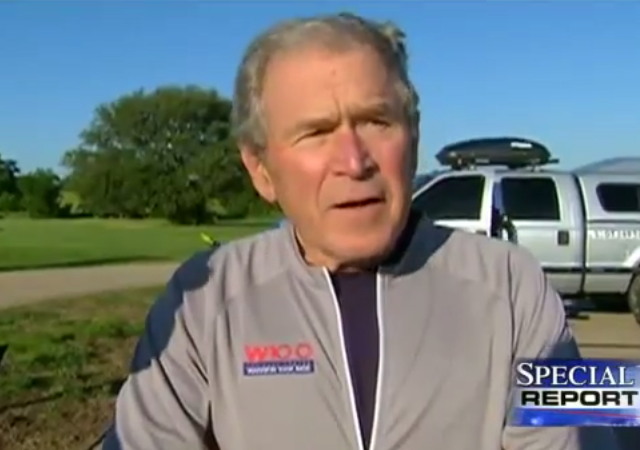 President George W. Bush has been quiet about politics since leaving office but has remained active in his dedication to members of our armed forces.

This weekend, Bush joined a group of wounded warriors for his annual W100K, a 100 kilometer bike ride meant to honor their service and remind others of their bravery.

Fox News’ own Dr. Marc Siegel is riding along with the former commander-in-chief and our nation’s heroes on the three-day journey.

“They’re injured and yet they refuse to allow their injury to consign them to a dull, meaningless life,” Bush told Siegel.

The W100K ride involves about 20 injured service members on a 100-kilometer mountain bike ride near the Bush family’s Crawford ranch.

Siegel noted that for injured soldiers, it’s important for them to successfully transition back to normal life, something many veterans struggle with.

For some, the event is a chance to connect with the president personally.

Veterans and spouses get to know their former commander-in-chief George W. Bush during bike ride

The fifth annual Warrior 100K, which is part of the George W. Bush Institute’s military service initiative, is a three-day bike ride to honor service members injured in Afghanistan and Iraq.

Following Bush’s opening remarks, and with his signature “Let’s ride!” the group took off on the 30-mile trek throughout the ranch.

Army Specialist Marco Vasquez said he was in a Starbucks one day a few years ago when he saw President Bush riding with veterans in the paper.

“I actually started crying, I was like someone gives a [expletive] about us,” he said. “The commander-in-chief still cares. So I thought maybe one day I’ll go, but right now is not the time.”

Vasquez said after being diagnosed with post-traumatic stress disorder and a traumatic brain injury, he found recovery in mountain biking, among other activities and called the weekend “ a huge treat.” He was honorably discharged in 2004.

You can’t bullshit the troopers. GW is a good man. He has always been a good, kind man with a lot of character.

I just wish he had been a Conservative.

I’m of mixed mind here.
Great that he is doing this, but I would much rather it be 100 miles ( a century ) then some girlie-boy 100 kmeters, and I would like to see it done in one day not three.

OTOh, there are injured veterans doing the ride too, so lI can understand it.

Somehow I doubt that GWB sought or had any say in the length or units of the ride. It’s just not his style.

I did not vote for him, the first time. But, he won me over by criss-crossing this country, calming it down, and getting no credit whatsoever from my local paper (then, the Washington Post.) We were fortunate to have him for President, for he was better than he looked at first, and then he grew in office.

Bush has been remarkably engaged with veterans, which explains part of his enduring appeal to soldiers and civilians alike. He acts like one of us.

Imagine, if you will, Barack Hussein Obama doing this… Nope, not remotely possible. Paying true honor to our warriors? Nope. Nada. Nein. Nyet. No F***ing Way.

Nice to remember when Presidents were decent human beings.

But come to think of it, the recent decent ones were all Republicans. You have to go back to Nixon to find a Republican of questionable character. Before him, Harding, if only for the rampant corruption of his close friends whom he empowered.

For the Democrats, you have to go back to Truman for a man of good character, and before him, to Cleveland.