Is this incident partially the result of “enforcer” error? 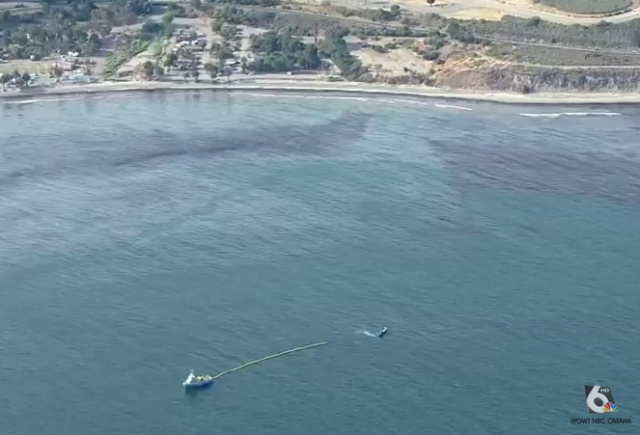 A ruptured pipe sent 21,000 gallons of oil streaming along the coast of Santa Barbara, and workers are valiantly working to contain and control the strong-smelling release that is marring nine miles of prime California real estate.

State and federal officials on Wednesday investigated what caused a 2-foot-diameter underground pipeline to leak thousands of gallons of crude oil that polluted several miles of wildlife-rich beach and ocean along the scenic Santa Barbara coast.

Houston-based Plains All American Pipeline said that in a “worst-case scenario,” up to 105,000 gallons of oil spilled Tuesday from its ruptured onshore pipeline and that an estimated 21,000 gallons swept down a storm drain that empties into the Pacific.

The company said a control room operator noticed “abnormalities” and shut down the pipeline around 11:30 a.m. PT (2:30 p.m. ET). Around the same time, Santa Barbara County firefighters responded to a report of a strong gasoline smell at Refugio State Beach and found oil pouring into the ocean.

At this point, the response crews appear to have the situation controlled. This is a real blessing, because there will no replay of the BP oil spill drama that impacted the Gulf Coast and allowed an opportunity for Obama to grandstand.

The root cause for this incident may be operator error:

Plains Pipeline, the large Texas-based company responsible for the pipe that ruptured in Santa Barbara County, has accumulated 175 safety and maintenance infractions since 2006, according to federal records.

A Times analysis of data from the Pipeline and Hazardous Materials Safety Administration shows Plains’ rate of incidents per mile of pipe is more than three times the national average. Such incidents may include problems with pipelines, storage tanks and drains, among others. Among more than 1,700 pipeline operators listed in a database maintained by the federal agency, only four companies reported more infractions than Plains Pipeline.

…The company’s infractions involved pump failure, equipment malfunction, pipeline corrosion and operator error. None of the incidents resulted in injuries. According to federal records, since 2006 the company’s incidents caused more than $23 million in property damage and spilled more than 688,000 gallons of hazardous liquid.

As an environmental health and safety professional looking at the report, I must ask why, given the records readily available to state and federal officials, no action was taken to force Plains Pipeline to do the required maintenance? The regulations, and associated fees and taxes collected to implement them, are useless unless they are actually enforced.

I would argue that the “operator” may not the only one at fault for this deplorable situation. Lack of enforcement could be a contributing factor. However, I suspect the eco-activists and their political minions will be out in force shortly to demonize “big oil”.

Looking back at history, it turns out that a 1969 release along the same coast gave rise to the environmental movement.

The Santa Barbara oil spill of 1969 spewed an estimated 3-million gallons of crude oil into the ocean, creating an oil slick 35 miles long along California’s coast and killing thousands of birds, fish and sea mammals.

Following the spill, the region became ground zero for some of the most significant conservation efforts of the 20th century.

In the aftermath of the spill, President Richard Nixon signed the National Environmental Policy Act in 1969, which requires environmental impact reports, and the California Environmental Quality Act was adopted the next year, says Peter Alagona, an associate professor of environmental studies at UC Santa Barbara.

Since that time, both the regulations for this industry have expanded and the spill clean-up technology has evolved (and now includes the use of drones).

History has shown there is need for some amount of environmental oversight at a variety of levels, as the amount of pollution across this nation has substantially decreased since 1969. But regulations are useless unless they are implemented.

As the reports continue, I will be monitoring for “enforcer” error rather than “operator” error. It may be that instead of clamoring for new, business-crushing rules, the best course of action is to have our paid officials actually enact the requirements we already have.

Ken Haygood writing for AT discussed the headline appeal od 500 barrels Vs 21,000 gallons. Made sense to me, about a swimming pools worth, according to Mr. Haygood.

Mother Nature does this every day, world-wide. As a kid on Kulhifornia beaches, I had tar on my feet as a “sole” about half the time, as I recall. Tar balls…which is what you have left after a few days of the ocean working on crude oil…were everywhere.

And it’s been that way since time immemorial. The coast of Kulhifornia has always been riddled with “seeps”, on land and off shore. It’s how we knew oil was there.

Mother Nature doesn’t give a care what Leftists, Liberals, and Progressives think.

If “green” California was contracting with an operator with a poor safety and spill record, it had to be because it was a substantially lower bid than the rest.

Or the operator sufficiently greased the California Democrat Machine.

This is nature’s nutrient to feed the base of the ecosystem. The key is to control accumulation and distribution in order to protect higher forms of life and people’s playgrounds.

Petroleum — the product — is both green and renewable in context and with moderate consumption. Whereas “green” technology is neither environmentally friendly nor renewable. Only the driver (e.g. wind, solar) has a nominally neutral impact on the environment and is independently renewable.

21,000 gallons is about 1 rail car. Train derailments have the potential for dozens of similar size cars to leak, rupture, or burn per incident.