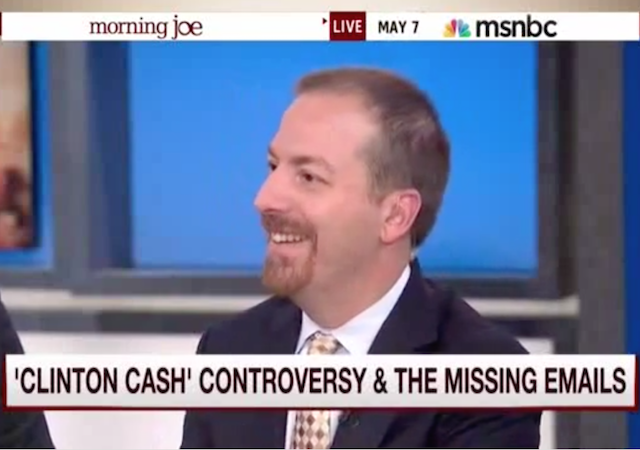 Campaign work is filthy business sometimes. Manipulating the media cycle is a full time job—especially if your boss is a corrupt career politician who may or may not have made deals with foreign governments in exchange for speaking fees.

Hillary Clinton’s staff did a bang up job pivoting away from that whole “corrupt career politician” thing this week by flogging Clinton’s newfound enthusiasm for immigration policies that are even more radical than the ones President Obama has backed. Meet the Press host Chuck Todd pointed out today how Clinton’s team used controversy to distract the public from controversy—and succeeded.

“It was a surprising rollout of her immigration policy, sort of the first time that she had rolled out any policy,” Todd said.

“I think that was their one hope, that they could at least step on, hoping to slow down the Bill Clinton story. I always wonder did they mean to roll out any policy before she actually formally announced? I bet you they didn’t, but then it was suddenly it was, ‘let’s eat up a news cycle and slow Bill down.’”

It’s an impressive little coup from a team that, until very recently, has done very little to curry favor for its boss. It also showcases the formidable power of Hillary Clinton—at least in terms of getting what she wants from the media.

The “Clinton Cash” story isn’t going to stop being a story any time soon; the book launch, coupled with the rising influence of conservative new media and a slate of not-yet-gun shy Republican candidates will make sure of that. We need to recognize this “immigration policy rollout” for what it was: a test.

Team Hillary is bruised. They know that the eyes of the country are watching for the next cartoonesque slip up, and are making moves to test their ability to turn the narrative around (even if it’s just for a short time.) In the video above, Todd notes that there’s a big difference between facing major opposition from the voter base, and opposition from opposing party leaders in Congress. Truer words were never spoken, and it’s something that conservatives need to keep in mind when deciding what stories, memes, and videos to push out to undecided voters.

The American public is used to the Republican party’s attacks on Hillary Clinton. It’s expected—that’s why Team H was able to flip the narrative so effectively. Conservatives are still building steam behind the latest oppo, and once her long-awaited testimony before the House Select Committee on Benghazi starts to roll out, we’ll see a lot of momentum build behind the anti-Hillary messaging.

Allowing Clinton to control the narrative—even for a second, even for a single cycle—is dangerous. If they can manage to flip the cycle with a gameday policy rollout, imagine what they’ll be able to do given more time.

I heard Ol’ Walleye’s immigration remarks yesterday, and was floored at the condescension and insult inherent in them.

We’re all gonna do better when we have everybody earning the mandated wage?

HTF does anyone even say such a thing? Because, first and foremost, we have tens of millions of AMERICANS NOT WORKING now. Their WAGES are ZERO. They aren’t gonna do better when they have TENS of millions of NEW competitors, either.

How are we even talking abput her being POTUS? She belongs in prison. Full stop.

Why not POTUS? (Prison Of the United States)

A rare moment of clarity and honesty from Todd.

Of course she needs to change the subject. She has avoided commenting on ANY issues so far, even current events, by not allowing questions from anyone but Democratic shills. But a sudden controversial announcement, even as the curtains are being drawn back over her shady practices?

Obama and then Hillary? A neo Communism grasp for power by any means necessary in a country that has no place for them. The only thing either of these Comrades are fit for is head of the Democrat party.

You the MSM POSs in a nutshell, Chuckums.

She’ll once again humiliated and be elbowed out of the way.