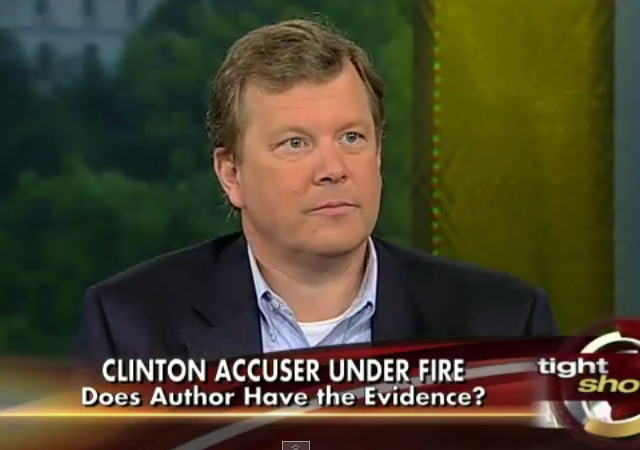 You can tell ‘Clinton Cash’ author Peter Schweizer has touched a nerve by the amount of push back he’s getting from the media. U.S. News & World Report wonders if the book is just a hatchet job, while Newsweek has written an “Everything you need to know” piece on the book.

Schweizer appeared on the FOX News program Media Buzz this morning, and Howard Kurtz grilled him about assertions made in the book. Towards the end of the interview, Kurtz makes an issue out of Schweizer’s political affiliations as evidence of his inability to be objective.

That never seems to be an issue on the other side, even though the Obama administration has been a virtual revolving door for members of the media.

Watch the entire exchange below:

Ben Kamisar of The Hill:

The Hillary Clinton campaign is hitting back against Peter Schweizer, the author of a controversial book that questions Clinton’s impartiality while at the State Department, attacking him for referring to himself as part of the conservative cause.

The Clinton camp has honed in on Schweizer’s comments at a 2014 summit sponsored by the conservative multimillionaire donors Charles and David Koch, where he gave attendees a call to action.

“The question is: Are we going to let up? And I would contend to you that we cannot let up.”

“This is the clearest evidence yet that this widely discredited book is part of a coordinated Republican attack strategy,” he told The Hill exclusively.

“The author’s remarks at a Koch fundraiser pull the curtain back on his true purpose in going after Hillary Clinton and the Clinton Foundation.”

Peter Schweizer is not the story here, but the media will try to make him the story.

As long as they’re talking about him, they don’t have to talk about the Clintons.

“The author’s remarks at a Koch fundraiser pull the curtain back on his true purpose in going after Hillary Clinton and the Clinton Foundation.”

OK. Let’s say, arguendo, any of that is true.

How does that in any way exonerate Ol’ Walleyes or Ball-less Bill or their slush fund/influence bazaar?

Right. The question is, are the allegations in the book true? If he’s got the sources and correct information, then his political affiliation isn’t the point.

When the left brings in the Koch Brothers, they have lost the argument. They toss around the Koch Bros, like they have the rAAAAAcist comment.

The big problem is that the left doesn’t care about facts, truth, or even reality. They only care about “the narrative” which is their alternate reality, and they will close their eyes, stamp their little feet, and have a trigger event if you dispute the Narrative!

“They only care about “the narrative”……which is reinforced daily by the “Democrat Operatives posing as journalists”.

Sounds like Godwin’s law could use a Stan25 corollary!

I’m with Rags. Suppose he were a hyper-partisan hack. So what?

He didn’t give the Clintons the millions or approve the Russian uranium deal so a Clinton crony could get richer, did he?

The media was able to hide Obama’s radical record and history because it was very much inside baseball. Money for favors is something even a Democratic voter can understand. Everyone understands bribery. They won’t be able to cover it up forever.

“Money for favors is something even a Democratic voter can understand.”

Has Terry Lenzner stomped is cat yet?

This is the sort of thing that drives me insane.

The real issue was what Obama himself said about his agenda, on video. But the MSM managed to make the entire issue Joe the Plumber’s saintly perfection or lack thereof.

Yep, being an active Fellow at the Hoover Institution shows what a lightweight gadfly Peter has to be…Right..? Ya know, like Robert Conquest, Victor Davis Hanson, Condi Rice..

“Georgie Stephie” A Perfect Example of a “Democrat Operative posing as a journalist”.

When did that happen?

Who is it that is revising their tax forms as a result of what’s in the book?

It didn’t happen, of course.

Well his next book is about Jeb Bush. So, if the media use his “bias” against his reporting on Hillary how will they be able to affirmatively use any information he comes up with on Bush? I know they will figure out a way and what is truly revolting is the lengths to which they will go to excuse corrupt behavior. Sick making.