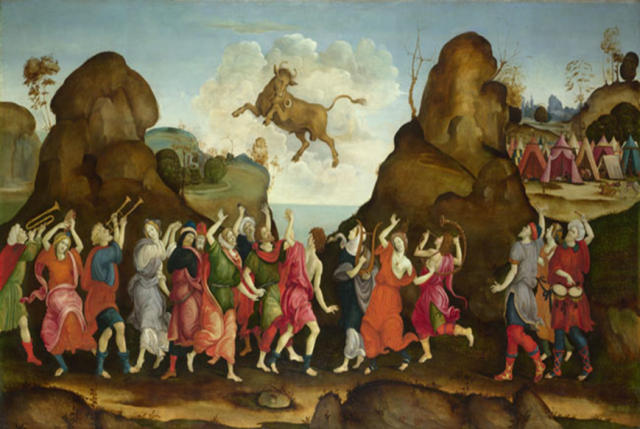 The ancient Egyptians worshipped divine bulls...and now it seems to be paying off!

The country’s stock market has gone bullish after it halted capital gains taxes.

Egypt suspended a capital gains tax on Monday, sending shares soaring after a months-long downturn in which investors had complained of a lack of clarity about the new taxes, with some even taking the government to court.

Immediately after the announcement, Egypt’s EGX 30 index rose 3.3 percent to 8562.07, according to Egypt’s official news agency. By late afternoon, shares were up 6.5 percent.

President Abdel-Fattah el-Sissi approved a law nearly a year ago which placed a 10 percent tax on capital gains, fueling a sell-off by investors in an economy already battered by years of political unrest since the 2011 uprising.

The law had been part of a broader government effort to broaden the tax base as it pushed through a host of tough measures, including slashing fuel subsidies, amending the property tax law, imposing a 10 percent tax on stock dividends and allowing the Egyptian pound to devalue somewhat against the dollar.

Contrast that with President Obama, who used America’s moms as an excuse to propose capital gains tax increases.

In a wide-ranging interview with Vox, Obama discusses his proposal to raise capital gains taxes on couples making more than $500,000 a year to help pay for middle-class tax breaks. The rate would go from 23.8% to 28%.

Obama tells Vox’s Ezra Klein the capital-gains proposal “would make a big difference in our capacity to give a tax break to working moms for child care.” And, says Obama: “There’s no evidence that would hurt the incentives of folks at Google or Microsoft or Uber not to invent what they invent or not to provide services they provide.”

I guess we should be grateful that Obama’s proposal isn’t higher. In fact, during Hillary Clinton’s run for the presidency in 2008, the two of them debated exactly how much capital gains taxes needed to be increased. I suspect her policy toward the matter has not evolved much, either.

In contrast, our stock market is in flux as a result of trying to process the chaotic, business-unfriendly policies that have been a staple of this administration.

Stocks deflated from session highs in the late afternoon session on Wednesday as Wall Street digested the minutes from the latest Federal Reserve meeting that suggested a rate hike in June was off the table.

…Investors are “getting confused by what they believe the consensus of the Fed is,” said Kevin Mahn, managing director of Hennion & Walsh Asset Management, in a call. “The Fed … [is] putting the doubt back in that it may not happen in June. The question then becomes, does it happen in September? If second-quarter GDP disappoints, does it happen in 2015 at all?”

So while Egypt enjoys its bull market, we get to experience the “Great Reset”. Welcome to the new normal!

“There’s no evidence that would hurt the incentives of folks at Google or Microsoft or Uber not to invent what they invent or not to provide services they provide.”

But this is the same guy who thinks there is absolute evidence of Gorebal Climate Thingy.

That said, I wonder why fiscal responsibility has suddenly become his cause.

But his deficits would have brought down the government if interest rates were closer to normal. That may be the real reason the FRB is putting their own banks in awkward positions with their balance sheets to maintain these crisis-level interest rates near zero.

“The ancient Egyptians worshipped divine bulls…and now it seems to be paying off!” Really? Interesting implications you got there, Leslie. I wouldn’t want to mount a challenge to them,

People tend to leave money in investments when they will have to pay a significant tax on the gains when they sell, even if they would rather invest in something else now. It’s psychological, but also demonstrably true.

This hurts the economy by dragging on growth. It interferes with the naturally efficient allocation of resources. New start-ups and innovations suffer the most.

When rates are reduced, all the accumulated passive investments that were only held to avoid the taxes are sold, the taxes are paid (although at the lower rate), giving a flush of revenue to government, but more importantly, the funds go looking for the most promising new investments.

The “Clinton economy” and the “Dot Com Boom” were fueled by the GOP capital gains tax cut of the ’90s, which came just as new companies and technologies were poised for breakthroughs. Suddenly the capital became available and – wham! bam! thank you Monica! – the so-so economy became a go-go economy.

I do not think there should be any capital gains taxes – inflation takes care of that in the long term – but I especially do not think that people who make bad investments should be rewarded with tax deductions.