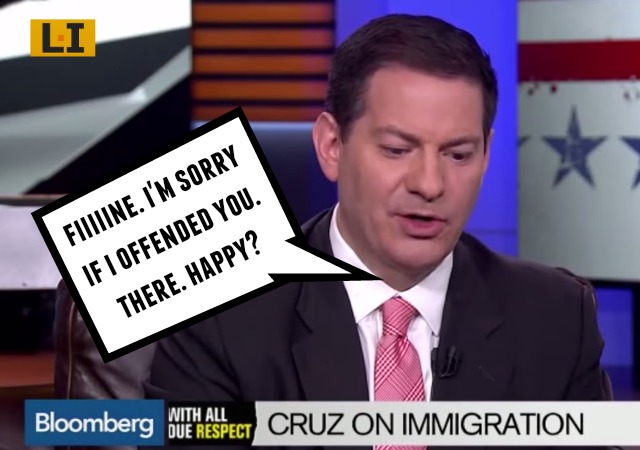 In a series of bizarre questions, Halperin grilled Sen. Cruz on his Cubaness.

The interview was so bad, the left-wing group Think Progress condemned it as, “the most racist interview of a 2016 candidate.” Think Progress came to the same conclusion as many on the right: Halperin seemed determined to get Cruz on the record about the minutia of his Hispanic heritage.

Facing the wrath of the Internet, Mark Halperin released an apology today:

My apology regarding a recent interview with Senator Ted Cruz. http://t.co/unovSDhchw

The text of the apology reads:

Sen. Cruz, who handled the whole ordeal with impressive graciousness, made the following statement late today:

Mark Halperin is a serious and fair-minded journalist. Today he kindly issued an apology for some silly questions he…

Though the interview was cringeworthy, props to Halperin for apologizing. It was the right thing to do.

Judging by what we’ve witnessed so far, the 2016 race will likely be a completely different ball game for the talking heads who think they can score cheap points on GOP contenders a la 2012. Not only are candidates more comfortable holding firm boundaries with intrusive press (see media maestro Carly Fiorina for example), but the politically active public is less willing to offer a pass to media intentionally seeking to railroad the GOP’s best and brightest.

Of course that was the entire intent and goal of his (Halperin’s) interview!

Ah gee, she meant well. Besides, shouldn’t everyone get a “we tried” trophy, even when they ain’t so good speler?

Cheers, and ever upward!

Thanks so much for the suggestion, but all dictionaries indicate either spelling is acceptable.

Aren’t we arguing about minutia…um…minutiae here?

“minutia” is singular; “minutiae” is plural 😀 😀

Mark Halperin is a racist. Period.

Damn, Halperin neglected to ask whether Cruz likes burritos, guacamole and tequila. And, whether he knows how to hand-roll cigars. Or, if he constantly plays “Buena Vista Social Club” on his CD player. This could have yielded some true insights about Cruz.

Halperin didn’t have to apologize to Cruz – just to Bloomberg for accepting a paycheck.

What ever he was forced to say it is nice to know that Halperin and perhaps Bloomburg had an awkward moment of intense discomfort when they realized they are not as clever as they think they are and we all think they stink.

“I also understand why some felt that the questions were inappropriate” is NOT an apology, damn it! It’s simply code (yes, code) for “you’re too stoopid to appreciate my insight”. Keep the pressure on Halperin and Bloomberg.

But was he truly sorry he asked the question? Heck no. He was only apologizing to those he offended. He would have no problem doing it again.

Non-apology apology IMO. The “to those that were offended” phrasing still really says, not my responsibility, you rubes.

Isn’t this the same Helprin who finds out all kinds of stories relevant to an election before the election, but does not publish any of them until after the election in a post-election book?

I do not believe Helprin was trying to prove anything. I think he was trying to keep the time Ted Cruz had, for discussing any serious matters, to a minimum. Then, others could comment that Cruz did not have anything worthwhile to say.

We’ve seen this before.

Halperin was clearly going for the big Gotcha and it backfired, making him look….. no, revealing what an idiot he is. He thought he’d come out of this a hero on the left.