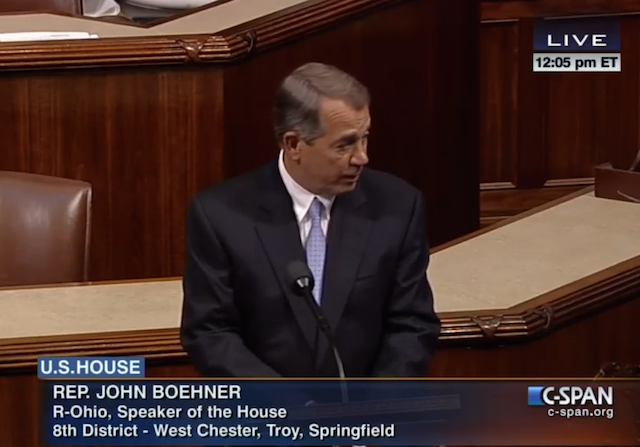 It’s another failure of the “Have a problem? Throw money at it!” strategy democrats know and love so well—but this time, it’s happening at the expense of veterans.

It’s been nearly a year since Eric Shinseki resigned his role as VA Secretary, and yet things are no better for veterans than they were before the embattled bureaucrat finally relented to demands from Congress that he step down. Of course, lack of leadership wasn’t (and isn’t) the agency’s only problem; reports last year unveiled not just one or two corrupt officials, but an entire network of people willing to sweep problems under the rug.

House Speaker John Boehner made a speech today shedding light on the continuing problems at the VA, and calling the Obama Administration on the carpet for allowing disgraced VA officials to be rewarded for their failure.

The VA’s problems are so deep it can’t even build a hospital, Boehner said, referring to a half-finished project in Denver that is $1 billion over budget.

Boehner, R-Ohio, said he is especially frustrated that so few VA officials have been fired, despite evidence that at least 110 VA facilities kept secret lists to hide long wait times.

Instead, many officials have been allowed to retire with full benefits, while others have been transferred, suspended with pay or given a “slap on the wrist,” he said. “And all of them go right on collecting checks from taxpayers,” Boehner said.

“If only the VA did half as good a job taking care of our veterans as they do their own bureaucrats,” he said.

Boehner said a law passed last year by Congress should help and said more legislation to hold the VA accountable is likely. “But only the administration can change the culture from within,” he said.

You can watch his speech here:

One person fired—but “what the hell happened to the rest of ’em?” The Administration really wishes we weren’t paying attention to that small piece of information.

Highlighting the continuing problems at the VA is the ongoing disaster encompassing the construction of the new Denver VA hospital. The work is behind, and over budget by literally hundreds of millions of dollars—and now more money is needed just to get the project back on track:

Lawmakers must authorize new funds to continue work on the infamous site by the end of May and avoid another work stoppage by construction contractors. The project’s costs have ballooned from under $400 million to more than $1.7 billion in recent years through a combination of poor planning and lax management of the work.

But last week, the chairmen of the House and Senate Veterans’ Affairs committees rejected plans by VA officials to shift about $800 million from money set aside for health care access expansion, putting the Denver project’s future in doubt.

“VA to this day has refused to take this project seriously,” Rep. Jeff Miller, R-Fla., and Sen. Johnny Isakson, R-Ga., said in a joint statement. “Instead of putting forth a realistic plan … VA has essentially demanded that taxpayers subsidize the department’s incompetence.”

Sen. Richard Blumenthal, D-Conn., the Senate committee’s ranking Democrat, echoed that sentiment, noting that the Denver disaster is just one of a series of major VA construction projects currently over budget. He said the department “must go back to the drawing board” to find a new way to pay for the project.

It’s true—shouldn’t we be looking to the VA for solutions beyond another blank check? Other side of the coin: do we trust them to not stab themselves in the face with a pen whilst performing whatever complex math it takes to fix a billion dollar money pit? VA Secretary Robert McDonald wrote a letter to Congress requesting a $200 million buffer fund to get things back on track, and lists different areas of the budget that the VA can modify to help pay for the project. However, he also warned that a failure to act in Congress could lead to another contractor walk-off, which signals to anyone paying attention that no amount of creative accounting is going to help the VA fix its own mess.

Boehner is right—this isn’t just a failure of leadership. The culture at the VA cultivates nothing but failure, excuses, and waste, and nothing but a complete overhaul is going to fix that.

Why not take all the money they spend on bonuses and get the hospital built. Then forbid any bonuses until the back log of patients is cleared. Maybe then some of the a$$hole administers would quit.

Why not vote in a GOP speaker with balls larger than a squirrels’?

Then you’ll see some action on issues like the V.A. ‘intentional’ negligence, the outrageous IRS scandal, etc, etc, etc.

That will only encourage the VA employees to kill off more of the vets.

As a medical intern in the seventies, I spent several months at the Washington, D.C. VA hospital. This was pre-computer time for the most part but the D.C. VA had a computer system that ran everything- except when it didn’t which was most of the time. The staff of the VA were the most surly, disagreeable, and unhelpful people I ever met. And, to be honest, racist.

In the 1980’s I worked for about 8 years at the San Diego VA. A much better place, but I used to comment then that the hospital was a political system which dabbled in medicine rather than the other way around. I’m sure it is no less true today, and perhaps more so.

Most of my career was spent in private hospital based work. The private system is much superior to the VA in every respect.

The VA as a medical system should be eliminated. Let it continue to keep track of veterans, evaluate disability applications, provide benefits, etc., but get it out of actual medical care.

Want to fix it? Break it down. Down to the ground. Let vets get their health care on the COMPETITIVE ECONOMY (which kinda means we have to HAVE one.)

Replace it with TriCare. Let the VA pay the premiums for all those that would normally qualify for VA medical care. Zero deductible, zero co-pay.

Makes sense, which is why it will not happen. No opportunity for democratic boodle.

This is Obama. Hates military, wants to eviscerate the US military. One way to help do that it is to make VA benefits and delivery thereof a joke of ineptitudes, to lower enlistments. You see, that money is deeply needed for important “investments” in the cities and union towns, to be kicked back to Democrat campaign funds down the road.

This is why left-wing ideologies fail in 9 out 10 trials, and the tenth is a failure in progress. There needs to be a separation of State and monopolies.

When he thought it was safe, Boehner squeaked.

Now, he’s back into hiding.

Congress ignoring the elephant in the room at VA. People filed fraudulent paperwork about waiting lists (at least), then received bonuses. The number one question they should be asking the VA is, “How many of these people are in prison?”

Oversight is a joke when you just complain about the costs and ignore the crimes.

What I don’t understand is why those VA employees who defrauded the government by denying vets medical care haven’t been charged with a crime? Fraud should be easy and murder for those who died because they were denied medical care.

Yes. The words, “depraved indifference to human life” come to mind. You should at least be able to get manslaughter out of that.