Get over it, man 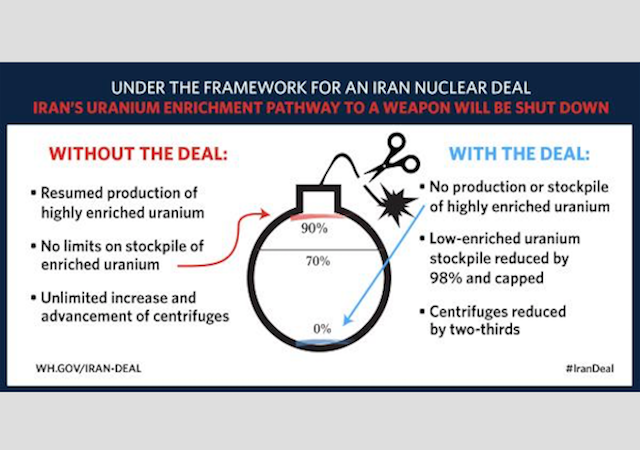 Back in 2012, Israeli Prime Minister Benjamin Netanyahu stood before the body of the United Nations with a piece of poster board and a red marker. During the two weeks prior to that moment, he had been waging a public battle with the Obama Administration over the dangerous progression of Iran’s nuclear program—sound familiar—and made the decision to cut through the rhetoric in hopes that a visual aid might wake up the rest of the world.

So, he picked up his marker and drew a literal red line that served as an ultimatum: “At this late hour there is only one way to peacefully prevent Iran from getting atomic bombs, and that is by placing a clear red line on Iran’s nuclear weapons program.” 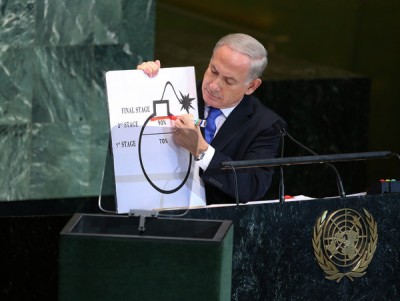 Yesterday, the Obama paid passive-aggressive homage to Netanyahu’s famous “bomb” with one of their own:

Worth sharing: Here's how the #IranDeal would shut down Iran's pathway to a nuclear weapon → http://t.co/BWuabs0TNz pic.twitter.com/8aYQi2KEgq

Rude. And childish. And weird. I’ll call it “frat boy revenge,” because that’s what it feels like. You can tell that someone in the Obama comms shop has been waiting for years to whip this one out.

I laugh because it’s true—and sad. The White House has doubled down on what they claim is a “framework” to prevent Iran from acquiring a nuclear weapon, even though they’ve already been exposed as malicious fraudsters:

There is no Iran nuke “deal,” but whatever there is to the framework, even Obama now admits it paves Iran’s path to the bomb, albeit on a delayed fuse, as AP reports, Obama says Iran could cut nuke time to near zero in 13 years:

Defending an emerging nuclear deal, President Barack Obama said Iran would be kept a year away from obtaining a nuclear weapon for more than a decade, but conceded Tuesday that the buffer period could shrink to almost nothing after 13 or more years.

Obama, whose top priority at the moment is to sell the framework deal to critics, was pushing back on the charge that the deal fails to eliminate the risk because it allows Iran to keep enriching uranium. He told NPR News that Iran will be capped for a decade at 300 kilograms — not enough to convert to a stockpile of weapons-grade material.

“What is a more relevant fear would be that in Year 13, 14, 15, they have advanced centrifuges that enrich uranium fairly rapidly, and at that point, the breakout times would have shrunk almost down to zero,” Obama said.

It’s not at all clear that 13 years is the correct number, as opposed to 10. But regardless, the point is that at the end of this process Iran is ready to produce a bomb.

The thing is, we knew this was coming. Netanyahu said it during his address to Congress.

Yet here we are, tucking our tail between our legs and using Twitter as a weapon against the honor of a man who knew better.

Every time I forget what it means to live in Obama’s America, they do something like this to remind me.

I know this was sarcastic but please…let there never be trigger warnings at LI.

Um, no sarcasm at all. I meant it as posted. Get out of my head!

The notion that Iran is undeterrable—“it’s simply not the case,” he added. “And so for us to say, ‘Let’s try’—understanding that we’re preserving all our options, that we’re not naive—but if in fact we can resolve these issues diplomatically, we are more likely to be safe, more likely to be secure, in a better position to protect our allies, and who knows? Iran may change. If it doesn’t, our deterrence capabilities, our military superiority stays in place. . . . We’re not relinquishing our capacity to defend ourselves or our allies. In that situation, why wouldn’t we test it?”
—Barracula to Tom Friedman (liar to idiot)

So. Pres. ScamWOW is ready to roll the nuclear bones on completely (at least) debatable setsssss of suppositions, the first being that Iran is “deterrable”.

But I’d answer, “Why would we DREAM of testing it? Why wouldn’t we…as Barracula swore sometime back…NEVER allow Iran a nuclear weapon? What changed?”

This isn’t the only deal possible. Imagine Reagan’s deal. Iran isn’t the boss here, dictating terms to the rest of the WORLD.

And suppose that NO deal with Iran is possible. That DOES NOT mean we have no options, including sanctions and our ability to sabotage or openly attack their stuff.

What deal? There is no deal. Iran has agreed to nothing. Kerry has simply given up trying to negotiate with himself and the WH is trying to somehow spin this as something other than a total failure. So far their spin has been no more successful than their negotiations.

Iran needs to withdraw their statements and actions (through proxies) of existential threats to Israel and Arab neighbors and they too can join the nuclear club.

Obama needs to explain his vision of a reformed post-WW II order in the Middle East, Africa, Asia, etc. So far, it seems to consist of little more than proactive regime change, nurturing terrorism, exposing Americans, and opposing traditional allies.

— No production or stockpile of highly enriched uranium . . . (but we’re not ever going to allow you to verify that)

— Low-enriched uranium stockpile reduced by 98% and capped . . . (but we’re not ever going to allow you to verify that)

Seems like Barry left a few details off his graphic.

Rude. And childish. And weird.

I wouldn’t call it “frat boy revenge”, though. Obama seems like he’s developmentally stuck around junior high school age. He’s seething over the fact that everyone – peers, teachers, parents alike – keeps talking about how popular and smart and accomplished that Bibi character is.

He’s the kind of kid you’d want your school resource officers to keep an eye on, to make sure he doesn’t turn into a school shooter or slip a pipe bomb in that Bibi kid’s locker.

Doesn’t he act just like a spoilt, brat 2-year old?

Well at least we know Obama’s listening to BiBi!

Call me a Reagan cowboy, but here’s what I promise to do once elected President:

a. If you fail to convince me you are in process and near completion of destroying everything mentioned above, I will order a one-night air raid bombing of Teheran at an undetermined time toward the end of your twelve week deadline, as proof of my seriousness on this issue.

b. If you fail to convince me you have destroyed all by the twelve week deadline, full sustained bombing of Teheran will commence until it is reduced to rubble.

We will fight you with the only weapon you respect. Your move, Iran.

So, candidate Hawkins, you’re saying that the claimed impossibility of destroying facilities buried in a mountain is irrelevant because there are many other ways of attacking?

Yes, I am. If Iran places its nuclear industry out of the reach of military intervention, that is, if we can’t destroy the facilities, they leave us no choice but to make Iran destroy it themselves.

You forgot one Henry.

3. “Accidently” whisper by an open mic “We begin bombing Iran in 2 minutes.”

We don’t say it, but we know that one thing REQUIRED for nuclear development is electrical power. And LOTS of it.

We have these nice, not very destructive, bombs that take out power grids.

Oh, and a few days after the raid, we issue a nice, gilt-edged invitation to join us at the conference table.

“Can you hear me now, Mohammad?”

Exactly. This is all tongue-in-cheek, of course, my response to the bullshit argument that since the Iranians have placed their facilities deep underground, literally inside a mountain, there can be no military resolution to the Iranian nuclear weapon threat.

The 19,000 centrifuges require three phase AC voltage to power their variable frequency drives (VFDS). So an electromagnetic disturbance or severe damage to a dam would stop the electrical grid generators.

I wonder what European company is supplying the VFDs and control systems to Iran. A Germany company named Siemens AG?

Where’s Stuxnet v. 2 when you need it?

No, they way the U.S. military does bombing (if standard protocol is followed) is to first hit their air defenses, with cruise missiles or with drones.

The object is never to place U.S. military personnel in a location where they can be hit by anything the enemy has.

And in this case maybe knock out Hezbollah’s missiles too, but only after ramping up air defenses for Israel..

After about a month of bombing or more, they would be able to get at their nuclear installations.

That’s why Obama says the alternative is war, because if he did it, it would be a full fledged war.

I didn’t want to do it, gave you every chance, but with this post you’ve left me no choice but to go all Blackadder on you:

Judging from what the Iranians, the Europeans and the White House are saying, the three conflicting statements give no confidence of any ‘deal’ at all.

The White House needs to learn what any third-world housewife knows about bargaining: how to walk away from the table and tell the other party to come back with a proposal when they’re serious.

Iran WANTS an immediate end to sanctions – which are under Congress’s powers. Let Iran lay on the table what it will do to obtain that end, and see how Congress likes it.

And now Iran says, or it is reported some high officials are privately telling each other in an attempt to quiet opposition to the deal or something, that the day the deal is signed, they will start using (or at least testing) some better and more advanced centrifuges.

According to the FARS report, “Iran’s foreign minister and nuclear chief both told a closed-door session of the parliament on Tuesday that the country would inject UF6 gas into the latest generation of its centrifuge machines as soon as a final nuclear deal goes into effect by Tehran and the six world powers.”

This is the original source:

Let’s see if I understand this correctly. With a snip, the inhabitants currently in the white house, shortened the fuse.

Oh, and since big words don’t count with those idiots what can be said? Yemen’s on fire. Kerry said “he notices.” And, Saudi Arabia is lobbing strategic weapons at a whole bunch of “houti-smooty.”

The iranian mullahs also got a strongly worded letter. It looks like it was written in crayon.

Why won’t Israel take action today? Because the obama-nuts own the media. It’s an attack delayed. While Bibi remains a silent partner. Because he never fans the flame with words.

How many prime ministers have actually flagged and gotten the attention of Americans?

Isn’t Bibi just biding his time, now? Heck, he hasn’t even handed out portfolios. That “bomb” is closer to going off under obami’s behind then just about any other.

The collective power of the nations opposing Iran withers at the opposition from the little centrifuge that could.

Ah, the flaccid frivolity of the UN!

Next thing you know Obama will be show up on Let’s Make an #IranDeal.

This should read: Next thing you know Obama will appear on “Let’s Make an #Irandeal” game show hosted by John Kerry.

There was an electromagnetic disturbance which affected the sentence above.