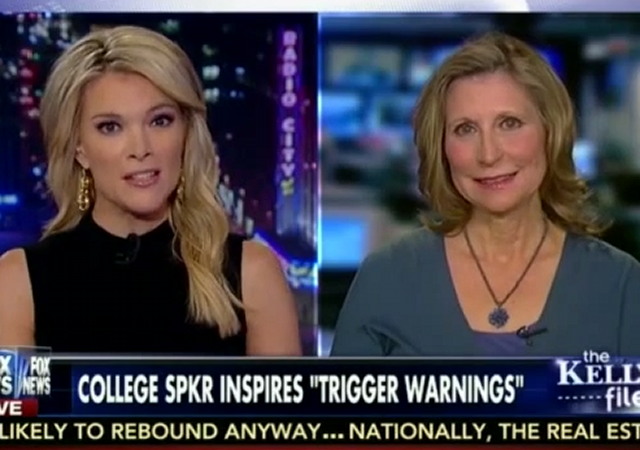 You may have heard that Christina Hoff Sommers recently spoke at Georgetown and Oberlin.

Will any Oberlin students need a safe space on graduation day?

Can you guess which movie is still triggering some college students?

Let’s hear it for the University of California.

Putting the “high” in higher education.

Disrespect for our flag is outrageous.

What a great idea.

Ooooooo! Trigger Warnings. Prepare to retire to your fainting couches with a case of the vapors.

What ever happened to “I am strong. I am invincible. I am Woman. Hear me roar?” These bimbos are making the moslems case for them. Women are too flighty and irresponsible to be let out alone. They must be kept in purdah, and only go out in a burkah under the supervision of a competent male.

Did anyone have a trigger moment when Mumia was the commencement speaker at Oberlin College a few years ago?

My son will graduate soon from the same college that I went to for undergrad. He serves as an RA there and over the past 4 years we have discussed how very different students are treated there now from when I was there. That difference is gob-smackingly astounding.

The kids there are molly-coddled to such an extent that I hardly recognize the experience my son has had compared to the fun I had as a student there.

Much of the blame for the current situation resides with parents, who simply refuse to allow their children to grow up. The people running the schools also deserve some of the blame, as they have not had sufficient backbone to stand up to many of the ridiculous demands of some parents.

What a world we live in!

The US is now ranked only 15th in the world as a ‘happy’ nation.
http://www.livescience.com/50614-happiest-countries-list.html

Tolerating these morons since the 60’s is why. Give them an inch, and they take a nation.

It’s so crazy, even Bruce Jenner is confused. (Related: soon, ‘Michelle’ Obama will soon come out: “I am a man trapped in a transvestite’s body.”)

UT-Arlington Philosophy Prof. Keith Burgess-Jackson’s trigger warning notice is inspired and comprehensive. It’s warning should deter the simple minded and send them running back to their safe place where they can clutch their blankie and suck their thumb.

Perhaps this warning should come with a couple of signs to post on his door: “No Emo” here like the “No Firearms Allowed” signs posted on Starbucks and other wimpy merchandiser’s windows and “Danger: Critical Thinking Ahead! Proceed With Caution!”

Perhaps he should also add an appendix trigger warning: whatever you do do NOT read Fyodor Dostoevsky’s (a Russian novelist (1821-1881)) thought provoking presentation of the problem of evil in his “The Brothers Karamazov”. There, one would find man’s most pressing concerns in story form, concerns about God, good, evil, suffering, doubt and faith.

That reading is heavy lifting for such small strained-meal minds.

I believe that “Trigger Warnings” and “Safe Places” are symptomatic and unwitting indicators of an increasingly lawless society.

Millennials are creating their own boundaries to replace the abstracted, amoral and nihilistic philosophies that have catered to Identity Politics and Mother Gia, among other mal-formed issues.

Under such demoralizing leadership, certain segments of society are given privilege and other segments are verbally and legally disparaged. Justice is supposed to be blind but Al Sharpton and hundreds if not thousands of college and university professors forsake justice for “social justice” or an ‘evening-out’ of society by an essentially an amoral, Marxist and intellectualized “Nudge” process.

“Trigger Warnings” and “Safe Places” will increase in proportion to the encouragement of lawlessness of our culture. What can you do except create a “Safe Place” to keep out all of the confusing, wrong, evil, counter-intuitive thinking bombarding you daily?

The safest place: “Keep me as the apple of your eye; hide me in the shadow of your wings.” Psalm 17:8