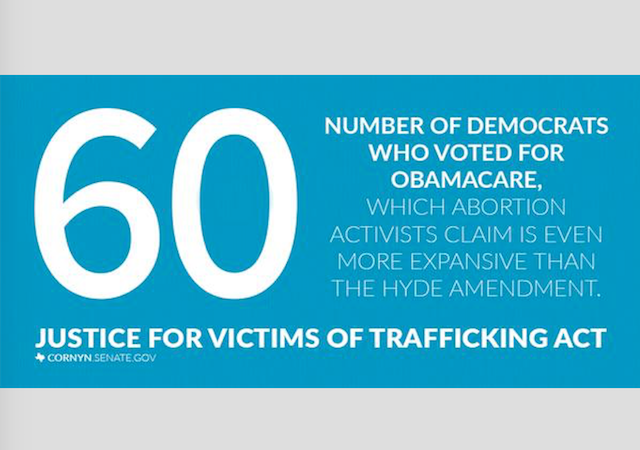 Democrats in the Senate are playing politics with a bill that would take major steps to protect the victims of human trafficking. The Justice for Victims of Trafficking Act, a bipartisan effort spearheaded by Texas Senator and Majority Whip John Cornyn, would would crack down on traffickers themselves, while providing more resources to the victims of modern day slavery.

Democrats are blocking the bill because of language that would use the Hyde Amendment to prevent fee revenue from being used to pay for abortions. They’re posturing on the issue in an effort to look strong on women’s issues, but the mainstream media is turning on the minority caucus. Some of the nation’s most widely-read publications have come out in favor of the bill, in spite of its invocation of the Hyde Amendment.

The Washington Post ed board has their quibbles with the bill, but they still want Dems to do it…for the children: 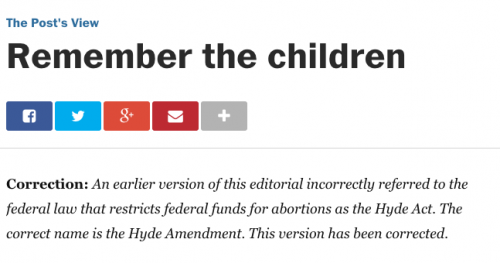 IT IS estimated that 100,000 children each year are trafficked for sex in the United States. Lax laws and modern technology enable the predators, while their young victims often are treated like criminals instead of getting the help they need. Congress last week seemed poised to do something about this. Then politics intervened. This week the question will be whether senators can put the interests of scared, abused children ahead of the chance to score political points.

The Baltimore Sun takes a more liberal perspective on the idea of using the Hyde Amendment to limit treatment (in this case, abortion is the “treatment” being limited) but they’re still going to side with the JVTA:

In more ideal circumstances, women would be free to make personal, private and legal health care decisions on their own without such interference from Congress. The House version of the bill doesn’t contain the anti-abortion language, incidentally. But Senate Democrats can’t allow the perfect to be the enemy of the good — the legislation provides law enforcement across the country additional resources to combat human trafficking and collects funds to compensate victims. To this point, it has had strong bipartisan support. The Democrats don’t have the numbers to remove the offending provisions, only to filibuster the bill.

This is not some minor concern. What we refer to as human trafficking is simply a modern incarnation of slavery. Its victims, often children, are frequently forced into sexual service, domestic servitude, or farm or other commercial labor against their will for years at a time. In the U.S. alone, it’s practitioners have earned billions of dollars using violence, threats or other forms of manipulation on their victims.

The Corpus Christi Caller-Times stood with pro-choice advocates like Wendy Davis in opposition to Texas’ pro-life legislative agenda, and even they can’t see a reason to oppose this bill:

Cornyn’s bill is a step forward, not backward, in advocacy for women. It would encourage law enforcement to pursue the traffickers who turn women and children into unwilling participants in sex trade. It also would use the fines paid by traffickers to establish a $30 million fund to help trafficking victims.

The bill includes the well-known Hyde Amendment, a regular feature of appropriations bills since 1976, which prohibits tax money from being used for abortion. In the Cornyn bill, the Hyde amendment’s application is distinct in that the funding is from fines, not taxes, and the authorization is for five years rather than one. Those distinctions are no reason to oppose the bill in the name of abortion-rights orthodoxy, as Senate Democrats have done. The funding source still is federal and Hyde Amendment approvals are routine.

The LA Times doesn’t like the Hyde Amendment on its best day, but they don’t think Democrats should hold the bill hostage over it: 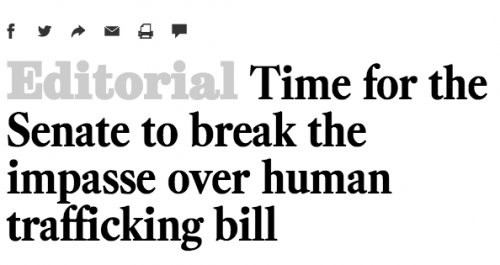 The bill got stopped in its tracks when Senate Democrats belatedly noticed that the victims’ fund would be covered by the restrictions of the Hyde Amendment, which forbids the use of federal money for abortions. That has ignited a nasty fight, with Democrats accusing Republicans of overreaching by refusing abortion services to trafficked girls and women, and Republicans accusing Democrats of trying to undermine a long-established law.

This page has never approved of the Hyde Amendment, and we have no desire to see its restrictions imposed on this bill or any other, for that matter. But the Hyde Amendment has been the law for many years. A fight over whether a fraction of the projected millions of dollars in aid to victims of trafficking and hunters of traffickers can be used on abortion services seems fruitless, and the bill should not be derailed by such a fight.

If the mainstream media can get behind this bill—even in spite of their sometimes strenuous objections to the use of the Hyde Amendment’s provisions preventing federally-funded abortions—why can’t Democrats?

Once you’ve lost the media…

Hoo boy. This one, again.

But, but, but…It’s for the children. Why do you hate children, Amy?

I, for one, heartily support the Caring for Fluffy Puppies and Kittens Act.

I’m beginning to wonder if this ongoing Miller thing isn’t some sociological experiment, lol. Every time I read the words ‘we’ and ‘conservatives’ in the same sentence, I get an eye twitch.

Could it be that the Dims that oppose this legislation are involved in the human trafficking racket? Sure seems like it and they are using the pretext of the abortion issue to cover their tracks. We all know that these very same Dims promote the funding of Planned Parenthood and other pro-abortion groups. It could also be possible that these same pro-abortion groups are also sex traffickers. Without proof of this charge, I am merely speculating here. Stranger things have been proven to be true, in the long run.

Abortion may be about women’s rights, but it is, as is Obamacare, first and foremost about reduced financial and personal liability. The Party’s pro-choice or selective principle calls into question the motives of every Democrat on every issue they have a claim.

That said, women, and men, (and sexually active girls and boys) need to accept responsibility for their actions. They are not legally or morally justified to preserve their welfare through the termination of a wholly innocent human life.

All it means is that the easier political path for Democrats right now is to defend abortion. If public sentiment turns against them, they’ll simply harrumph and support the bill as the now easier path. Who among us could blame the Democrats for expecting a GOP cave on the abortion language? So, oppose the bill citing abortion language and keep it up till GOP caves and removes abortion language. Politics becomes easy when your opponent won’t fight and won’t change.

The slaughter of the unborn is THE Democrat religion. Those of us who were Dems (and especially feminazis) know this takes precedence over all else, including women and (born) children.