Could Rubio be our first hip-hop president? 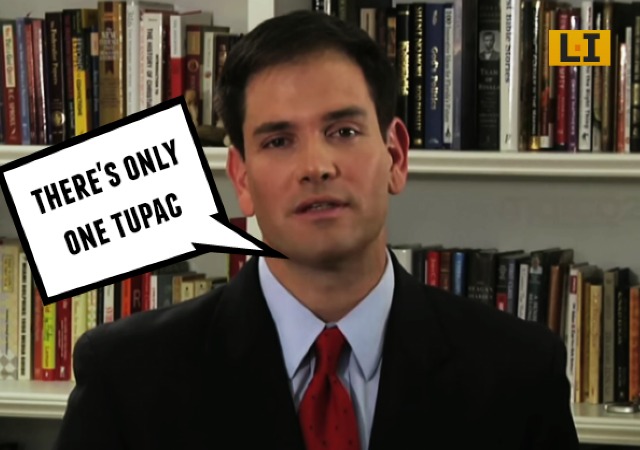 Now that he’s officially running for President, Sen. Rubio’s affinity for rap and hip-hop is back in the spotlight.

Earlier this week, Sen. Rubio was asked if he would be willing to demonstrate his skill of ‘spit rapping lyrics’ on MSNBC’s Morning Joe. Citing the inappropriateness of the lyrics, Rubio declined to share his talent in front of the video cameras.

Sen. Rubio’s love of hip-hop has surfaced occasionally over the past few years.

Though Rubio thinks Jay-Z should educate himself on his hero, Che Guevara:

And then there was the time TMZ caught up with Sen. Rubio as he was leaving Reagan National Airport. They weren’t expecting his answer to their questions about Tupac:

Or when he explained why he prefers Tupac to Biggie:

The press spent the last week pontificating on Rubio’s age and insinuating he’s too young for the Oval Office. The Senator is currently 43. JFK was 43 when he was inaugurated, and Teddy Roosevelt was only 42. But those are inconvenient details I suppose.

Let’s hope that Ted Cruz beats him and all the other GOP primary candidates.

Otherwise, we are totally hosed. We can’t believe ANY of these people – except Cruz.

He is not only the most Reaganesque, he is the most true to his word, sincere, and solid Conservative.

Rubio is a RINO who speaks with a forked tongue, IMHO.

If Cruz doesn’t win, does that mean you’ll sit out the election and serve Hillary the executive branch on a silver platter rather than compromise your purity test?

“He is not only the most Reaganesque, he is the most true to his word, sincere, and solid Conservative.”

Those traits may be compelling for Republican primary voters but they aren’t relevant credentials for Independent voters who have been and always will be the deciding vote in a general election.

Yeah, so we’ve been told, except Romney won independents in 2012 and still had his head handed to him on a silver platter.

Your blanket statement of fact is incorrect, simple as that.

Your blanket statement of fact is incorrect, simple as that.

So who was the deciding vote in 2012? Evangelicals?

Tell me why we should pander to a group who thought they had the ideological luxury of sitting out an critical election and are now living with the consequences of an anti-Christian President and enabler of the present atrocities against Christians in the Middle East?

The non voters like me that refused to vote for the 2nd democrat on the ballot, Romney. Romney, the father of Obama care.

Obambi received a lower vote total than the first time around. The republicans would have won easily if they nominated someone other than Obama light.

McCain, Romney… um, blaming the voter for not voting for your candidate is really, really stupid.

We don’t have the luxury of treating our general election like American Idol or Soccer. My candidate of choice was Ron Paul in 2012. He didn’t win the primary. Romney did.

Then I was confronted with the choice to put a wish washy Big Gov’t conservative in the executive branch that our side MIGHT have leverage or give a bonafide villain from Chicago another four years to destroy this country.

I voted for Romney. Not because I like him but because I recognize that he is just a chess piece in a larger game. Many people who professed to be on our side did not.

My candidate of choice in this coming election isn’t Rubio. It’s Scott Walker or Rand Paul. I don’t do ‘favorite’ candidates because it’s not a variety show.

This isn’t a pissing match over favorite candidates or about Rubio per se.

It’s about what we can expect from people who refuse or don’t know how to play chess and don’t mind if the Left dominates the board for another 4 yrs.

Calling them too stupid to vote right is really, really stupid too.

“We don’t have the luxury of treating our general election like American Idol or Soccer.”

So much BS. My vote or lack thereof has nothing to do with entertainment.

By voting for any shit sandwich the R’s nominate, you guarantee they will continue to nominate shit sandwiches.

If you want my vote you will have to nominate a candidate I can support. If you expect my vote because your dem light candidate is 2.3% less bad than the other democraptic candidate, you’ll be disappointed in the outcome.

“If Cruz doesn’t win, does that mean you’ll sit out the election and serve Hillary the executive branch on a silver platter rather than compromise your purity test?”

No, there are several candidates we would vote for.

Clearly, the “topmen” of the current republican party would prefer billary to Cruz. There is no difference in – climate change/immigration/support Lynch – Bush and billary and little difference in Rubio.

I think it is worse to be a proven liar, and the country is not as conservative as you may think.

There you go again, making stuff up.

I noticed that the only one of the two you said you wouldn’t vote for is Marco Rubio.

Let me clear up your confusion:

I would not vote for Rubio because he lied to us. When campaigning he sounds good, but we know it is meaningless.

I would not vote for Bush because he is not a conservative, no even close. In fact I find little difference in him and billary.

“Could Rubio be our first hip-hop president?”

No. The people he needs to vote for him will not.

Boxers or briefs? If you could be any animal, which would you choose? What are your favorite pizza toppings?

If the Grabien translation is correct (a href=”https://grabien.com/story.php?id=26457″>LINK), is Rubio saying one thing in English, and something different in Spanish?

How dare voters doubt a man who ran as anti-amnesty and then turned pro-amnesty immediately upon election. How dare us!

From The Daily Caller, regarding Rubio’s recent interviews, one in Spanish, another in English. NOTE: The English and Spanish versions of the interviews were conducted by the same interviewer – but in the English version, *** any talk of DACA or immigration is eliminated. ***

“I believe DACA is important,” Rubio told Ramos in the interview, which was posted online and translated by Grabien. “It can’t be terminated from one moment to the next, because there are already people benefiting from it.”

“Well, at some point it is going to have to end, that is to say, it can’t continue being the permanent policy of the United States,” said Rubio, who conducted two interviews with Ramos: one in Spanish and the other in English. Ramos did not ask Rubio about DACA or immigration for the English-language discussion.

“I believe, if I become President, it is going to be possible to achieve immigration reform,” Rubio told Ramos in Spanish.

Did you catch that? Rubio says DACA cannot be terminated “because there are already people benefiting from it.”

Is that Rubio’s formula for cutting government, that you cannot cut programs anyone is benefiting from it?

“Well, at some point it [DACA] is going to have to end, that is to say, it can’t continue being the permanent policy of the United States..”

This is politispeak for “it ain’t goin’ nowhere”.

Rubio, for me, is emerging as a fork-tongued slickster. I believe he and Bush are the one-two candidates hired to save establishment’s money troughs and offices, but I repeat myself.