Better question — should anyone trust Iran? 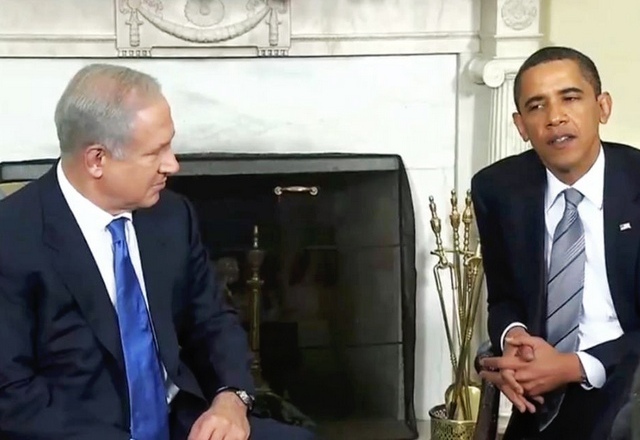 Last week’s “nuke deal” with Iran has drawn criticism both at home and overseas as being less of a “deal” and more of a capitulation to a belligerent enemy of freedom. (I wouldn’t argue with those criticisms one bit.) It has caused many to call into question President Obama’s motives for making such a deal, and forced discussions about what a nuclear Iran would mean for the future of the Middle East as we know it.

Of course, the elephant in the room is Israel, a country whose future depends on the efforts of more powerful allies to block Iran’s path to a nuclear weapon. Not only have we have failed to do so, we have also set Benjamin Netanyahu up as the chief fall guy in the event of a breakdown in negotiations.

CNN’s Jim Acosta interviewed Prime Minister Netanyahu yesterday, and spent a lot of time focusing on the breakdown of the relationship between Israel and the United States.

In the interview, Netanyahu talked a lot about “legitimate differences of opinion,” and emphasized several times that Iran has proven itself to be distrustful. When pressed on the issue of whether or not he personally trusts the President, however, he hedged behind the blast of a necessary truth bomb:

“I trust that the president is doing what he thinks is good for the United States.”

“But as the prime minister of the one and only Jewish state, when I see a country, a terrorist regime committed to our destruction, and not only to our destruction, having a clear path to the bomb, it’s my obligation to speak out as I’m doing now, as I’ll do in any form.”

It was a fair and fundamental question. Acosta had every right to ask it, and I think Netanyahu handled it well. He may not have given a direct answer, but he did send a signal to the Administration and the American people: you have endangered my people, and we’re not going to take it lying down.

The deal is scandalous, and irresponsible; but the fact that it happened at all is a signal to the rest of the world that there could come a day, sooner rather than later, when Israel will have to stand without the support of her once-great ally.

For what it’s worth, I think Netanyahu has taken the hint.

Trust him to act according to the character he has displayed in office.

Yep. After 6+ years, we’ve all seen plenty of the content of his character to make a judgment.

My answer is: “Is this a trick question?”

Bibi should trust only God!

I believe I know where He stands on Israel and I am totally comfortable with His position, not that He needs my approval to dote on the apple of His eye.

1. Israel has many allies.
2. Israel has considerable military power.
3. Few nations in the Middle East want to see a nuclear Iran.

Bibi must do what Bibi must do – the Iranian threat is literally existential – and what he must do is ensure that nations know there is no deal, nor can the Obama admin be trusted to obtain one of any meaning by June, or ever, for that matter.

Bibi will keep speaking out, hope for US congressional help in restoring sanctions against Iran, but mostly he will wait until Obama is out of office.

Bibi’s adminstration is already meeting with Cruz, Walker, Bush, and maybe Paul and Rubio on possible future cooperation. Bank on that.

Iran: “We will accept nothing less than continuing with both our nuclear weapons program and our intercontinental ballistic missile program. You want free parking, we give you that maybe so you can brag about it on Jimmy Kimmel, you imperialistic infidel scum.”

Iran: “Uh, that was a little too eager. F**k that. No free parking, you capitalist pig. You get nothing.”

Obama: “Awwwww! Not fair! Not fair! (looking around room for support).

Iran: “What possible problem could come from Iran having nuclear bombs mounted on the tops of intercontinental missiles, you bootlicking Christian infidel?”

Obama: “That’s true. I know you’d never use them. My gosh, that would be awful of you!”

Iran: “There you go. Now move along, you eater of children and, and… you know, you look vaguely kinda maybe Jewish.”

You left out the fatwa that Obama and Kerry keep referring to.

That nobody’s ever seen.

Why would they do that?

If you’re gonna try to convince the world that Iran is anything less than a violent despotic theocracy, you’re just gonna have to make up a few whoppers, I guess. Easiest lies to tell are those that cannot be checked.

1. They are non-readers. They do not read anything, including the reports written to educate them.

Anyone who would trust Barack or Iran is an idiot.

“It is a good deal even if Iran doesn’t change at all,” Obama said. “Even for somebody who believes, as I suspect Prime Minister Netanyahu believes, that there is no difference between [President Hassan] Rouhani and the supreme leader [Ayatollah Ali Khamenei] and they’re all adamantly anti-West and anti-Israel and perennial liars and cheaters — even if you believed all that, this still would be the right thing to do. It would still be the best option for us to protect ourselves.”

…Obama argues that Iran can be deterred from both its nuclear ambitions and its support of terrorism. He said internal forces eventually will push Iranian leadership to focus more on jobs and the economy. [?!!] Iran still can be the major player in the Middle East without threats to Israel, the West and Sunni Muslims and waging proxy wars, he said.

46 minutes of Obama trying to sell this vaporware deal:

You know, when Iran chants “Death to Americans” and “Death to Israel” they probably don’t really mean deathy death.

It is just a catchy phrase and probably sounds better before translation. Something along the line of “Death to America” or “Death to Israel”. See the difference…..

Maybe this link is better:

Thomas Friedman Op-ed column written as a result of the interview:

The notion that Iran is undeterrable — “it’s simply not the case,” he added.

Iran may change. If it doesn’t, our deterrence capabilities, our military superiority stays in place. …

We’re not relinquishing our capacity to defend ourselves or our allies. In that situation, why wouldn’t we test it?”

Obama is arguing there’s no downside. Also, that he completely believes in the power of deterrence.

The big difference that Obama has with Netanyahu is not over whether Iran wants a bomb or would violate the agreement – Obama is perfectly prepared to concede both of these points might be true.

The big difference is that Netanyahu is not prepared to rely on nuclear deterrence to prevent Iran from using an atomic bomb.

For Iran to have a BOMB is already UNACCEPTABLE.

Caveat: It might be acceptable if Iran would forswear the destruction of Israel.

Pakistan does not have a policy of destroying India. North Korea occasionally threatens vague thing but never promises war on South Korea.

Both of those questions were rhetorical, right?

Does the sun set in the north? Is the pope muslim? Do dogs wear tuxedos to church?

Why exactly are we asking nonsense questions?

“Why exactly are we asking nonsense questions?” Slow news night?

Obama is a Democrat. He is pro-choice or selective on principle. Netanyahu should consider the implications of a pro-choice philosophy to contractual obligations.

My advice to Netanyahu: “speak softly, and carry a big stick”.

Iran will nuke Israel the very moment they can.
They will not even wait for their technicians to clear the launch area.