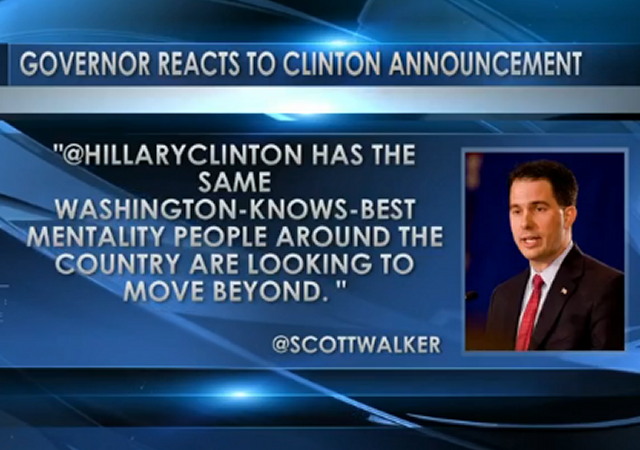 Wisconsin governor Scott Walker has reacted to Hillary Clinton’s unsurprising announcement of her intention to run for president in 2016 by calling her part of the problem.

Millaine Wells of We Are Green Bay News:

The field of Presidential hopefuls is growing. Hillary Clinton joined the race over the weekend and an announcement is expected today from Senator Marco Rubio.

Wisconsin Governor Scott Walker is also expected in the field of GOP candidates. But, he has yet to make it official.

That is not keeping his name out of the political spotlight. Governor Walker took to Twitter to criticize Hillary Clinton…

Governor Scott Walker responded to the Clinton announcement with a flurry of tweets. One says “@HillaryClinton has the same Washington-knows-best mentality people around the country are looking to move beyond”.

Here are a few choice tweets from Walker on the subject:

Americans want leaders from outside of Washington, D.C. with big, bold ideas which is what we're doing at @OurRevival. – SKW

.@HillaryClinton has the same Washington-knows-best mentality people around the country are looking to move beyond. – SKW

As Secretary of State @HillaryClinton was the architect of the failed foreign policy we’re seeing executed by President Obama today. -SKW

Featured image via We Are Green Bay News video.

Hillary’s response: But I am modest! I know how to cover up.

“There you go again Hillary.”

Among HILLary’s worst acts was to join, aid and abet Barack Obama in his destruction of America, Africa and the Middle East.

She is part of Obama’s cronyism, collusion and corruption.

This list of Obama (and HILLary’s) lawlessness is continually updated and should be bookmarked and frequently reviewed by all Americans: http://directorblue.blogspot.com/2011/06/president-barack-obamas-complete-list.html

The Onion has revealed what HILLary was really thinking when she recorded her campaign announcement:
http://www.americanthinker.com/blog/2015/04/the_onion_parodies_hillarys_campaign_announcement.html

“We just can’t trust the American people to make those types of choices. Government has to make those choices for people.”
(Hillary to Rep. Dennis Hastert in 1993 about her healthcare plan)

Hillieary wants to be champion of those she considers chump peons.