Meet Hillary 2016, controlled and contrived, while hidden behind a wall of operatives. 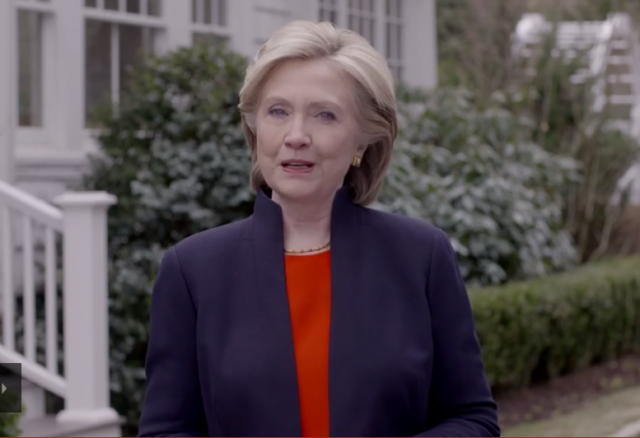 Hillary Clinton’s campaign has been the subject of intensive packaging, down to image consultants trying to figure out how to present Hillary.

It now has been revealed.

I mean, meet John Podesta, long time Clinton operative, confidant and head of the left-wing Center for American Progress, who made the announcement for Hillary:

Hillary Rodham Clinton will seek the presidency for a second time, one of her top advisers said Sunday, ending two years of speculation and coy denials and immediately establishing herself as the likely 2016 Democratic nominee.

The announcement came in emails from John Podesta, Mrs. Clinton’s campaign chairman, to donors and others.

“I wanted to make sure you heard it first from me – it’s official: Hillary’s running for president,” the email reads. It goes on to say that Mrs. Clinton will soon meet with voters in Iowa and will host a formal kickoff event some time next month.

Podesta sends email to Hillary 2008 alumni announcing she is in — first official announcement from the campaign. pic.twitter.com/AsOEw6Z33T

This all makes sense.

It’s out of this world.

No, but seriously, it’s Hillary. Here is her launch video:

About 40 minutes after Podesta, Hillary’s people got around to tweeting from her own account:

I'm running for president. Everyday Americans need a champion, and I want to be that champion. –H https://t.co/w8Hoe1pbtC

I’m hitting the trail to earn your vote. Headed to Iowa. –H http://t.co/Mut4vOMxm0

Hillary’s logo is not impressive or very original:

Mrs. Clinton’s announcement was made by a MAN…!?!?

But he’s a liberal, Dem suporting, CAP supporting man. He has special privileges as a result. And special stature.

Mrs. Clinton’s announcement was made by a MAN…!?!?

Maybe she’s trolling for the vast curmudgeonly “women and children should be seen but not heard” demographic?

Could it be that she couldn’t make the announcement herself because she lost her voice yelling at her staff?

There are some more probable ways she could have lost her voice.

Maybe she just wasn’t up to it.

It could also be that is the way to limit attention to the announcement, because she doesn’t want to be in the news till she won’t get asked questions about the e-mails – but she has to announce, for legal and practical reasons.

Podesta is not just a man!

He’s a world-class criminal and leftist apologist without a scintilla of integrity in his entire corrupt being.

In other words, the perfect face for Hillary! 2016!

The thing that really bummed me out about the video was that Kathleen Willey and Juanita Broaddrick flexing their biceps ended up on the cutting room floor.

Why not Hillary? At this point, what difference does it make?

The ISIS of campaign War Rooms.

Fear not: she’ll be phonying it in, in no time!

Now the media has their signal to start the love affair. Let the sexist claim-games against every GOPer begin!!!

I predict the dirt they have dug up on Jeb Bush is only just the start. Look for more dirt on everyone that helps to reinforce the sexist meme just for starters. Maybe if the media is lucky they will find a jilted past girlfriend for one or more of the GOP candidates who will go on the record to say how mean the guy was. It will just so-called reported. That gives the media cover and signals of the pundits to make the sexist and anti-woman connections. The op-ed pages will be on fire.

The left reached aaaaalllllll the way back to his prep school days to find he was a restless teenager whose lips touched alcohol and who admitted to…wait for it….inhaling!!! Why, he even let his exploding testosterone get the best him. He was reported a BULLY to someone! Everyone who read the Boston Globe’s story I am sure shrieked in horror.

And every GOPer , instead of telling the Hillary campaign to pack sand, will dutifully cower.

Hey it worked for Bill all those years…sorta…except…

Are you ready for John Podesta?

As unofficial Legal Insurrection Presidential Debate Moderator, my first question to candidate Hillary Clinton would be,

“Secretary Clinton, if you are elected president, would you lead by example in addressing our national debt crisis by pledging to charge the American taxpayers no more than $200,000 for every speech you give from the Rose Garden, as well as cap your fees for your SOTU speeches at $1 million?”

So, we go from an empty suit with a teleprompter to a non-show with a spokesman? Wow.

“We need to make the middle class mean something again.”

What is the leftist translation of that vague noble-sounding sentence?

If it even means anything.

The contrived, incompetent, pathological, prematurely-aging, alcoholic thief Hillary Clinton is going to have to come out of hiding some time. And when she does, no hired hack is going to be able to keep her from falling on her face — because of all her other useless talents, that’s one of her best.

She’ll have no reason to “come out of hiding” as the press will be genuflecting and the wimpy GOP guys will live in fear of being called sexist!

Keep it in the family too.

Why not let Chelsea run as VP while we are at it!

I doubt Chelsea Clinton would want to take the big pay cut she’d have to take to accept the VP job. She currently sits on a number of boards, and receives a lot of money for doing nothing. For example, last year she “earned” $299k for her role as a member of the board of directors of Barry Diller’s internet media company. You can understand why Diller would want Chelsea on his board, what with her extensive knowledge and experience in running internet media companies. Chelsea also sits on the board of a ballet company; again, one can understand why she’d be such an asset, what with her extensive background and training in performing ballet.

Poor Chelsea. Must be rough to have to turn down so many opportunities for “public service.” But no doubt she ponders the cruelty of her middle-class existence while strolling around her $10.5 million, 6-1/2 bedroom luxury Manhattan apartment, overlooking Central Park. It’s just so wrong that the system is stacked against struggling young moms like Chelsea; thank goodness she has her mother Hillary to champion her cause!

The imaging, what there was in her announcement: Mao meets Margaret Thatcher. It’s the person you talk to at the retirement home where grandma is going to go.

Grandma Hillary is too old and mean to be doing a normal “whistle stop” campaign. She has underlings for all that nonsense.

This corrupt elderly carpetbagger will use the “I’m digitally hip” front to remold her Clintonesque forensic coverups, deflecting from her 50 shades of Hillarygate. That’s gonna take a lotta LOLZ Cats.

LOLcats are still cheaper than all the industrical-stength spackle and filler she’d require for regular media appearances.

So one question is answered already.

There has been talk of a “Hillary-of-the-people” small-ball rollout featuring Her Imperious Majesty speaking with intimate groups of randomly selected subjects in randomly selected places like Council Bluffs, Iowa – but some have wondered how an entourage of courtiers, handlers, Secret Service, water bearers, native boys with large palm frond fans, advisers, and commodity futures brokers could fit into a small place like a private home and still have room for the two to three dozen reporters assigned to cover Her Supreme Aloofness.

Of course, we now understand one reporter and one camera only will be allowed to take pictures for the first five minutes, then be ushered out as Podesta hands out the copy for the story to the whole contingent.

“What difference does it make where the buck stops?!?!”

“It depends upon what the meaning of the words ‘cherry tree’ is.”

Pirates of the Caribbean:

Pirates of the Coronation:

Hillary 2016 = Crimes so blatant and innumerable, the only hope for avoiding investigation, prosecution and incarceration, is to run for president.

To watch for: every attempt to compel Hillary to testify in email-gate, Benghazi, et al, will be rebuffed as a witch hunt to undermine her candidacy.

That video – all those foreigners. She has no shame about anything, whatsoever.

A carefully crafted propaganda video as transparently fake and affected as Hillary is. There is no denying that she is well aware of the power of images, staging, narrative, perception, etc., on the path to gaining political power. She may be a vile, arrogant, Machiavellian, self-serving crone, but, she is politically astute.

That said, here is nothing in her odious character, limited life experience (all in government) and meager professional accomplishments to recommend her to the position of President. She will run on the novelty of her gender (as Obozo did with respect to his racial composition), pandering to the masses about “income inequality,” all while carefully cultivating a cult of personality managed and finessed by one thousand cronies, handlers, image consultants, etc. The mainstream media, of course, will predictably protect her image and shield her from any criticism or scrutiny, as it has done with Obozo.