And supports 20-week abortion ban, too. 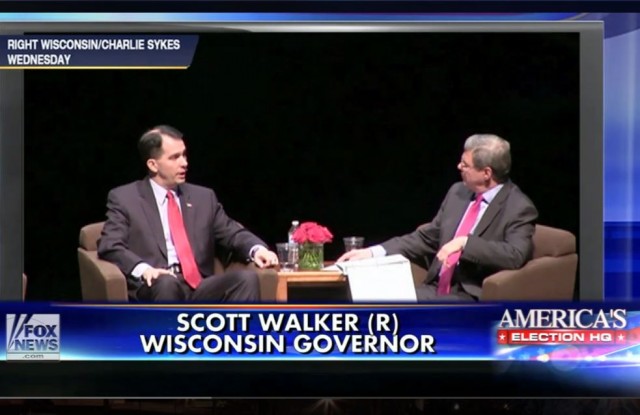 Walker defended the law, stated that Wisconsin had a similar provision embodied in its Constitution, and that the outrage was sparkd by those “chronically looking for ways to be upset about things,” BuzzFeed reported:

Walker said the outrage for the law was coming from people who hadn’t really looked at what the law really is and were just looking for a reason to be upset.
“I just think this is people who are chronically looking for ways to be upset about things instead of really looking what it is. I believe in protecting religious freedoms. It’s inherent in our state’s constitution. Heck, it’s inherent in our U.S. Constitution, and again, Wisconsin, we’ve done it, and we’re stronger for it.”

Asked about what would happen to a baker who did wanting to provide services to a same-sex wedding in the state, Walker didn’t address the scenario, but said Wisconsin’s law strikes “a healthy balance.”

“Again, if you look at the constitution there is both a combination of religious freedoms protecting the constitution and back in the ’80s, long, long ago when I was still a kid, there were also provisions there that would protect against discrimination including a gay or lesbian individual out there,” he said. “So there is a healthy balance of someone can’t be discriminated, say, in the workplace and that — but for someone who has a conscientious objection, based on their religious

Walker also is supporting legislation to ban abortions after 20 weeks:

“I think it’s highly likely,” Walker told conservative talk radio host Charlie Sykes in an interview about the chances of such a bill meeting success in the Wisconsin state legislature.

“I think that’s a very rational position not only for those of us who are pro-life, but I think most people who have a rational view on this issue think those who oppose it are fairly extreme on this one,” Walker added.

The interview was featured on Special Report:

“Asked about what would happen to a baker who did wanting to provide services to a same-sex wedding in the state, Walker didn’t address the scenario”

Shame that he didn’t answer that question.

He DID address the question, you lying moron.

The question involves a matter of law, which is never appropriately dealt with in a sound bite.

Are you planning to lie all over this thread, too? Why do you think the Prof. should facilitate that?

Is lynching permitted on this site? If so, we should start a posse and go after this PoS.

“uhhhhhhh open the yellow pages and hire a DIFFERENT baker.”

Invisible hand and all that.

Retract the uhhhhhh part, that would be the first 5 seconds of Obama’s answer.

People are tired of the Dictocrat Party* and its Obumbum!

*The Diversity Myth, by Peter A. Thiel and David O. Sacks

Ted Cruz’s Campaign Shows the Duplicity of the ‘Multicultural’ Left

Shame the question’s not in any recognizable form of English.

You’re picking on the ignorant again. 🙂

Huh. I wonder what her sexual orientation is…?

That would be par for the Crap Barrack Sh……. network…..

Like NBC faking video of “faulty” products – when NBC is the faultiest?

Walker seemed prepared and comfortable on each question. It might be different if Stephanopoulas was attacking him, but all that comes with time. I imagine he will be ready for thorough follow ups on all this soon, if he isn’t already.

He didn’t directly address what to do with illegals here, but supported having employers verify legal status, after securing the border. And that to become citizens they have to go back home, and get in line. He didn’t say “self deport”, and he said he’d leave it to a future president and congress, what to do with everyone else.

I’m OK with that, but I think he’ll need an answer to “what about the 11 million illegals?” The answer may be that we don’t have to DO anything with them, unless they break laws. But since there is already some flap over that, and e-verify would quickly put many out of work, it is an open issue.

OK, this is for you and pesanteur.

There is a certain “nicety” to effective political speech.

Churchill did not say…or need to say…”We will gut shoot them on the beaches, we will blow out their brains in the hills, we will roast their flesh in the streets”.

He knew that “fight them” was good, and that his audience got his meaning.

For that forum that was an OK answer. But he will be asked specifically about the 11 million. If they don’t get amnesty, what do they get? I don’t see how “leave it for a future president and future congress” is a good answer.

Personally I think we have to give them an alternative status, since we need to ID them. Add in the e-verify and add taxes, so all that are indeed working are ID’d and only the trouble makers are left “in the shadows”. We will probably end up keeping most of the working illegals, but they won’t be voting using my way.

Well, we may be guilty of arguing around the margins, but…

By the time we gain control of the borders AND visa violators AND make eVerify the law of the land with some serious teeth for violations, I don’t see that there will be a problem in a few years, PROVIDED the welfare state is also made inaccessible to these people.

What’s left is a cadre of REAL “dreamers” (not the happy, happy MS13 dreamers), and we can equitably deal with them.

That’s a bit condescending. We’re all quite aware of the need for skilled rhetoric. No one is suggesting he speak in crude or juvenile terms. But this isn’t our father’s America anymore. We shouldn’t — we cannot afford to — accept such generalized and benign language for those behind the preeminent threat to American civic order and life. In any case, it doesn’t meet my standard. I need to hear more direct and compelling language. It’s also politically smart to engage in this kind of language. People are disgusted. The politician who can press on the sore nerve and also assure us that he can offer leadership through this hateful age will carry the day.

I’m with Rags on this. TV in particular is a “cool” medium that rewards those who are calm, low key and charming. It is not a coincidence that liberals rule in TVland while conservatives rule talk radio.

Sorry, his responses are far too mealy and oblique for me. It’s not just “people looking for things to be outraged by”, it’s an entire class of very identifiable radical SJW leftists dedicated to the annihilation of dissent and basic American individual sovereignty. They are in league with a totally wanton leftist media massively contemptuous of traditional journalistic and liberal principles. They are not “people” but militants operating within very powerful bases of influence exploiting the ignorance of those conditioned by lifetimes of leftist indoctrination to anti-American “narratives.” This has been going on for decades but is now reaching socially intolerable levels of division and destructiveness.

Yeah, but considering the response was from a Republican, it wasn’t bad

The Democratic religious or moral tenet of selective exclusion or pro-choice principle, whether it is applied to wholly innocent human life when it is uniquely vulnerable, or selective exclusion of non-trans orientations and behaviors, should the libertines hard. Just as it eviscerated them when they supported progressive involuntary exploitation or redistributive change, and coercion to restrict liberty of select classes of people. Hopefully, people of conscience will not participate in commerce with the abortion industry, and will elect to abort this genocidal enterprise, and mitigate the debasement of human life through policies of diversity and commodity. There should be a separation of Cult and State. The State should not normalize (i.e. support and promote) dysfunctional behaviors, including the Cult’s sacrificial rites.

That said, it is not only a scientific fact, but a self-evident truth, that human life evolves from conception (i.e. fertilization) to a natural, accidental, or premeditated death. The abortion industry in service to the Secular Cult under direction of the Democrat Party has committed an unprecedented violation of human rights.

Well, have the progressives given up on the No Bullying narrative? Probably not, just depends on who they think needs bullying.
If I’m the baker and don’t want to face the lawsuit and publicity, I hire a couple street thugs or some unkempt homeless folks to deliver the cake.

The bullied bakers need to read ‘The Help.’ The answer lies therein.