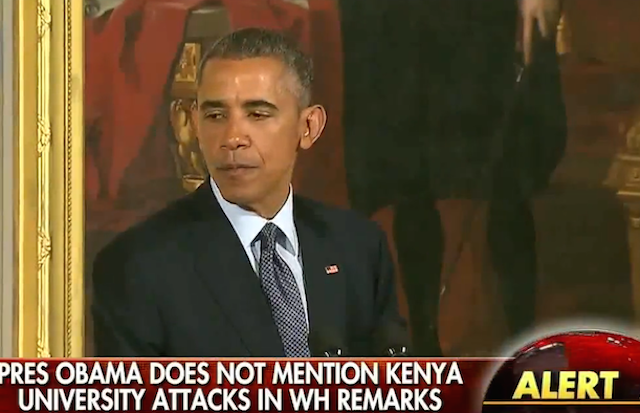 At this point, I’ve pretty much given up on the idea that I’ll be able to make it through a week without somehow being maligned, insulted, or “made to care” about something by the President of the United States. He is who he is, and he’s made it abundantly clear that he’s not going to turn a 180 anytime soon.

Yet I was somehow still shocked when I heard that he had taken a beat during a recent speech to lob an insult at Christians in general for being…un-Christian, or something.

Did I mention this happened during his speech at the White House Easter Prayer Breakfast?

“On Easter, I do reflect on the fact that as a Christian, I am supposed to love,” Obama said. “And I have to say that sometimes when I listen to less-than-loving expressions by Christians, I get concerned.” As the crowd began to murmur, the president backed off, saying, “But that’s a topic for another day.”

“Where there is injustice we defend the oppressed,” Obama said, returning to his prepared remarks. “Where there is disagreement, we treat each other with compassion and respect. Where there are differences, we find strength in our common humanity, knowing that we are all children of God.”

2 parts uncomfortable laughter, 1 part horrified disbelief? That’s what I heard from the crowd.

The recent battle in Indiana over RFRA laws threw that game into full relief. Instead of making the distinction between Christians at large, and those who would choose to not, say, cater a gay wedding, progressives and the media chose to make “Christians” the villain.

Christians are discriminating against you.

Christians are the villain.

You need to worry about the Christians.

Oh, and speaking of Christians—the President didn’t take time to mention the Christians who were brutally slaughtered in Kenya simply for being Christians. I guess that would have brought the room down after his exercise in ignorant bliss.

Note to those that may enter the Oval Office… please remove your shoes… as with Moses … you are on holy ground. Instead of a burning bush, the Prez prefers a burning country.

Rev. Wright’s sermons did have an effect. We have had the chickens come home the roost…. at 1600 Pennsylvania Avenue… with the votes of 2008 and 2012, we have been weighed in the balance and found wanting.

“Where there are differences, we find strength in our common humanity, knowing that we are all children of God.”

Well, THAT is the very LAST thing I’ve heard him say about TEA Party people.

Lots of other things. Never that.

What a lying asshole.

Are we not blessed?

I am so sick of this clown’s rancid dissembling, which he thinks is so clever — his coyly snide smears at Christianity and America masked by the phony and patronizing “admission-against-interest” pose, as if he’s really a Christian and American and really cares and he’s so brave to say all of this. How long can this act go on? It’s such a third-rate act.

You nailed it. Thanks to you, I finally know exactly why this hemorrhoid makes me so disgusted just hearing his voice. That voice represents everything you said, and on a gut level my DNA recognizes it as evil.

Going back to basics: ‘Barack Hussein Obama’ (or whoever he really is) truly was the Manchurian Candidate. He’s a fraud and a traitor — a description equally applicable to the ‘news’ media that shills for him.

More damage to America will be wrought by obama in the next 2 years than any American can dream of.

Obama can speak with a honeyed tongue, but his words are always lies.

This foul being is an abomination upon our government, our nation, our society, and our humanity. The sooner he is cast off and his minions banished, the sooner we can begin to heal.

You assume we CAN heal.

There comes a time when you are too far over the waterfall to paddle the other direction.

In my opinion, we are there…

A better speechwriter than his speechwriters, a better strategist than is strategists, I’m amazed he didn’t turn the water into champagne on the spot.

If he did, it would be champagne that’s already been through the audience members.

Says the Abortionist in Chief who, whether he opposes principled tolerance in favor of selective normalization (e.g. trans-equality), or elective abortion of wholly innocent human lives to be replaced by Dreamers and others, supports selective exclusion or pro-choice as a matter of principle. The cognitive dissonance should be deafening, but the sanctimonious hypocrite rarely if ever misses a step. I guess he doesn’t really believe in shared responsibility, other than during marketing campaigns to hock his latest financial scheme.

I have no words. I really don’t understand how he gets away with this stuff . . . well, I guess he didn’t get away it with here, but he’s a truly contemptible person.

Not very difficult: our completely corrupt media shills for him, and the GOP is busy getting fat and drunk at their country clubs.

But sometimes we get lucky, and bartenders try to poison GOP Squeakers:

That’s doubly disappointing, to see that this comment was not an impromptu remark, but written into his telepromptered speech.

And it was so unnecessary, especially after his speech started off perfectly reasonably, with uncharacteristic references to “salvation” and “resurrection.”

“There but for the grace of God goes God.”

I don’t care what he calls himself; Obama is not a Christian.

More than that – Zero is a God hater.

“when I listen to less-than-loving expressions by Christians, I get concerned.”

When my president beats retreat in Iraq and leaves that void, being told repeatedly the terror that would fill it, I get concerned too. A less than loving response to Obama’s trail of genocides, how hard that must be for poor Barack.

Barry is concerned that we’re not praising him and his mob of radical instigators, for their divinely inspired reconstruction of traditional America. Why were there no palms laid down in his path?

Obama still thinks “reparations would not go far enough”, and apparently has something more radical in mind. What of the oppressed in Ferguson, where he and Sharpton burned the place, protesters made trouble for months, and Obama left the people with home values cut in half, and a threat to dismantle the police department.

As much as I try, as a Christian, to love Obama, I just can’t. That fact is attributable, no doubt, to my being a sinful human being, but it also derives, in no small part, from Obama’s malevolence against Christians and other things I hold dear. He manages to violate every principle important to me and does so with utter arrogance and self-righteousness.

Addendum: A moral question: Is a Christian obliged to love someone who is evil? This question is not meant to be rhetorical.

Walker, kindly explicate the reference you provided. Thank you.

Yes of course; Matthew 5:43 and following to start with.

He’s as Christian as Pontius Pilate.

With a similar attitude and demeanor.

He’s as American as apple strudel.

With a satanic attitude and demeanor.

The msm reporting that O’s remarks brought laughter and applause. ANOTHER LIE

They were reporting what happened in the press pool.

Amazing how shallow that press pool can be.

“Instead of making the distinction between Christians at large, and those who would choose to not, say, cater a gay wedding”

Kind of like making a distinction between Muslims at large and those who would, say, try to blow up a school full of kids? Comments on this website tend to lose that distinction pretty fast…

We all know you’re a moron. You REALLY don’t need to feel obliged to prove it yet again.

Maybe the press will actually gain courage when they realize under King Putt their position is the most precarious. You can’t have a tyranny without a complicit or silenced press. They day they become uncooperative they will be silenced; first amendment or not.

Alas, they (the press) haven’t pulled their collective heads out yet. I fear they may never

Coming fr0m a man who sat for 20 years in the church where Jeremiah Wright (I refuse to refer to him as “Reverend”) called 9/11 “chickens coming home to roost”, and also exclaimed “God damn America!”, this is even for Obama a new low.