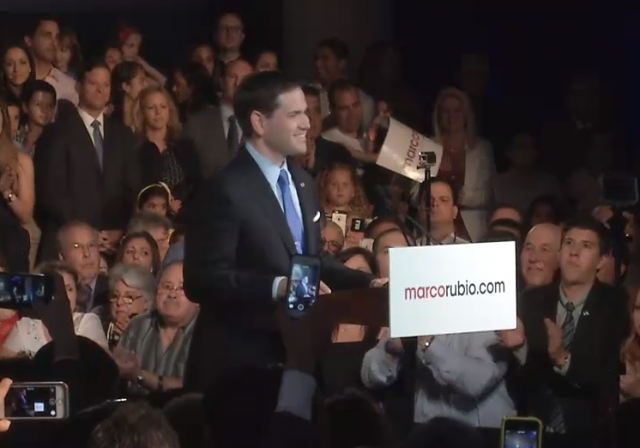 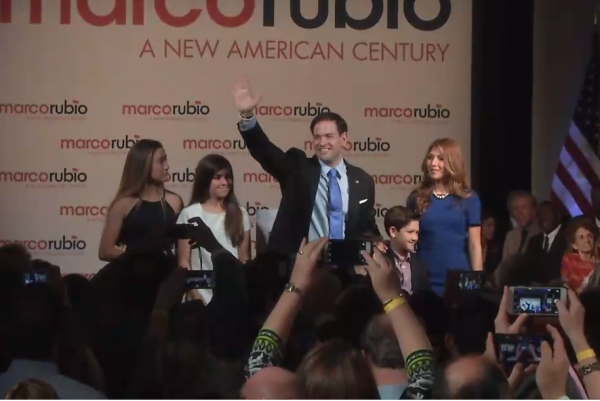 Rubio: too many of our leaders and their ideas are stuck in the 20th century. 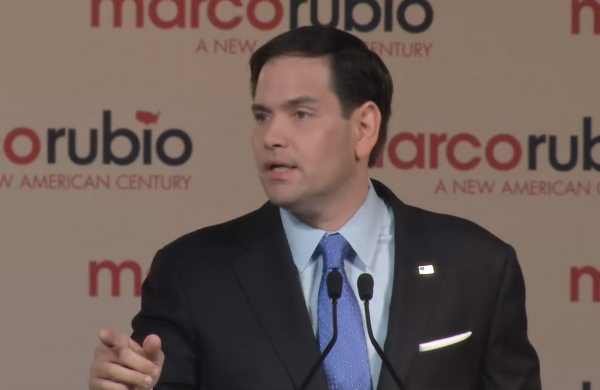 .@marcorubio: “The family, not the government, is the most important institution in our society.”

Rubio: "This election is a generational choice about what kind of country we will be."

Rubio: "yesterday is over" 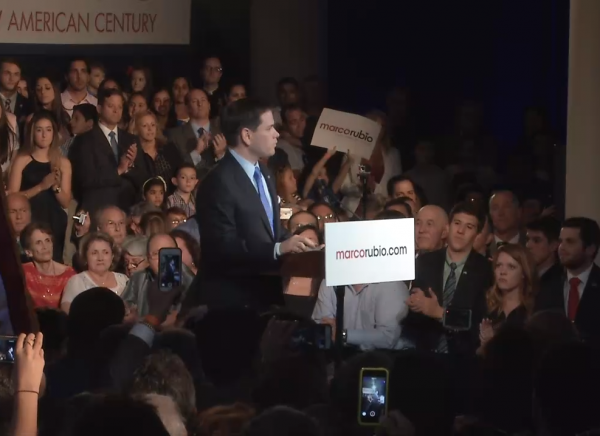 Rubio: 'Just yesterday, a leader from yesterday began a campaign for President by promising to take us back to yesterday.'

"A leader from yesterday." Rubio takes on Clinton. "Yesterday is over and we're never going back."

Not sarcasm: I wish anything moved me as much as Rubio's family story moves him.

Damn. That speech was absolutely incredible. So much American pride. #Rubio2016

I thought the text of @marcorubio's speech was nearly pitch perfect.

Instead of stepping on Rubio, @HillaryClinton announcement gave him the sharp contrast that underscores this speech

Here’s an interview he gave to ABC earlier in the day:

Republican Sen. Marco Rubio is running for president in 2016, the Florida senator told ABC News’ Chief Anchor and “This Week” host George Stephanopoulos in an exclusive interview in West Miami on Monday.

“I think this country’s at a generational moment where it needs to decide not what party it wants in charge but what kind of country are we going to want to be moving forward,” Rubio told Stephanopoulos in an interview at the Florida senator’s home. “I think the 21st century can be the American century, and I believe that I can lead this country in that direction. I can help lead it there from the Senate. I can lead it there as president.”

Too green, too glib, a proven prevaricator, and a sell out. Everything you don’t want in a president in a neat package.

Frankly, looking at his cherubic face makes me sick.

I wonder why Marco thinks he would be better than Cruz or Walker.

(Or is he running to syphon votes away from Cruz for his mentor Jeb Bush?)

So our leaders put us at a disadvantage by taxing, borrowing and regulating like it’s 1999.

And wouldn’t he be happy if Obama made no new regulations that weren’t around in 1999?

What’s he talking about?

He’s like us all to forget the fact that he was played by Chuck Schumer. Don’t.

Drop out. Just drop out. My biggest fear is that our guys will cancel each other out leaving us with Bush.

rubio has many qualities that make him an appealing national candidate. he’s handsome, articulate (in two languages), a potential, historic, first latino prez and he’s young. pitching his youth and ‘newness’ over the other, older, dynastic candidates sounds like a winning strategy. however, in a recent interview with hannity, he expressed his opposition to both marriage equality and marijuana decriminalization which are not the forward-looking positions that are likely to appeal to the younger voters he hopes to woo. it will be an interesting next few months to see how this contradiction shakes out for him.

Well, he may stand up and put on a show, and some will be impressed that he can sing, and dance, and play the tuba; but none of that matters.

Rubio had his Munich Moment, and he bungled it. That matters.

We really don’t need to know any more.

Time will tell if Rubio is really running for POTUS or running interference for Jeb Bush.

Time HAS ALREADY TOLD us Rubio is willing to side with the Amnesty (illegal invasion) likes of Schumer and the rest of the Gang of Eight, when many Americans are out of work and many, many homes are being foreclosed in FL and all over the nation.

If Rubio is running interference for mentor Jeb Bush, that can last no longer than mid-March 2016 – the Florida primary. One or the other goes down that day for having failed to win his own state.

Barring something weird happening, I’ll begrudgingly keep Rubio on my menu until the March 2016 Florida primary, still a good eight months ahead of the election. I urge others to do the same. We can still say ‘no’ to Rubio on election day. No hurry to cut him off.

What has Rubio accomplished besides backing Schumer’s immigration schtick? He’s a back bencher who can give a good speech. If can get Jeb out, that at least would be a good accomplishment.

Here is something where you can talk about the Twenty-First century:

The problem with it, actually is, where somebody has extra income, or the employer reported giving more income than he did. Further problems are deductions, which vary from person to person. You could, of course, just tax what was reported, or tax it at a flat rate.