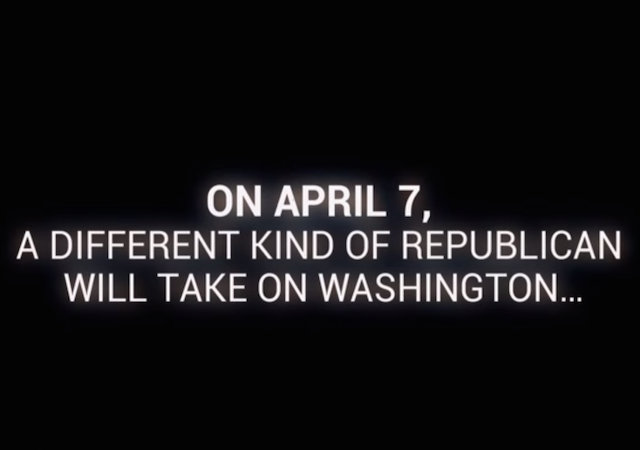 Love him or hate him, you’re about to see a lot more of Rand Paul.

Tomorrow, the Kentucky senator is set to make The Announcement, and he has released a hype video in anticipation of the event. The ad is sponsored by his joint fundraising committee, the website of which already includes presidential campaign finance disclosures.

I guess that’s one way to upstage a hype tweet. No beating around the bush (speaking of Bush…) with this one. Watch:

The announcement is expected to come during Paul’s upcoming speaking event in Louisville. The speech will kick off a multistate tour that will include stops in New Hampshire, Iowa, South Carolina, and Nevada.

Paul will face a unique challenge as he dives into his presidential campaign: how can he effectively court conservatives, without alienating his prepackaged libertarian-minded base?

It is a tricky and delicate balancing act that the senator from Kentucky is trying to pull off: finding a way to make himself more acceptable to conservatives without dampening the enthusiasm of the boisterous, youthful and well-organized grass-roots network that his father, former congressman Ron Paul (R-Tex.), ignited in presidential bids in 2008 and 2012.

“Rand has made it clear that his strategy is to embrace a broader group of Republicans than his dad captured,” said Drew Ivers, Ron Paul’s 2012 Iowa campaign chairman. “Whether he can pull it off has yet to be proven, and he has significant challenges, even though he’s a smart guy and capable.”

“The question is mathematics: How many people will he gain versus how many will he lose, both in terms of numbers and energy?” said Ivers, who says he plans to stay on the sidelines this time around. “I’d prefer if he had a different strategy, reaching out his arms to the center-right and saying ‘join me,’ rather than meeting them in the middle.”

Paul’s recent forays into the worlds of robust national defense and religious freedom will serve as a good start for the fast-rising Republican, but they won’t be enough to put him over the edge.

Something that Paul has that other candidates do not, however, is the ideologically-exotic libertarian-leaning mystique that, if nothing else, will make potential new members of his voting base listen when he speaks. He’ll have much to explain and answer for with regards to his evolving policy stances on defense, for example; but those explanations will give him the opportunity to harness a new message. Candidates like Ted Cruz, who have ridden the hard line from day one, will have less of an opportunity for this kind of rhetorical outreach (but less to answer for in terms of a change of opinion.)

Kentucky is excited for a Rand Paul candidacy, and I expect he’ll field enthusiasm similar to that offered up during Ted Cruz’s presidential announcement. Paul has a difficult and unique path ahead of him, but the uniqueness that his messaging strategy will require could give him the opportunity to distinguish himself from the pack much faster than anyone has anticipated.

I am really torn between Ted Cruz, Rand Paul, and Scott Walker.

Ted Cruz is willing to fight.

Rand Paul really wants to reduce the federal government to its constitutional size.

Scott Walker has actually made good changes in Wisconsin.

It’s no pickle at all… Go with the guy with a proven record!

Oh – and Bobby Jindal has been the medical go-to man for ages, plus recently, he’s been willing to say the un-pc things about islam and the homosexuals.

Why are routine campaign messages being described as ‘hype’ video and ‘hype’ tweets?

Please explain the difference between a hype video or tweet and regular ones. I don’t get it. Are these terms reserved for conservative candidates?

It never seems to improve, does it? Truly, thank you for your valiant efforts to point out the obvious, but I think the target audience is completely oblivious.

Rand Paul has a Rubio problem: Kentucky doesn’t allow you to run for two offices at once, and he is up for reelection next year. The legislature won’t help because Democrats control one side of it. There is a chance the state GOP will change its nominating process for President to caucus or convention to get around it, but it hasn’t done so yet.

So will he give up an easy reelection to become a perennial also-ran like Ron?

The center-right and right of the GOP rejects his foreign policy outright.

Rand himself may position this way or that, but he made literally hundreds of speeches declaring there was no difference between him and his Dad.

That is a limiting factor.

I stand by my assertion that he will never be on a national Republican ticket.

I really like the fact that there are real conservatives running for president against Jeb Bush, etc. There is a chance for all of them because contrary to what the media
reports (read: lies)the voters in flyover country are very
ticked off at Washington and the political games they play.
Most are counting the days until Obama leaves office (656)
and don’t want any socialist/Marxist/communist in government.

We now know the media game, so we won’t be inclined to
believe them when they lead us to the candidate they would like us to vote for; someone they think would lose to Hillary.

Can’t wait to read about and hear their positions and speeches. This is a race I am already very excited about.

The choice is becoming simpler all the time for me. We’re living in the midst of a war, a great national existential agon, for America. There can be no doubt about it anymore. The Left is at war with America and will give no quarter. The institutional GOP has ignored or been unable to admit this brutal truth for too long. In my view, the Libertarian mindset as well simply cannot internalize the truth of this war. I don’t so much dislike Paul as realize he does not — as Libertarians seem unable to — fully understand the nature of the Left and the scope of their intentions.

Ted Cruz does. Moreover, Cruz gives every indication to me he will not conduct himself, his campaign or his presidency with the inherent embarrassment over conservatism and the deference to PCism that has afflicted all institutional republicans since Reagan. Cruz is running into the storm, into conservatism, without apology. I think he’s the man for this time of war.

“Paul will face a unique challenge as he dives into his presidential campaign: how can he effectively court conservatives, without alienating his prepackaged libertarian-minded base?”

Yes, he needs to shore up his foreign policy stuff … I hope he goes with the “carry a big stick, break it over the head of anyone who looks at us sideways and let someone else clean up the mess” version …

What this country needs is a maverick or maybe a severe conservative.

Rand is the last on my list of potential recipients of mah money.