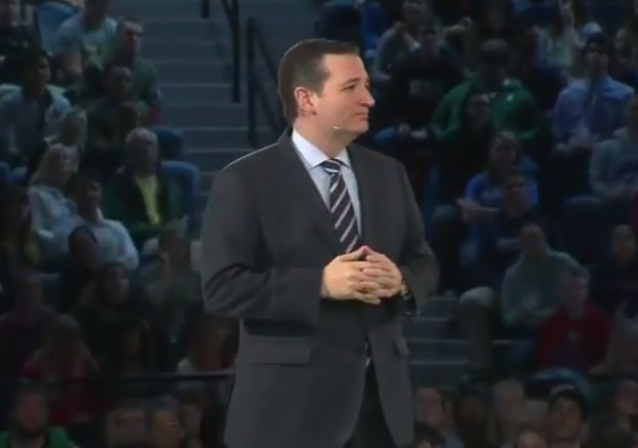 I'm running for President and I hope to earn your support! pic.twitter.com/0UTqaIoytP

Of the many things I learned about Cruz in his 2012 Senatorial bid, one to keep in mind is that the man is nothing if not deliberate. Cruz gave a great speech (he never gives bad speeches), but his campaign launch was littered with several liberty-embellished easter eggs. The result? Some masterfully executed trolling.

Troll 1: Launching his campaign at Liberty University (a Christian university that has a strong anti-BDS stance)

Troll 2: Cruz’s speech was teleprompter free. Cruz does best when he’s speaking off the cuff. He’s also not prone to falling for gotcha questions. Good luck with that one, Media.

Troll 3: Today marks the exact day five years ago that Obamacare was signed into law.

Troll 4: Today marks the anniversary of Patrick Henry’s unforgettable “Give me liberty, or give me death!” speech.

Troll 5: Cruz spoke openly about faith, Christianity, and how Christianity changed his family (Liberty is a Christian university, of course)

Many members of the fourth estate weren’t too impressed though:

If I were launching campaign to win support of majority of American people for my presidency, wouldn't announce at right wing Liberty Univ.

Liberty’s glass ceilings—& those of the religious constituency that Cruz is courting—could complicate his message http://t.co/ZDSBySJYz4

Here Are All the Things Ted Cruz Told You to “Imagine" in His Announcement Speech http://t.co/nHx1ljV9Ri pic.twitter.com/fam22Oubi2

The owners of http://t.co/xihs50x775 are trolling Cruz, which is funny but not important. http://t.co/4NUXIpTCFG pic.twitter.com/27bXoLiu7H

And then the White House:

JOSH EARNEST: "There was a candidate for Pres in 2012 who pledged to repeal the #ACA and that pledge didn't work out too well for him"

The troll force is strong.

It was a great speech. The proggies hated it, of course… but anything that sends them into an incoherent rage just HAS to be good.

Number of people surprised at the messaging from Leftists…Zero.

One thing nobody has noted…

Ted WROTE this speech himself, to the extent it was even “written”.

This material is written on his heart, and he means it.

That’s exactly why the Left and the Estab GOP will go crazy. Cruz is a man whose core convictions come first so his message never has to be fixed for politics. The Constitution is on his side, that, and understanding just what America stands for.

Good. I like the man. I think I prefer Walker right now, and I might even prefer Perry, but it works out to be Cruz I’ll be able to go to the polls with a smile on my face.

Walker has already flipped (for political expediency) on the illegal immigration factor. Just as Rubio has. Cruz had been solid in his stand from day one.

We don’t know WHY Walker flipped.

He’s a good man; I’ll give him the benefit of the doubt until I’m sure what’s going on with that. Or until he pulls a fast one which removes my doubt.

It’s good to keep track of the reporters beclowning themselves over this. Here’s one:

Bizarre to talk about how rights are God-made and not man-made in your speech announcing a POTUS bid? When Constitution was man-made?— Meredith Shiner (@meredithshiner) March 23, 2015

–via Insty, who to his credit did try to set her straight.

Sally Kohn’s tweet: It’s not as if Sally, of Accidental College, doesn’t wear her true colors on her sleeve, too. But, Sally speaks for ½ of ½ of 1/millionth of the population.

Yeah, my reaction reading that was, ‘Right, it’s not like Christians are a majority of Americans or anything.’

No kidding, the last poll I saw stated that 83% of Americans consider themselves Christians.

Sally knows that we need to keep an eye on those Christians. They are beheading people, and throwing gays off rooftops, and burning people, and killing anyone who draws a picture of Jes… wait, what?

The woman who tweeted “My piece on Ted Cruz’s announcement: Good luck with those women voters, Cruz.” linked to her article Ted Cruz Just Laid Out The Most Anti-Woman Agenda Yet

Also, he’s pro-2nd Amendment, and that’s very scary for us. Lots of kids were shot at Sandy Hook, and we like kids, so we need someone who will ban all teh gunz. For the children. Whom we love. More than the constitution.

And government data collection. We’re girls! We don’t care about that-all as much as men do. So he’s basically just lost our vote by bringing it up.

Also, something something foreign policy. Again, we’re just girls! Girls don’t “get” foreign policy like men do; it’s just not our thing! So he’s lost us just by virtue of having mentioned his stance on it. Because confusing!

These are all the ways in which Ted Cruz is “anti-woman”? Seriously? That’s “The Most Anti-Woman Agenda Yet”? What, does she think we’re all chuckleheads?

She’s a far-left hack and her article is hosted at Soros-funded ThinkProgress, so her opinion is irrelevant to sane people.

Cruz chose Liberty College as his opening backdrop. I view the strong emphasis on Christian values as an opening gambit to contrast traditional America that guarantees individual liberty, with cultural Marxist PC America that divides with class warfare intolerance.

The open society, free love, no borders imagination of John Lennon ends in communism/globalism. Their intolerant PC religion is taking over our institutions, as SCOTUS prepares to strike down state marriage amendments, voted for by 60% in many states. Many issues come down to coercion of the leftist feds overruling the will of the people and federalist state powers. (ACA, common core, EPA, open borders, student loans, Ferguson police)

Willmoore Kendall, a noted constitutional theorist, influenced Buckley with his portrayal of America as a political battleground that pitted partisans of the “open society”—liberals with a program of relativism and individualism—against partisans of democratic majoritarianism, who defended the right of the community to preserve its traditional values. But Whittaker Chambers was probably the most important influence on Buckley. Chambers’s autobiography, Witness (1952), dramatized for Buckley the great spiritual conflict that Chambers believed defined the Cold War between the United States and the Soviet Union.

That Judeo-Christian foundation is important, but I’m not sure how it plays to LIVs in PC world. I like his unapologetic tone. It does seem the cold war has become domestic now, with campuses perhaps the front lines.

Ted may have stepped on Huckabee and Santorum a little for the strong Christian vote … good.

His open push for the Christian vote quietly knocked the legs out of any hope Huckabee might have had to jump in. Like you said, this is good.

Apparently, there will be a war on wimminz. Unfortunately for the lunatic feminazis, most women will be joining the Cruz army. I’ve had experience with the female gender and what they want from a man more than anything else is r-e-s-p-e-c-t. Ted respects women no matter what the FSA says.

Even for those conservatives who aren’t Christians, I doubt that the majority of them would discount an otherwise-solid candidate just for supporting Judeo-Christian values himself. It’s only the Democrats who boo God at their conventions.

While I am not religiously a Christian, I am culturally a Christian. This country was founded on Judeo-Christian principles. The dominate religion is Christian. For any culture, their religion is a fundamental part of that culture even if you are not a follower of that religion. We are exposed to Christianity and Judaism throughout our lives even if we do not attend an organized church or synagog.

The fundamental principles of Christianity and Judaism as represented in the 10 commandments and the simple “do onto others” philosophy are the foundations of our culture, whether a given individual is religious or not. And they are an excellent foundations to build a culture upon.

THAT is an elemental part of the Judeo-Christian ethic, and a critical dividing line between it and Islam.

Don’t kid yourselves here. The RINOs did not like the speech either. What Ted Cruz said stands in contrast of what they believe too. The J Street Republicans are scared sh*tless too. I would really love to have seen the look on Karl Rove and Jeb Bush’s faces when Cruz made that comment about securing the borders.

Finally, a happy warrior for the Right. It took long enough. Suck on it, GOPe. Godspeed, Cruz.

I find it very curious that besides the huge closing ovation from the crowd when his wife and children came on stage, the other biggest applause line came when he said, imagine what is would be like if an American President stood up and defended the state of Israel. Ted obviously has strong beliefs and no fear of using plain English to express them. My enthusiasm will be keep in check for the moment. I think that a Walker/Cruz ticket might become a winning combination for conservatives in this country.

Well, it didn’t hurt that the speech was at Liberty’s mandatory Morning Convocation which all students and faculty must attend.

Just to note that if he rented an auditorium in Lynchburg and gave out free tickets, he might not get the same audience enthusiasm as from 10,000 LU students.

Welcome Ted Cruz!!!
Thank God.
We have a horse in the race, and he is already out of the gate and barreling down the track.
At this moment, he is literally the leader.

I wonder if Killary is wetting her granny panties about now? Ted Cruz has shown that he has the cajones to stand up to the Hildabeast.

You are going to aitch-ee-double-hockeystick for that one, Anchovy! LOL!

After his formal announcement, I went immediately to MSNBC to watch heads explode and was not disappointed. They had a ribbon across the bottom quarter of the screen that read: Cruz Announces Candidacy At World’s Largest Christian University!

Cruz/Walker is my dream ticket. I think one of American’s biggest frustrations with Romney was when he allowed Obama to make claims that were factually incorrect without rebutting them. I think Cruz is the person who can respectfully put the Dems on the defensive whether it’s regarding Obama’s lawlessness or Hillary’s bad behavior. Lie-a-watha doesn’t have clean hands either and the Consumer Protection Panel is a big chew toy around her neck, but only if our candidate is prepared with facts and numbers to make it one.

In the meantime, save the Monday morning quarterbacking until next week….. this week we sit back and watch our “betters” shreik, gnash their teeth and rend their garments in despair. These moments are all too rare…. let’s enjoy them!

I heard an excerpt or two from this speech on the CBS Evening News.

Except that I thought Obama mor or less believed it.