Hollywood has not yet spoken re. Hillary 2016

Hollywood has not yet spoken re. Hillary 2016

SNL won’t have the final word. 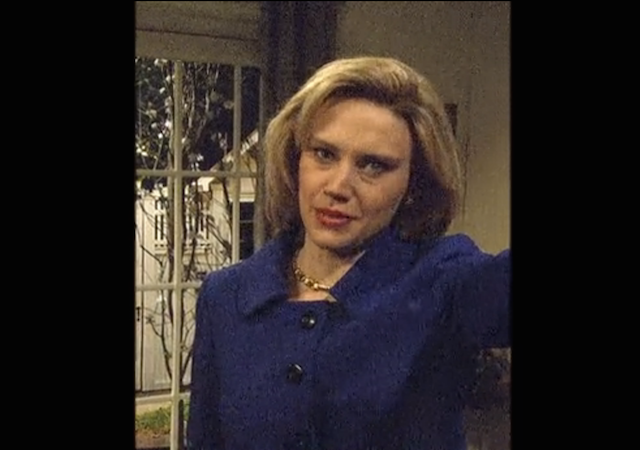 Meaning, I’m definitely a fan of the insultingly hilarious “Candidate Hillary” skits that Saturday Night Live is churning out. This weekend, SNL’s Kate McKinnon donned the pantsuit once more to riff on Hillary’s Big Presidential Announcement©, and it was pretty great. Watch:

Any day I get a bonus reprise of Darrell Hammond as Bill Clinton is a great day, and I’m not ashamed to admit that.

But let’s not see these skits for anything other than what they are—skits. Why? Because they’re not really a sincere attack on Clinton.

I grew up during the Clinton era, which means that I understand every joke that the SNL players are throwing at us. That’s the point. SNL didn’t create this character as a political statement, but as a nostalgic grab for the attention of myself and anyone older than me who remembers the wretched history of the Clinton family, and who cringe-laughs every time that gray-haired doofus pops up in the background to derail his wife’s attempts at sincerity.

These skits are for people who know who the Clintons are, and what they have done—but who still may be willing to laugh at how they’re portrayed on a deliberately irreverent sketch comedy show. They’re not aimed at voters, or undecideds, or big Hillary fans; they’re aimed at people who can turn off the cycle and relax about what they’ve seen on the news.

They’re for me—and maybe you, depending on who you are—and that’s scarily brilliant.

Hollywood has not yet spoken about this candidacy; but when they do, it’s not going to be Kate McKinnon leading the charge. It’ll be a much more polished presentation, and I can’t imagine they will go so far as to turn Hillary Clinton into a clown.

You don’t go from scorned wife to political powerhouse without having a few tricks up your sleeve. Read: Hillary Clinton will bounce back from any parody we throw at her.

Enjoy the skits, or don’t; in the end, it doesn’t really matter. For the time being, be glad that Hollywood is dropping buzzwords about Benghazi and the e-mail sandal out into the ether. Many of their viewers may not understand what’s being referred to, but we can use those words as a trigger later, when we launch planned attacks on Clinton’s corrupt history.

The push for President Clinton 2.0 is coming—but so is a major conservative effort to introduce an entire generation of voters to the Real Hillary Clinton, and that’s sure to be a lot more devastating than a TV skit.

I think NCIS using Fast and Furious as a plot line could indicate the direction Hollywood might go.

“The push for President Clinton 2.0 is coming—but so is a major conservative effort to introduce an entire generation of voters to the Real Hillary Clinton, and that’s sure to be a lot more devastating than a TV skit.”

One can only hope. Bush’s New Tone was a dismal, one-way failure, and a key reason I left the ‘Ican Party in 2007. McCain and Romney both chose to pussyfoot in 2008 and 2012, respectfully, while Obama and the media played hardball and won, giving us the worst president in the nation’s history.

I can’t help but think that an electorate that would have heard Bush defend his actions (and my conservative principles) wouldn’t have turned so sharply against him. I also believe that an electorate informed about who Obama truly is (or at least as best we can determine) would not have ever elected the fraudulant Marxist.

Plus these sketches seem aimed at Millennials. They may be unaware of the Clintons of the 90s, but this may drive them to learn more about them. It sure doesn’t make them seem like people you want to put BACK in the White House.

Hillary will not be the candidate. Watch out for Democrats in a panic.

A real skit would have had Bill’s hand on the ass of that aide as he exited the frame the first time. Then a cutaway from Hillary’s announcement showing the aide lifting her jacket and snapping her thong.

“Why? Because they’re not really a sincere attack on Clinton.”

Yep. If SNL really wanted to mock Clinton they’d have her in a garish orange pant-suit, wearing stroke glasses, cackling out of context, in a room strewn with empty bottles of Chardonnay. And then the skit gets interrupted by a phone call from a Saudi Arabian Sheik who wants to know why he didn’t get the favors he paid for.

Or how ’bout Hillary in bed at 3:00 am being haunted by the ghosts of four dead Americans she abandoned in Benghazi?

There’s so much material to mock Hillary, but SNL can’t seem to find it.

As it was, the skit was lame, and if it wasn’t for the constant references to “Hillary”, I wouldn’t even know who that “comedienne” was impersonating.

50 people watch SNL. SNL targets a certain age demographic and has since 1975. Most TV shows go after the same demographic, because of advertisers – get them young, keep them a lifetime. It is coincidence that millenials fit that yputh demo – so-called baby boomers were SNL’s first audience. But, SNL’s numbers are dismal. It’s like an upsetting MSNBC bit – upsetting till you realize nobody’s watching.

Hollywood will fundraise for Hillary unless and until she tanks or gets shelved in favor of a more leftist liberal. Shows here and there will wrote scripts involving glass ceilings and equal pay. Yawn.

I thought it was funny and they bashed her pretty cleverly. After all that stupid Fey “I can see Russia from my house” card was played over and over and over again until some thought Palin actually said that. Let SNL mock away….

Proof that no one is afraid of the grifters any more.