It’s all about the Benjamins 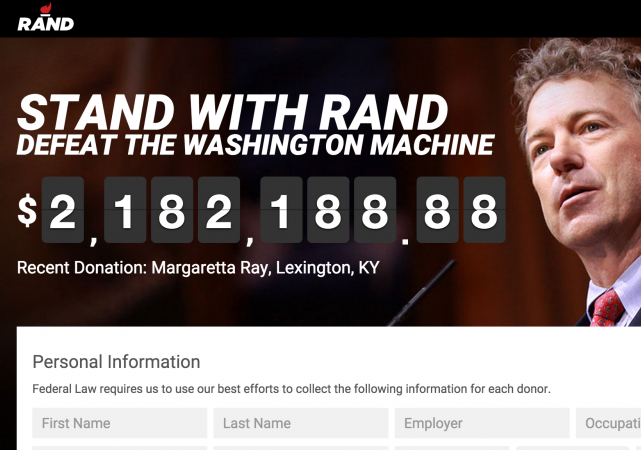 Thus far, the GOP presidential field officially includes three of the Senate’s best. We’re still waiting on the Governors to join the party.

It’s still early, but how are the current candidates fairing on the fundraising front?

The first to hop in the race, Cruz raised $ 4.3 million in his first 9 days of campaigning. A respectable start. If Governor Perry jumps in the race as anticipated, Cruz might lose some of his early fundraising steam. Governor Perry has a well established donor base in the Lone Star State that could suck funds away from Cruz.

According to the Dallas Morning News, although Cruz has the early lead, he’s in for stiff competition as the field continues to expand. By all accounts Governor Bush will be the moneyed man to beat.

Still, Cruz is expected to trail other major candidates in the fund-raising battle. Former Florida Gov. Jeb Bush reportedly had a $100 million fund-raising goal for the quarter that ended March 31, while Cruz would be happy to get $50 million for the entire campaign.

Rand Paul also raised a quick million right out of the gate:

INCREDIBLE! Thanks to supporters like you my campaign for President has now raised over $1,000,000 – entirely ONLINE. pic.twitter.com/kAW6xJOYhq

Which according The Washington Post, was about $24 for every second of his campaign announcement speech. Sen. Paul also accepts Bitcoin donations.

According to Sen. Paul’s campaign website, current donations are at $2.1 million for the Kentucky Senator.

Sen. Rubio will spend the majority of April and May aggressively fundraising. “One of the events will involve billionaire businessman and philanthropist Norman Braman, who is expected to be one of Rubio’s biggest financial backers,” according to Ed O’Keefe at The Washington Post.

Like Sen. Cruz, Sen. Rubio is likely to find himself in a fundraising battle with another home state hopeful, Governor Bush.

And we haven’t even gotten into the PAC fun yet.

Cruz will continue to follow his very successful plan used in Texas, where he started in the race in the south forty (not EVEN on the racetrack), was hugely outspent, and wound up crushing the establishment GOP in Texas.

He and Gov. Walker are my first targets for my cigar money. And my work as a volunteer.

FWIW I donated to the three of them. All great guys, Not gonna make up my mind yet,

I don’t care too much for money. Money can’t buy you love.

Money also only buys a politician until a better offer arrives. We call them whores for good reason.

I hear the DEA gets it free.

Wouldn’t agree that it is all about the Benjamins. The Establishment GOP will be making a costly mistake if they think Jeb Bush is going to win the nomination because of $$$$$$.

The base can’t stand having another Bush run, whether he is at fault for that sentiment or not, it doesn’t change the fact that the bulk of the party is sick of the same old, same old.

I believe these other candidates can upend Bush. Just look at VA-07 for reference. We got rid of entrenched, richly funded, due to be crowned next Speaker…Eric Cantor.

Money can’t buy you love, but a word of support from volunteers here and there can help quite a bit.

That’s why I support Ted Cruz.