Trigger Warnings apparently not enough, after some students complain they are on the video. 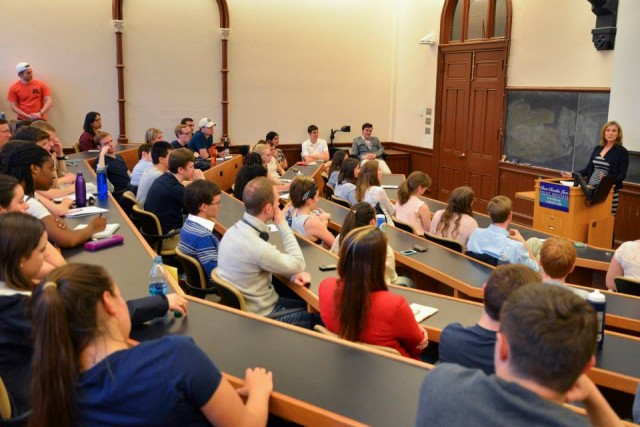 When I wrote my previous LI piece about Christina Hoff Sommers lecture at Georgetown, I hoped that the “trigger warnings” and “safe spaces” were the end to the attempted censorship of Dr. Sommers’ speech.

The Clare Boothe Luce Policy Institute, for which I am the lecture director, sponsored the speech, and recorded it so that others could both hear Dr. Sommers and the people who questioned her.

Unfortunately, I was wrong about the controversy being over. 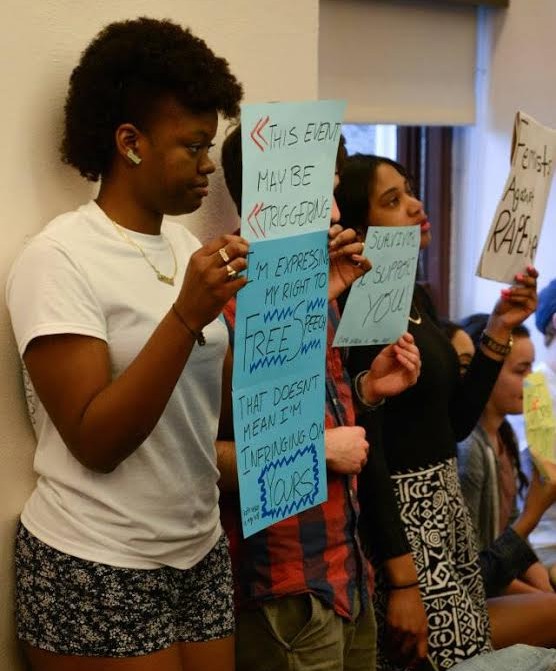 Now, Georgetown University itself is putting pressure on the Georgetown College Republicans to make CBLPI edit its video of the lecture.

In an email, the assistant director for Georgetown’s Center for Student Engagement told the lecture student organizers that if CBLPI is “unwilling or unresponsive to the request, Georgetown will need to step in.”

The University claims that we must edit the video because students who asked questions did not agree to have their faces shown/voices heard:

What was the response from Clare Boothe Luce about the video? I see that is still up online. Please let me know asap as an edited version needs to be released without students who did not give permission to be taped.

If they are unwilling or unresponsive to the request, Georgetown will need to step in. Let me know! 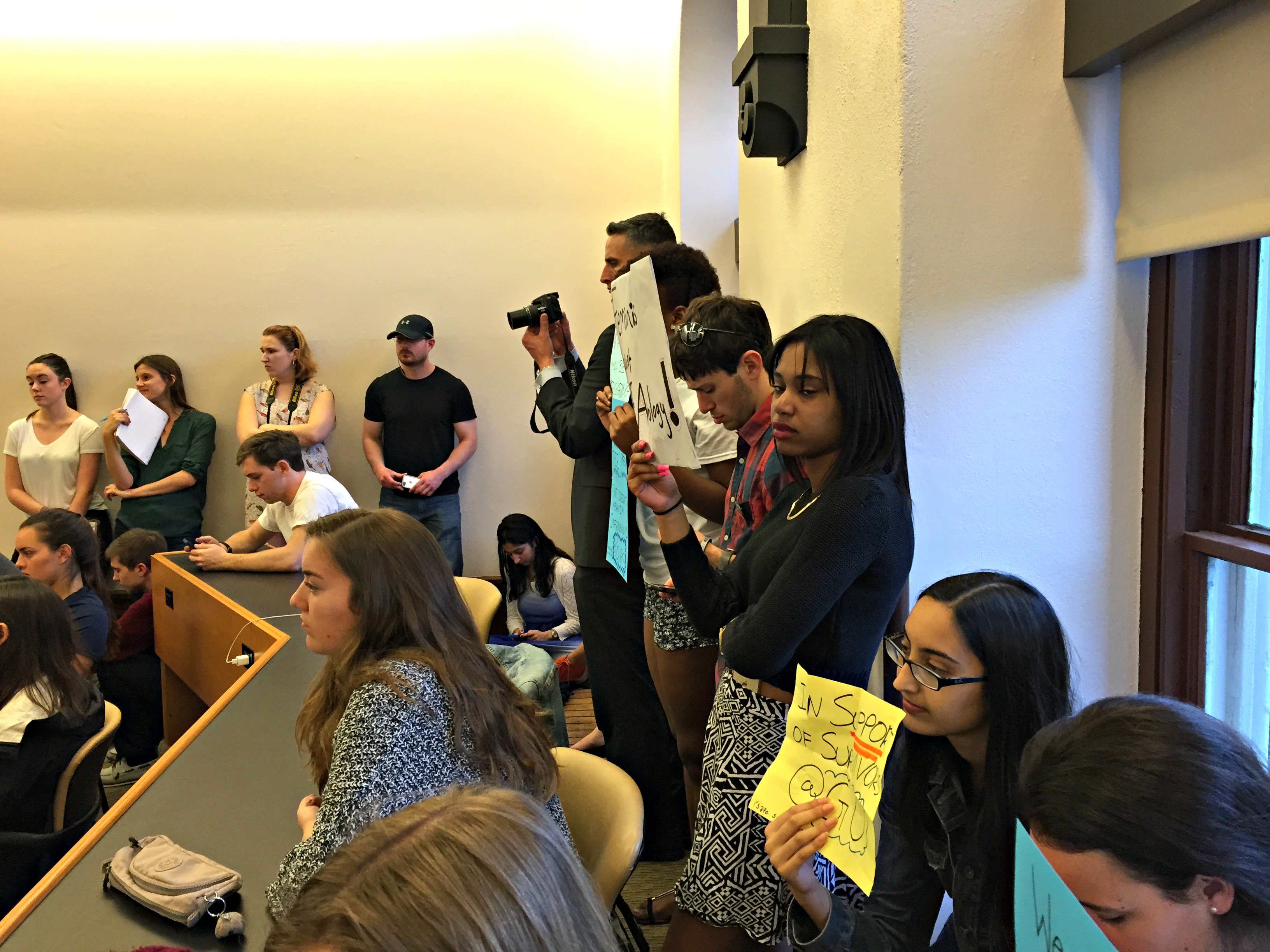 But it stretches credulity that Georgetown and its students would not understand that the lecture was a public event. The video camera was in plain view, and audience members themselves appear to be taking video and photos. It could not shock any student that he or she was on camera.

In addition, the mission of the protestors at the event was clearly to gain attention. Perhaps we are receiving this request because the students were too successful at gaining attention, and are now embarrassed at the reaction to signs like “Trigger Warning – antifeminist.”

I can certainly understand why Georgetown would want us to edit the video. Clearly, it is a public relations nightmare for the University.

The feminist students’ childish behavior toward Dr. Sommers is receiving deserved criticism beyond the Georgetown bubble.

The video in question has over 20,000 views on Youtube and was even showcased on FOX News’ The Kelly File.  In addition, the lecture has received national attention, including coverage from the Daily Caller, National Review Online, and the IJ Review.

Georgetown doesn’t seem to understand is that once a video is uploaded to YouTube, it can’t be edited retroactively. We would have no choice but to take down the video and upload an inaccurate and incomplete edited version of the event.

While many Universities are accustomed to bullying students until they bend to a left wing point of view, a conservative women’s organization named after the courageous Clare Boothe Luce is not impressed or moved by such bullying.

Alert! The madness continues. Georgetown is now demanding edits to video of my lecture.
http://t.co/sFBnsqcTWs

Georgetown,embarrassed by antics of its own students,is trying to close down public coverage of my public lecture.
http://t.co/sFBnsqcTWs

I wonder if Georgetown ever heard of the Streisand Effect?

In case you missed it, here is the full speech:

I would venture to say it depends what that graduate’s definition of “take advantage” is?

Special snowflakes afraid that sunshine may be the best disinfectant? Perhaps they should withdraw from public interaction and attend university online? That way they may never be exposed to discomforting ideas, like freedom of speech.

And just what action might Georgetown take, against a non-student organization?

Amazing! They not only want to shut down the free speech of the opposition, they want to shut off their own when it portrays them in a bad light?

So, Georgetown asked that the video of the Christina Hoff Sommers lecture be raped.
Georgetown has no problem raping free speech.

Oh for gods sake! When the hell do these supposed students find the time to study!?!?!?!?!

How long does it take to learn how to write “trigger alert” or “safe space” on a piece of paper? Or for that matter to learn how to falsely accuse someone of rape and then carry your mattress around cam? For credit!

Did you read those FaceBook insant messages that Emma Sulkowicz and Paul Nungesser wrote to each other, provided in his complaint?

They clearly spent no time studying English. It looks to me that college now crams two months of education into four years.

College is now an extended kindergarten with booze for people who, as Bill Whittle put it, want to burn “triggering” books but are afraid of matches.

Study? Where do you think they are, school?

While it is nice to live in a fairly safe comfortable country sometimes I wonder if we are not too risk aversion obsessed. We have become too soft and self centered.

Take a look at Israel. They live day to day under threat of total annihilation. For the young women of Israel, a trigger warning means they need to pay attention to the trigger on the military rifle they carry even to the beach in their bikini.

You clever, stinky lil’ fish, you.

You Rule 5-ed me in a comment. You good…

Followed the link. I admire your patriotism, sir. I REALLY admire it.

Maybe we should send women into combat. The ladies look hot in uniform and fatigues. Then again, they look great in civilian dress too. Perhaps we can compromise, and ensure that women are armed. America does not yet face an external existential threat.

You know, the main complaint about homeschoolers is that “socialization” can’t happen without public school.

YOU CAN KEEP IT – AND STOP USING MY TAX DOLLARS TO PRODUCE THIS!!!

Here’s a suggestion: blur their faces (or use that bar that blocks their eyes, and thus their ID). Otherwise, they may sue…..and with today’s courts in such leftist-ideology-steeped chaos, they might just win.

Actually, most of us choke back laughter when asked the “socialization” question. And the truthful response, “Duh. That’s why I keep my little darling at home. So that I can socialize her to be a human.”

How dare they? You cannot demand to be heard in a public forum, and then demand privacy rights. This is an inexcusable demand.

Shame on the students, shame on whatever sorry excuse for a professor they are following, and shame on the school for backing them up!

They are not truly worried about the public exposure of themselves as individuals, because none of them are important enough now for anyone to care about, but the exposure of what happened.

Clare Boothe Luce: “Thought has no sex. One either thinks, or one does not!”

How did the youth of today get this way? The more I read and see of these fools, the more I fear for our country’s future.

I would highly recommend the book “Unlearning Liberty,” by Greg Lukianoff. Great discussion of this very topic.

Such youth didn’t create this nonsense. They were led into it, taught it, indoctrinated into it by faculty. We have a crisis in our university system, our whole education system. It’s all infected.

I reject censorship and have made a torrent of the lecture to keep it online. www38.zippyshare(dot)com/v/tudZTtX6/file.html

Aw hell – these college crybabies need to get some Depends if they’re going to crap themselves every time someone “triggers” them, “safe space” or no “safe space.”

If they can’t handle the real world, lock ’em up and throw away the key. These oxygen thieves are more bother than they’re worth. Let someone more deserving take their slot at university ~

Not sure how any editing of the video changes the image for the university or the students. What’s done is done. If they feel shame and worry about reputations, well, good!

He he, I read this piece, then happened to venture over to /r/KotakuInAction/ on reddit. Lo and behold, it had been linked to there. 😛

So, who put a gun to their heads and forced them to attend the meeting, on video? Hm, I’ll bet no one?

IF you go the event, you get videoed. I think we ALL need to see the entire video, sans edits. Are they ashamed of looking stupid or are some of these “students” actually professional protesters? There’s a great article on A Voice for Men that shows how many of the feminist protestors at a Canadian university were really professional activists:

This is a must-read article if you want a better understanding of the student protests on campus. They are being agitated within by certain departments and without by professional activists.

How difficult would it be to edit a Groucho nose and glasses onto the students complaining?

They simply had no reasonable expectation of privacy, especially from the organizers cameras. They were aware cameras were allowed by their own use of them. Their demands are baseless, and any further actions they take would likely place them into the realm of creating a hostile environment based on political beliefs,which I believe is legally actionable.

It’s worse than they think. Due to campus security cams, they were video-ed being video-ed.

The “Whine and Cheese” generation.

the state of being diverse; variety:

in·clu·sive (ĭn-klo͞o′sĭv)
adj.
1. Including the specified extremes or limits as well as the area between them