Whether amazing earned media or staged, conservatives get food poisoning. 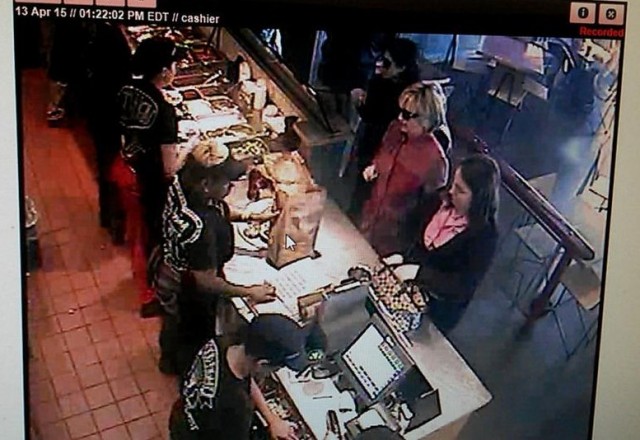 The Hillary Chipotle story is either one of the most amazing unintended earned-media campaign stories ever, or a contrived set up. Regardless, put points in Team Hillary column.

Maggie Haberman at The NY Times broke the story about Hillary’s supposedly secret trip to Chipotle on her Scooby trip to Iowa.

Hillary Rodham Clinton’s presidential campaign is all about “everyday Americans,” she made clear in announcing it on Sunday.

On Monday, she showed how unassuming she herself could be.

Driving to Iowa for her first campaign swing, Mrs. Clinton’s van — with two aides and Secret Service agents aboard — pulled into a Chipotle restaurant for lunch in Maumee, Ohio, a suburb of Toledo.

And no one recognized her.

Maybe it was the dark sunglasses. Or maybe she had a certain je ne sais — qui?

But nobody took notice of the celebrity in front of the counter. Fellow patrons paid her no more attention than a driver would get from a toll taker.

Nor did the restaurant’s staff notice Mrs. Clinton, until this reporter, tipped off that she had dined there, telephoned.

The Chipotle manager, Charles Wright, insisted at first that the tip must have been false.

But he offered to review his security-camera recordings, and quickly reversed himself. There was Mrs. Clinton, in a bright pink shirt, ordering a chicken burrito bowl — and carrying her own tray.

“The thing is, she has these dark sunglasses on,” Mr. Wright said. “She just was another lady.”

Haberman explained in a different column:

Driving to Iowa for her first campaign swing on Monday, Hillary Rodham Clinton stopped for lunch at a Chipotle in Maumee, Ohio, outside Toledo. Tipped that she had been there, I called the manager, Charles Wright, but he insisted I was wrong. He offered to check the security footage, though — and there it was. His employees, he said, were kicking themselves.

It fit so neatly into the Clinton campaign narrative: Hillary is just so unassuming, so humble, she doesn’t even let the folks at Chipotle know she’s there; the Scooby trip is not about Hillary, it’s about everyday people, so not making a big deal about being at Chipotle is consistent with the theme.

The NY Daily news indicates that one customer recognized Hillary, and took pictures of her.

Only one customer seemed to recognize he was in the presence of a newly minted presidential hopeful and snapped some pictures, Wright said.

“He was the only one who really seemed to notice her,” he said.

The media ate it up, and wanted more:

This is @HillaryClinton ordering a chicken burrito bowl (with guac) at Chipotle http://t.co/gJDLFBbx2X pic.twitter.com/6Zwq6pOUFq

It’s the most popular story at USA Today as of this writing: 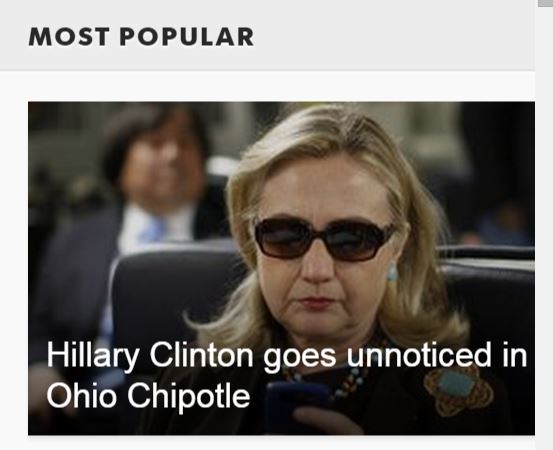 Conservatives didn’t quite know what to do with the story, and were left pretty much gagging:

.@EWErickson says if Mitt Romney had stopped at Chipotle without talking to anyone, media would have attacked him
https://t.co/44tdwcZLfb

Call me suspicious when it comes to the Clintons.

If it was public, even if unintended, then a tip to the NY Times would make sense, though it would take someone with knowledge of the Times’ campaign coverage team to know to contact Haberman.

How is it that a little birdie dropped a dime on the secret event after it took place?

I emailed Haberman that question, but have not received a response:

Maybe it’s all innocent. After all, one customer did notice her and took photos. But if he were the tipster, there’d be no need for security camera images.

I mean, even her Scooby trip in a van is just another spontaneous Hillary Every-Woman decision. Oh, wait:

Scooby Oops: heads up @jmpalmieri @HillaryClinton spontaneously had a Scooby van for her 2000 senate race pic.twitter.com/1dVwFEaawk

Anyone else remember Phil Hartman as Bill Clinton – ‘jogging’ into a MacDonalds for an egg McMuffin and hash rounds?

hartman was awesome.
lionel hutz for the defense your honor…

Perhaps I’m mistaken, but as Hillary is a former first lady, isn’t the Secret Service supposed to accompany her? It’d be difficult to go incognito with that bunch, methinks ~

(An aside: Legislation was changed in the late ’90s, limiting the length of time former presidents & their spouses would have Secret Service protection. Interestingly, Zero signed legislation reversing this in 2013. Probably he knows how much people hate him….)

She and her team had a “not open to press” DINNER for the press, just before her “Scooby” tour began. That’s how they know who at the NYT to contact (probably a direct line).

Totally propaganda. That anyone recognized her is surprising, given how she looks so “incognito”……believe that?! Then there’s an island off the coast of Atlantis that I’d love to sell you……

The only ones buying this [email protected] is the MSM, and their sycophantic followers.

New York Times reporter phoning the restaurant randomly, innocently inquiring?
Not likely. Hillary and Huma get back in van “I don’t think anybody in there noticed, do you?” “Why don’t you call “Pinch”, give them the restaurant’s name and the time and see if there’s anything on the security cameras the campaign can use”

Remember in 2004 when the John Kerry campaign stopped at a Wendy’s in NY?

She’s got to eat at that up-scale eatery, Chipotle where you can easily spend $10 plus for just a burrito lunch! Next she’ll be trying to convince us that it’s 100% authentic Tex-Mex from southern Mexico!

I don’t buy it. Those pants suits of hers—you know, the ones visible from low orbit—would be a dead giveaway.

Btw, is that a reference to the has-been pop singer in the title? Grannie GaGa?

Anyone who would believe this “story” or “tale” would also believe Michelle Obama was in the back kitchen cooking the orders!

It is a wonder she did not steal the tip jar.

What makes you think she didn’t steal the tip jar?????

What with being as this is a classy web site and what with classy posters like Henry and Rags I am going to avoid any commentary on the subliminal message involved in Hillary eating a taco. Nope…. not going there.

Classy? YOU TAKE THAT BACK.

Oh, and THANKS for the mental image. I believe I’ll go pour a couple gallons of bleach into an ear.

Has anyone seen a recent photo of her that was not air brushed? No? So, of course no one recognised her.

That’s got to be the first time she hasn’t flown somewhere in a private jet while lecturing us little people about carbon emissions. Speaking of, I wonder what her volume of “carbon emissions” will be after she eats at Chipotle…

Arranged or not, Hillary sure got a lot of media attention over her little meal. It was a lead story on FOX, and here, and everywhere. Good grief, what other mundane Hillary events will get top billing?

But yeah, if someone else noticed her and took pictures, everyone probably did at that point. But we get the blurry security image and the “normal person” Hillary story.

yeah the secret service just stood outside and allowed this….
more than likely people knew who she was and wanted nothing to do with her or did not want the security hassle.
or she smelled like old tuna.
the more that ignore her the better.

Enough with the Hillary/food shit! You’ve killed a couple of my favorites already! How the F am I ever going to eat tacos or tuna fish again?????

I swear to God, the first MF-er who mentions kielbasa is going down HARD.

Dude, read your last line. You’re worse by accident than they are on purpose.

Well, you didn’t specify Polish kielbasa, so you’re off the hook.

Twitchy was on it yesterday, someone should follow the Scooby Poo Poo van and plant an empty box of Depends and call the MSM.

Does Chipotle have a senior burrito?

So the real scoop is that Hillary and Huma are doing a road trip together in a van? Will Huma and her Muslim Brotherhood family approve? Will The Wiener expose his true … feelings?

Stay tuned, for “As the Hillary Turns”. Now a word from their sponsors .. the Saudis and Chinese. So she takes money from those two, but is in bed with the Sunnis?

“Oh what a tangled web we weave, When first we practise to deceive!”

Future episode: Bill divorces Hillary and seeks asylum on pedophile island … will Hillary force the O’Connors to make her and Huma a LGBTQWERTY (whatever it takes to win) wedding pizza?

Doesn’t Obama own a plantation there?

I can’t believe ANYONE is talking about this. Everybody eats.

If this is newsworthy, it means she is utterly the wrong person to be “for the middle class.” This is bizarre.

She probably ate the entire portion of the heavy, greasy slop they serve (it was free, after all), and she’ll now spend the rest of the week on the toilet.

Hillary Clinton’s gluttony and greed are equal only to Michelle Obama’s. The first two non-First Ladies in American history.

This was newsworthy all day, but not the fact that April 14, 2015 is the 150th anniversary of Abraham Lincoln’s assassination…this is more important to cover.

Sorry Henry! I propose the new name for the van to be The Tuna Taco Transporter.