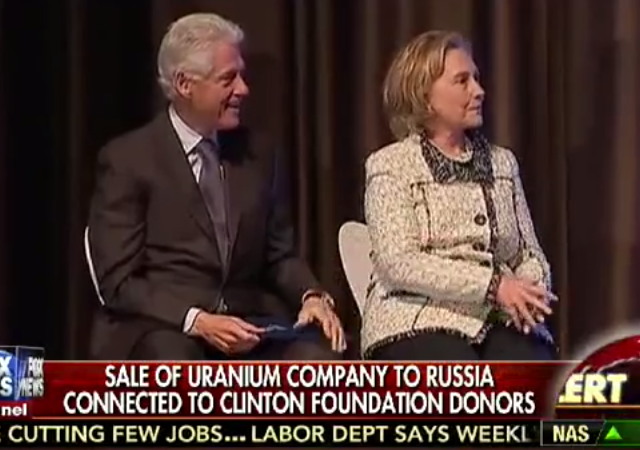 FOX News is airing a special which examines claims made by the new book Clinton Cash.

Special Report host Bret Baier interviews author Peter Schweizer and investigates alleged abuses of power and money by the Clintons from the efforts to rebuild Haiti to the questionable Uranium deal that benefited Russia.

The special premiered last night and airs again today at 5 PM, Sunday at 3 PM and 10 PM.

Baier offered a preview yesterday which you can watch below.

If you don’t have time to watch, John Hayward of Breitbart has written a review:

FOX News Reports on the Tangled Web of Clinton Cash

It’s all pretty overwhelming when put together in one place. The Clinton hatchet men and spin doctors trying to wish this mess out to the cornfield look ridiculous.

All those favorable deals and special waivers given to foreign companies right after they slipped wads of cash to the Clinton Foundation, and tucked insane six-figure speaking fees into Bill and Hillary’s pockets? Why, that was all just an amazing string of coincidences, stretching out over decades, and adding up to over a billion dollars of Clinton loot!

Sure, it’s pure coincidence that disaster-ravaged Haiti’s first gold-mining permits in 50 years just happened to go to an inexperienced mining company that had Hillary’s brother Tony Rodham on its board.

It’s just a roll of the dice, a stroke of random fate, that cell phone company Digicel sucked up lucrative contracts and came to dominate the Haitian market after its billionaire owner wrote a few seven-figure checks to the Clinton Foundation and arranged ridiculously overpaid speaking engagements for Bill Clinton, who just happened to have a commanding position in the Haitian relief effort.

Caught the last 20 mins of it last night. It was pretty awesome and thorough what I saw of it.

Nobody on the left cares. They’ll vote for Hillary regardless.

It is not the hard left you are trying to get. It is the moderate left and the independents that you are aiming for and many of them will care.

I’ve been curious to see who would step up and defend…and the merits (HA!)…the Haitian exploitionssssssss.

I mean, given the Haiti is THE poorest nation in the Hemisphere, and its people THE most in need of real succor…not being MADE suckers by the Oligarchs of the Ozarks.

Black, poor, ravaged by natural disasters and FRENCH by culture…if Clintons will victimize them, who won’t they victimize?

So, down-thumbing trolls, no guts…???

Step right up, and defend the Clintons ON THE MERITS, not via fallacy.

Do what NO Collectivist has even TRIED on TV…!!! Be the first on your block…

well I up-thumbed, but at least the Clintons are equal opportunity exploiters.

The worst part is so many donations went in times or real need, so many suffered while Clinton types can’t figure out how to spend so much wealth, but must keep collecting more. Never let a crisis go to waste, it’s the Alinsky way … black lives don’t matter, except to be used to collect donations. Some of the same in New Orleans with Katrina billions … though Nagin is in prison now.

Collectivists are all about “collections” apparently. How did I miss that … it was right in the name. heh

To the tune of We’re In The Money
(http://tinyurl.com/lfp7bbg) Youtube

We never see a headline
‘Bout Benghazi, today,
And when we see that ISSA,
We can look at that guy and lie, lie, lie.

She’s is a liar
Her pants on fire.
She’s sold us down the river,
So what difference does it make?

Dare I hope that The ‘Toon and sHrillary are going to be brought down by this scandal? Big Ears should go down with them.

This was an excellent production by Bret Baier, but I think it’s just the tip of the iceberg.

The left won’t care – any means to an ends. Independents may prove to be more circumspect.

The thing is, this story broke a little too soon. It will be hard to keep it alive in this media. The Slimes and the Post will give up the ghost soon enough.