Things that make you go, “huh?” 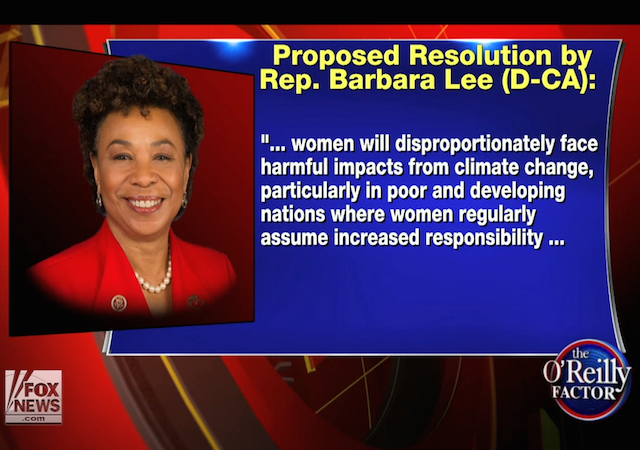 Climate change is turning into the hobgoblin of political posturing, with both sides seemingly incapable of making it through a news cycle without finding some new and exciting way to bring up the impending boiling of our oceans.

Progressives can always be counted on to play connect-the-dots with their favorite token issues, and a new Congressional resolution does just that.

California Democrat Barbara Lee proposed a resolution in the House of Representatives late last month that encourages policymakers to frame their approach to climate change through the lens of gender equality. The resolution claims that women in developing areas could eventually be forced into prostitution in exchange for access to clean water and food for their families.

Correlation vs. causation—it’s a problem for liberals.

This isn’t the first time that Lee has hung her hopes on the attenuated connection between weather and sex work. She filed an identical resolution in 2013. For the sake of being fair and balanced, here’s how PolicyMic explained the resolution when it was first introduced:

According to the Resolution women are already marginalized in many developing countries by “lack of economic freedom, property and inheritance rights, as well as access to financial resources, education, family planning and reproductive heath, and new tools, equipment, and technology …”

This means that women will have less opportunity to adapt and may have to turn to extreme measures, such as sex work or early marriage, to ensure survival for themselves and their families. Especially in countries dealing with high unemployment and financial woes, many women are tricked into sex slavery by persons claiming to offer them decent jobs in other regions.

The resolution also reported that many women in the United States are vulnerable to climate change in different ways. It was noted that Hurricane Katrina displaced over 83% of low income, single mothers.

If Lee is concerned about the ravages of prostitution, she should do much more than settle for a thinkpiece resolution that panders to progressive activists but doesn’t actually get anything done. Perhaps she could encourage her colleagues in the Senate to stop stalling and start supporting Senator Cornyn’s Justice for Victims of Trafficking Act, which would devote manpower, resources, and increased legal protections to the victims of sex trafficking and forced sex work.

This resolution is anchored in the false premise that broadening the discussion about a problem will automatically lead to solving the problem. If Lee believes so fiercely in protecting women from inequality and violence, why doesn’t she create a discussion by filing a piece of legislation that would give her something actionable?

It wouldn’t necessarily be reasonable, or workable, but at least we’d take a step away from the time-wasting strategy of “starting a dialogue” about problems we can actually work to fix.

You can read the full 2013 resolution here.

Or,…
It’s better to keep the cat in the bag so it will not disporportionally face harmful impact from climate change schmos.

But it was self defense. Lol, good one.

Belief in the dangers of burning carbon may cause a rise in sex trafficking, not just because you could do in a way to make people poorer, but because that may be causing China to build more dams in order to increase hydropower. (China has another big reason: air pollution in or near cities, which affects health)

People can be forced to migrate due to natural disasters, social conflicts or ethnic clashes. Others are uprooted in the name of modernization or development projects. In some cases, combinations of
factors act as causal agents, but whatever the cause, the process of human displacement and forced movement destroys the basic livelihood of people, who then become worse off than they were before.

No denying that arrow-straight line of logic.

The man is bent on destroying this nation.

Obama’s “Ego” is so BIG it is going to be the END of him.

Just think of all the prostitution we could eliminate in the Western World if we decriminalized drugs. Most do not take up the oldest profession for fun.

I want to know if Claire Underwood and CWI is behind all this nonsense.

I think the fundamental takeaway from this is narcissism. Feminists want to make everything about themselves.

What makes people poorer is the carbon taxes.
So obama and anyone pushing for new taxes should be prosecuted as pimps.
Put that in your hat and smoke it barbara lee.

I’m thinking if you’re a Lee, you must be dumber than a doornail.

Doornails are dumb, but at least they keep quiet so it’s not so noticeable.