Chris Matthews Goes Off The Rails

Chris Matthews Goes Off The Rails 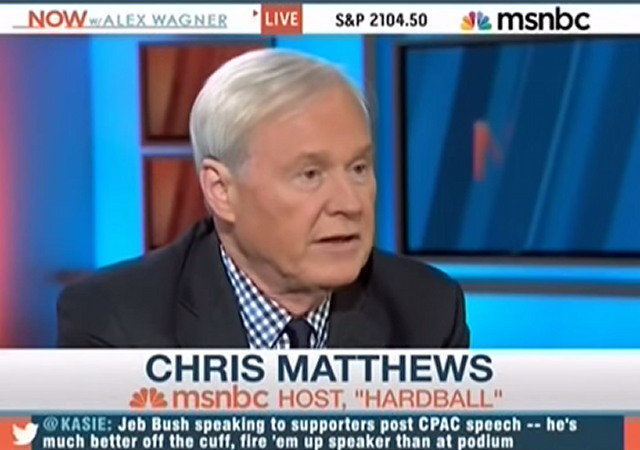 MSNBC’s Chris Matthews has never had much love for conservatives, but he’s been on a roll lately.

Here’s what Matthews had to say about the current GOP field on his show yesterday.

MSNBC Hardball host Chris Matthews loves to slander Republicans as often speaking in code or blowing racial “dog-whistles.” Of course, doing that should open him up to charges of the same when he speaks carelessly. Before I continue, I must add that I don’t in any way think Matthews was making a veiled reference here to Republican Louisiana Gov. Bobby Jindal’s Indian ethnic heritage, but even so, given his network’s political correctness, it seems pretty odd that Matthews feels comfortable comparing the GOP primary field to a Middle Eastern bazaar that’s just missing its “snake charmer.” Here’s the relevant transcript:

CHRIS MATTHEWS: Meanwhile, the Republican field of candidates begins to resemble a Middle Eastern souk, you know, an open market where each candidate calls on customers to buy what he happens to be selling. There’s a libertarian here, an establishment type there, an angry demagogue, an evangelist selling revival. The only thing missing in this bazaar is the snake charmer. I forgot to mention Chris Christie who’s up in New Hampshire selling his New Jersey charm.

Matthews loves to play the race card, but never seems to pay a price for his double standards.

As long as we’re going down this road, here’s a clip via Jonah Goldberg of Matthews (sort of?) defending Rand Paul by slamming all the “piggish money” from neocon defenders of Israel.

Matthews is due for a tinfoil hat fitting any day now.

I wasn’t aware that Matthews was ever on track to begin with.

I can remember Chrissy guest-hosting for Rush.

He kind of saw the rewards of becoming part of the commercial nut crop, I think.

Doddering old Matthews couldn’t be on the right track even if he were tied to it in a one-horse town.

Like the yet-to-be-exorcised Hillary I would have no doubt that Matthews, MSNBC et al are also receiving foreign donations that equate to voices in their head and involuntary head spinning.

Matthews has already generated more interest on this blog site than he ever gets from his 3 regular viewers on MSNBC. Maybe if WE stop paying attention to him he’ll just go away altogether.

I agree. It’s bedrock old news that Matthews is a nutjob. Unless and until he displays new depths of lunacy, we needn’t hold the megaphone for him or MSNBC.

Mr. Matthews has 7 regular viewers on MSNBC if you include the 2 cameramen, the producer, and the studio janitor.

Is he still getting that tingling feeling down his legs? Depends?

Yea, Chris is very, I like the term “Diagnosable”, right up until they let Lawrence O’Donnell on the air then Chris seems calm and reasoned.

Who knows maybe Chris is off the wagon again, watch for the Gin Blossoms to bloom.

It’s fun to read these diatribes but I never and I mean NEVER watch or listen to Matthews or watch that news program.

Matthews needs an industrial-sized enema so that what he’s spewing empties out the correct orifice instead of his mouth.

Meanwhile, the Republican field of candidates begins to resemble … an open market where each candidate calls on customers to buy what he happens to be selling.

The interesting thing is that Matthews seems to think that this is bad.

As we know, the noisy part (at least) of the modern Left has no use for markets. And, more significantly, it has no use for new ideas. A good Leftist party is expected to sell only the same old ideas, and all proper candidates sell only those ideas.

Nor are old ideas ever reconsidered in light of new experience. “Political correctness” stops discussion—discussion which might lead to improvement—before it can even start.

As Darth Vader might have said in a different universe, “Party Discipline is strong in this one …”

Still trying to dislodge that liberal “hairball” — hence he performs on a show of that name HAIRBALL!

“Mental wounds not heeeeeaaaling!
Driving me insaaaaane!
I’m going off the rails on the Chrissy Train!”

With apologies to Ozzy Osbourne, of course.