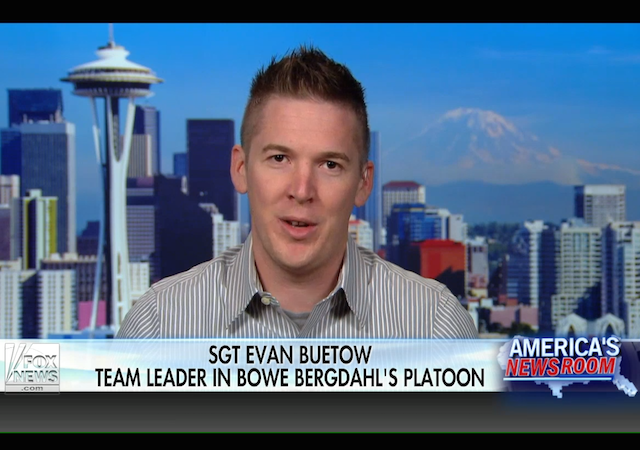 The drama surrounding the official prisoner swap in exchange for Sgt. Bowe Bergdahl has left a lot of Americans wondering just what happened in the days leading up to Bergdahl’s going AWOL and eventual capture by the Taliban back in 2009.

Sgt. Bergdahl is now on trial on counts for desertion and misbehavior before the enemy; if convicted, he could spend the rest of his life in prison. His attorneys, however, aren’t prepared to go down without a fight.

Defense counsel is planning to argue that Bergdahl couldn’t be a deserter because it was never his intention to desert. Instead, they say Bergdahl simply wanted to leave and go to the closest forward operating base to lodge a complaint against his unit.

This isn’t the first time Buetow has spoken out in defense of his men. Back in February, he and fellow platoon member Cody Full penned an op-ed explaining what was happening on the ground the day that Bergdahl walked away:

“On June 30, 2009, in Mest Malak, Afghanistan, Bowe Bergdahl left his unit and deserted the U.S. Army,” the two wrote in a USA Today op-ed. “We know he deserted because we were there when he did it.”

They laid out several examples of where they found Sgt. Bergdahl’s statements disingenuous, including his claims of falling behind on a patrol and walking off base without his weapon.

“No one walks off an OP in Afghanistan unaccompanied for any reason,” they wrote. “And no one goes anywhere without his weapons. Reports that Bowe had often previously left the base alone are inaccurate.”
…
The two soldiers said in the op-ed that the evidence is clear and irrefutable that Sgt. Bergdahl is guilty.

“We are confident that the overdue report from political and military leaders on Bergdahl’s actions, sitting pin a general’s desk since October, comes to the same conclusion,” they wrote. “It has to because the facts are clear. Whatever the reason is for the late report and confused reporting about whether Bergdahl is set to be charged with desertion, justice is being denied to those of us who were abandoned by a fellow soldier.”

Right now, conservatives should be working hard to keep this story in the news. This country exchanged 5 dangerous, al-Qaeda-linked terrorists in exchange for Bergdahl’s freedom; his decision to walk away from his unit for any reason is much more serious than the Obama Administration would like to admit.

I think that claim that he intended to hike off to headquarters is new – I think he wanted to leave his unit and stay in Afghanistan for awhile.

I think he did not intend to defect to the Taliban, and he probably was tricked. He probably let many Afghan soldiers know he was interested in leaving.

You think he intended to just wander off and stay in Afghanistan?

Guess what genius – THAT IS DESERTION. Military personnel don’t get to just wander off if they don’t feel like being there any more.

Yes, it is desertion, but it isn’t defection. And this should affect the decision as to what is done to him. He suffered quite a lot as a prisoner of the Taliban. His desertion was it’s own punishment.

The closest charge to desertion is ‘Misbehavior in the face of the enemy” which is a catch all.

Desertion could get him 5 years, Misbehavior could get him life, since it’s been already let out that the current equivalent of a firing squad is off the table.

dang it:
That first ‘desertion’ should’ve been ‘defection’.

Kind of makes one wonder how much intel that the Taliban got from him.

All of this has been clear to anyone who ever served, doubly so to those who served in a hostile fire zone. The fact that Obama believed that trading this poltroon for five senior Islamic Supremacists is yet another slap in the face of the military, and the most egregious insult to date. Add to that the level of naivety necessary to believe that these terrorists would return to the Middle East and actually refrain from working for the return of the Caliphate and the death of Western civilization is truly mind boggling … provided Obama really believed that in the first place, or even that it might matter.

And then there are the six honorably-serving soldiers that died looking for Bergdahl. A damned good case can be made that this elevates the Article 85 charge to the point where the death penalty is warranted. I’m quite certain that a large number of my fellow career NCO’s would agree with this level of punishment.

The truth is Obama has absolutely no comprehension of military honor or what motivates the military – one of the many reasons why he has the lowest approval ratings of a President by the military in recorded history.

Less than 15% of the military approves of Obama.

The worst part is, this situation was completely salvageable, even the terrible deal. As usual, the problem was Obama and his narcissism and stupidity.

The PROPER angle to approach this would have been to appear reluctant and apologetic about the deal. Tell the military that it was not a good deal, that serious questions about Bergdahl had been raised, and that he was potentially a deserter. However, he was still one of our own, and we needed to bring him back for a full investigation and to face OUR judgement, not the judgement of Taliban terrorists. As soon as he was back, do your full investigation, and prosecute him accordingly.

Instead, in typical Obama narcissism, stupidity, and tone-deafness, he made a big deal about how awesome he was for bringing him back, put on his absolutely shameful performance with the parents in the Rose Garden, and tried to bald faced lie to the faces of the American People about how he served with ‘honor and distinction’.

What a freaking joke this clown in the Oval Office is.

I think it was cynicism on the part of Obama that motivated him to get Bergdahl out, or get him out at almost any cost. Almost, almost.

The cynicism was that Obama didn’t want to leave any American behind who might be characterized as a POW, because if he did the war would not truly be over, and he wanted it to be over. So he’d go pretty far to get him out.

American civilians, who never were in the military, they don’t matter. They are just like American prisoners anywhere, and they don’t cause us to go to war or dtay in a war..

They lied to themselves – about whether were really worth anything, about whether they would be restrained and about who was holding Bergdahl.

About whether were really worth anything: The Administration managed to decide that high ranking Taliban were less important to hold than low ranking foot soldiers – because low ranking foot soldiers could go back into combat, or what passes for combat with the Taliban, but high ranking people were just administrators, far from the scene of combat, would not personally kill any Americans, and were quite fungible.

That’s not my thinking – that the Administration’s rationalizations, which they uttered.

And also, it only concerned Obama if they returned to the fight while American soldiers were still in Afghanistan, and he was planning on – it’s now been partially reversed –
but he was planning for all combat operations to be over in a year.

About whether they would be restrained: They were supposed to stay in Qatar, which maybe they are doing – and prevented from pro-Taliban activity by the government of Qatar, which the administration lied to itself and others that the government of Qatar had promised to do, which it made pretty clear pretty soon it had no intention of doing, lest there be some misunderstanding among the terrorist groups it supported.

Qatar is a big supporter of terrorism – but it also has an important U.S. military base. Maybe some other president might say to them: You want to be on our side? There are some conditions attached. But not Obama. This is utter craziness.

And about who was holding Bergdahl:

It wasn’t the Taliban. It was the Haqqani network. And Bergdahl was in Pakistan. Now these two groups are supposed to be separate and even enemies of each other. The Administration never pondered the intelligence implications of the Haqqani network freeing someone in exchange for people who should be of interest not to them, but to the Taliban.

Of course what it means is that they are one organization, and both of them controlled by Pakistan’s rogue military intelligence agency, the ISI, or part of it.

people keep failing to mention either charge could be death penalty.

misbehavior before enemy (ucmj article 99) is actually a worse offense than desertion (ucmj article 85) and INCLUDES the lessor offense article 85.
99 does not need time of war for death penalty either.
here’s how I see it ending.
guilty of article 85 desertion, time in captivity counted as time served, the money that was accrued during captivity taken back and dishonorable discharge.

sadly they won’t execute him
http://usmilitary.about.com/library/milinfo/mcm/bl99.htm

Only the misbehavior charge could – but won’t – get the big one at this time. Death for desertion only applies during ‘war’ and that could be successfully argued as needing a declaration by congress of such.

You musing of his eventual “punishment’ though is pretty close to mine.

On conviction, a reduction in rank to PVT (E-1) & forfeiture of all pay and allowances. For him that’s basically meaningless if he gets no prison time and is discharged.
I don’t know if they’ll give him a Dishonorable, or simply an Bad Conduct discharge though.

Unfortunately, I think he’s going to get that back pay. As I read USC 857, the loss of pay etc. only takes effect after a conviction. Prior pay is not mentioned.

Bergdahl has written about the horrible treatment he received at the hands of his captors, as if that excuses his desertion. I wonder, having seen them up close and personal, if he and his father still think that Islamism is so great and that everything about America stinks on ice.

It’s more like that six soldiers died during the period of time, when one of their missions was looking for Bergdahl, or trying to free him, and it could be argued maybe that their missions were extended because of that. They were only actively looking for him before they knew he was a prisoner.

It could be argued either way by those of us who weren’t there.
Those that were there however, state that that was the case.
I will defer to their views on the matter.