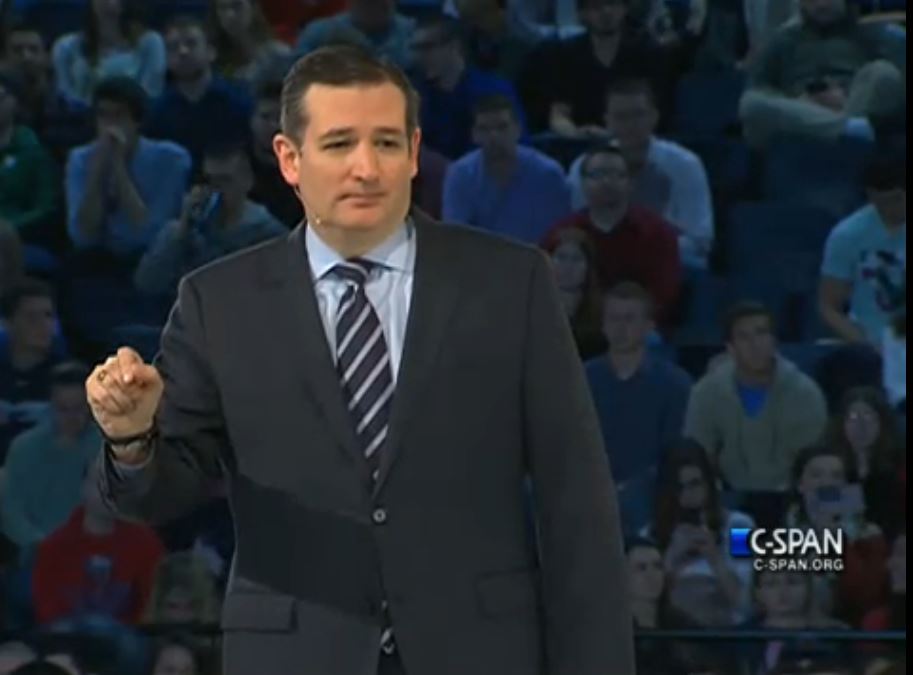 Ted Cruz launched his presidential campaign on Monday with a fantastic speech at Liberty University, and his campaign raised $1 million in just over 24 hours. Within three days of his official announcement, Cruz’s campaign had raised $2 million.  The Washington Post reports:

Sen. Ted Cruz’s presidential campaign had a goal after it officially launched Monday: raise $1 million in a week.

Turns out it only took a few hours.

The Texas Republican’s campaign says it met its fundraising goal at 2:30 a.m. Tuesday — just a little more than 24 hours after he announced via Twitter that he would be running for president. Cruz made a formal announcement Monday morning at Liberty University in Lynchburg, Va.

As of Thursday night the campaign has raised $2 million, about $500,000 of which came from large-money bundlers. The rest came from online donations.

This is quite remarkable given that the donations are pouring in from average Americans who respond to Cruz’s message of adherence to the Constitution, a limited federal government, a strong economy, substantial tax and other needed reforms, and a coherent foreign policy that foregrounds America’s interests.   He touches on each of these points in his first full-length campaign ad:

His appeal to the grassroots is evident in his ability to fund raise so effectively online; the Cruz campaign hopes to raise $40 million to $50 million by next March.

By contrast, Jeb Bush is reportedly busy with private fund-raisers and meet-and-greets, raising over $1 million in a single day.  From The New York Times:

Although not yet an official presidential candidate, Mr. Bush has had at least seven private fund-raisers and meet-and-greets in the Washington area, raising more than $1.3 million for his political action committee in a single day last month, and he has scheduled another one in April.

The fact that Bush has not yet announced his candidacy and is building his war chest at this rate is unsurprising given his support from the GOP establishment and its deep-pocketed donors, but it does suggest that Cruz has an uphill battle in the fund-raising arena and will need the ongoing financial support of the grassroots.

That is a fine commercial. Very nicely done.

It will be interested to see who his big donors are. Or, more directly, who will be jerking his strings.

Lest anyone think I am anti-Cruz, I am not. I just keep in mind that he is – first and foremost – a politician.

I am sorry to have say this to my fellow Tea Party friends, whose hopes and dreams for a better future have been raised so high with the recently presidential announcement by Sen Ted Cruz, but this guy is playing me and you for suckers. When you stop and consider Cruz’s excellent legal background and experience, for this shyster to suggest that just because he is a foreign-born person of a US citizen-parent, who are naturalized at birth, with no need of any further naturalization procedures at a later time, somehow makes him an Art. II, §I, Cl. 5 natural born Citizen, should shock the conscience of every honest red-blooded American. Please save your money.This guy is going to get run out of town by his own petard long before the primary election.

If Cruz is eligible according to Professor Jacobson and Mark Levin, he’s eligible.

Naturalization Act of 1790
“And the children of citizens of the United States that may be born beyond Sea, or out of the limits of the United States, shall be considered as natural born Citizens: Provided, that the right of citizenship shall not descend to persons whose fathers have never been resident in the United States: Provided also, that no person heretofore proscribed by any States, shall be admitted a citizen as aforesaid, except by an Act of the Legislature of the State in which such person was proscribed.”

Ilya Shapiro, who is no Constitutional Law lightweight, also agrees that there’s no problem with Cruz’s eligibility.

Then don’t, and spare us any more OCD “natural citizen” crackpottery.

I see that you’re all over this “Birther” issue, Mr. Farrar, all over the place. You seem to be extremely invested in pushing your narrative. You’re still wrong, but I admire your industriousness.

I’m getting a whiff of a Ron/Rand Paul supporter from Mr. Farrar.

And who’s going to run him out of town? Who’s going to take this to court with standing and win, when the State Department says he’s a natural born citizen? It’s like with the Logan Act – no one seems able to find a case where someone born under his circumstances, or John McCain’s, or circumstances once suspected but certainly never proved about Obama, was barred from running for President or treated as anything other than a natural citizen for two *centuries*. Which is a long time, you may note. Even if Cruz was in the wrong, who has the right to cast the first stone here? Isn’t your “run out of town” talk quite an exaggeration, then?

What? We only rate a JV team troll? Aw come on… how insulting. I bet they send the varsity team trolls over to Powerline blog.

Mr Cruz is still 498 million short according to one poster elsewhere. All Jeb, or any other Rino who can be more easily supported by Wall Street and the Chamber of Commerce, has to do is post resepectable second or third place finishes in South Carolina and the like, but have enough cash to wage vigorous primary war in Florida where the media tab will likely run 100 million. Five and ten dollar donors are not likely to push Cruz over the finish line there and its not likely Cruz will get a whle host of Saudi or Palestinian refugee camp donors like one other previous presidential candidate allegedly did

Cruz got a big boost from his opening speech. 50 million traditional Americans giving $20 to $1000 each sounds reasonable, that’s only one in six.

It hasn’t worked out that way in the past, but who knows what the right message might inspire. It really is “us against them”, them being big donors behind closed doors, though “them” has to be courted to some degree I suppose.

A neighbor farmer here had always voted Democrat but voted for Rauner for governor, as downstate IL overwhelmingly voted R for gov’, (but Durbin still won easily). With Obama leading us over a cliff, and Hillary’s dark side being exposed, it seems feasible some of the Catholic or Jewish vote that has oddly belonged to the Democrat/commie Mob, might flip to Cruz or Walker.

It’s amazing how Dem’s have maintained such party loyalty as they veered left … Mostly by using hate propaganda I think, but the Gaystapo type crap is getting old.

Good ad. It seemed he spoke more personally, less of the strained drama he often uses. We that read this stuff all the time can appreciate the drama, but a rational neighbor type tone works better for the LIV. (the green lipstick fruit loop nuts only work for Obama. ha) Cruz casually walking and talking with normal folks worked well in this ad.

“50 million traditional Americans giving $20 to $1000 each sounds reasonable, that’s only one in six.”

I doubt that kids or adults who don’t vote contributed much, so a ratio of one in four or so is likely more accurate. For this early in Cruz’s campaign, that’s a very, very encouraging sign. Most will donate again. And again.

Also, while not strictly analogous, Cruz won his Senate seat in a real David and Goliath fashion. He was out-spent several multiples, if I recall correctly.

#DefundTheGOP – contribute directly to the candidates you want to see succeed.

That was my game plan last year for the mid-terms, and will be again this year and in 2016.

Yeah, Hillary Clinton has a chance at becoming president — that is if Iran drops a ‘memory bomb’ on the entire United States and no one remembers history prior to 2015.