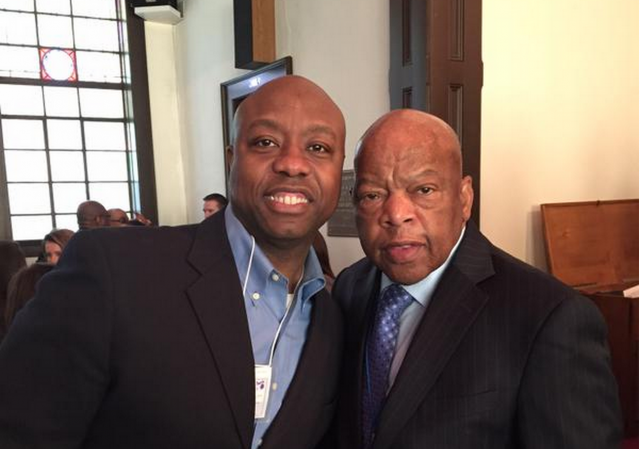 On March 21, more than 3,000 marchers joined Dr. King on a march to Montgomery. By the time the Dr. King reached Montgomery, approximately 25,000 marchers accompanied him. Only a few months later, President Johnson signed the Voting Rights Act of 1965.

Selma marked a pivotal turning point in the Civil Rights movement. Today, leaders from all political stripes gather together by the Edmund Pettus Bridge to remember the bravery of those who marched for freedom and celebrate how far we have come.

Livestream of the event is here:

It’s incredibly difficult to comprehend that we beat and gassed American citizens for wanting the right to vote a mere fifty years ago, but encouraging to see how far we’ve come in such a short amount of time.

and scumbag lewis built a career of getting paid by us from that.

Fine men and even heroes are perverted by the Machine in DC. Or ground to powder fighting it.

Think “John McCain”. We could name many others.

mccain was a POS long before he got to DC.

Well, as platitudes go, that one is certainly nice.

But it isn’t true. Which kind of makes it dangerous.

My right to vote and have it mean a DAMN thing is directly threatened by the people on the other side of the “political boundary”.

Same-same with my right to defend my right to vote, or my own person or that of a family member.

I could go on, but you get the picture. And Americans of all colors didn’t fight for civil rights to have them made a dirty joke by the first AFRICAN-American President.

Why don’t you “down-twinkles” masters come out from behind your rotten log and deal with me head-on?

Today is a GOOD day to not be cowards.

Lewis agreed to pose with Scott? Seriously? Was he drunk?

“Our march is not yet finished”.
—Pres. ScamWOW