Working with enemies and rejecting allies. 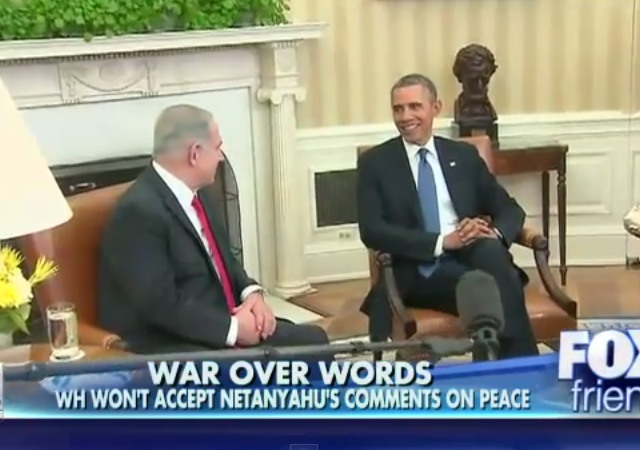 Since Netanyahu’s victory last week, the Obama administration has offered little more than a cold shoulder to Israel, and seems more interested in talking to Iran.

The fact that Israel is our best ally in the region is overlooked while Obama continues working on his so-called “non-binding agreement.”

This morning on FOX and Friends, Tucker Carlson discussed the issue with Ann Coulter:

Obama and others on the left seem to harbor a belief that things would be different if someone other than Netanyahu was the prime minister of Israel.

In his weekly column, Charles Krauthammer reminds us that Netanyahu isn’t the problem:

No Peace Any Time Soon, but Not Because of Bibi

Of all the idiocies uttered in reaction to Benjamin Netanyahu’s stunning election victory, none is more ubiquitous than the idea that peace prospects are now dead because Netanyahu has declared that there will be no Palestinian state while he is Israel’s prime minister.

I have news for the lowing herds: There would be no peace and no Palestinian state if Isaac Herzog were prime minister either. Or Ehud Barak or Ehud Olmert for that matter. The latter two were (non-Likud) prime ministers who offered the Palestinians their own state — with its capital in Jerusalem and every Israeli settlement in the new Palestine uprooted — only to be rudely rejected.

This is not ancient history. This is 2000, 2001, and 2008 — three astonishingly concessionary peace offers within the last 15 years. Every one rejected.

The fundamental reality remains: This generation of Palestinian leadership — from Yasser Arafat to Mahmoud Abbas — has never and will never sign its name to a final peace settlement dividing the land with a Jewish state. And without that, no Israeli government of any kind will agree to a Palestinian state.

No wonder one of Obama’s first orders of business was to send the bust of Churchill back to Britain.

Churchill worked with Stalin out of necessity to fight the greater enemy of Nazi Germany.

But Obama won’t work with our ally, Israel, to keep our enemy Iran from going nuclear.

The price we’re paying for this man’s ego.

How True, LukeHand..!! But, don’t forget, he thoughtfully followed up with another Massive Tell’. He sent the Brit PM a treasure DVD of his campaign speeches. And…Lest we forget, in the ancient mists of ’09, The Boy King immediately took down the large collection of American Historical Oil Paintings & Portraits in the West Wing(Place by President Bush) and replaced them with dozens of photos of…HIMSELF. The first half-month in office foretold it ALL.

Obama is unhinged. No other word for his irrational behavior.

Sadly and maddeningly, LEEJAN, in Alinskyite-Left World, The Infantile Majesty is acting with much Rationality.

Are we not Blessed??

Diplomacy is a two-way street.

I think we should take a cultural cue from the Iranians and begin each negotiating session with them by having our negotiating team greet them with, “Death to Iran.”

Then we’ll be speaking their language. Let them try to get some concessions with that as the starting point.

I was reading the other day that George Schultz would begin each session with the Soviets by reciting an account of one of their human rights violations.

I don’t imagine they thought he was their bitch.

… having our negotiating team greet them with, “Death to Iran.”

LOL! Negotiating’s a bitch, eh?! Poor Lurch. He was doing his best to keep that chief rag head calm. Hahahahaha!

Same story exists with Jimmy Carter, who is still alive. But what does it matter, anymore? (At least hillary gave me my favorite line.)

Bibi’s fine. Last November Bibi was aware of the way obama was going to treat Israel. So, he stepped forward into the line of fire. (the obama maniacs didn’t expect to see elections. Then, when they did they poured money into Israeli politics. And, Bibi won a landslide!)

Great cartoon out there (up at Lucianne’s.) “Bibi-gun.” The barrel is blown off … and obama’s face is blackened by the smoke of backfire.

Has obama destroyed the democratic party, yet? I expect the internal fighting is going to be macabre. Like Drudge’s headline today of “the godfather” (Rahm Emanuel) getting shafted in Chicago by the left!

It is long past time to impeach this traitorous fake.

It’s evidenced in their charter and on the maps in their schools.

Obama is with the enemies of the United States and the West as is the entire leftist establishment that supports him.

“Obama is with the enemies of the United States and the West as is the entire leftist establishment that supports him.”

Yes, someone else that gets it.

” things would be different if someone other than Netanyahu was the prime minister of Israel. ”

There is no one at the moment who could give the Israeli citizen confidence in their leadership to provide the country with security and at the same time be a poodle to Obama, because what Obama wants is an insecure Israel.
The Israelis saw the mess Peres made in the 90s, and Ehud Barak and then Olmert this century, dealing with Hezbollah and Hamas.

To his credit Ehud Barak is a brave man! There was an “operation in Beirut” where he went in dressed as a woman. Long brunette wig. And, high heels. I don’t remember who was shot dead. But Barak never lost his cool. Saw papers lying about, and stuff them down his bra when he made his exit. (A Mossad operation at its finest.)

That he failed as a Prime Minister? “Back in those days” Israelis played with the US. Worried about how to move, because “a call from DC” was more terrifying than terrorists. It’s calmed down since then. And, nothing got given away at Camp David, when Bill Clinton was desperate to remove his Monica stain. (For her? It was on her blue dress. For him? It was on his legacy.)

Olmert? Did you know Arik Sharon put him in “seat #2” to block Shimon Peres from occupying that share? Sharon didn’t expect to stroke. While in Israel, where Peres is still going at 92, he’s been moved into the president’s office. Purely ceremonial. (At a cost to Katsav.)

If American politics teaches any lesson at all (and I think our Founding Fathers were brilliant), we can survive very lackluster presidents. And, who knows? obama’s not Samson. But maybe he’s pulled down the democratic party to a point where they no longer get the majority of voters?

It’s like a deck of cards. When you’re hoping for a high card to turn more often than not you get a deuce.