“This law will cost my company more money than we make.” 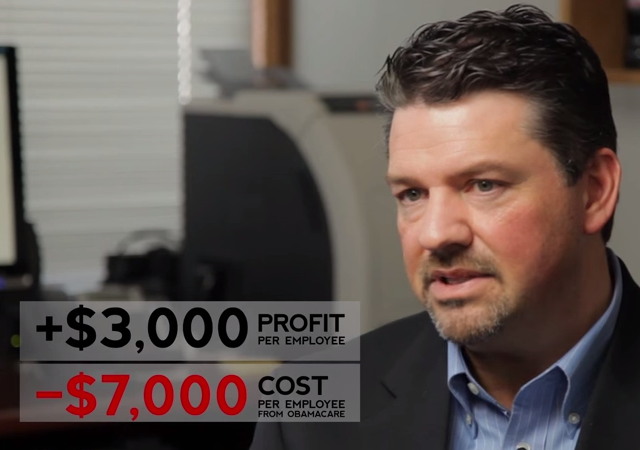 Indiana business owner Scott Womack knows firsthand how Obamacare affects the economy and jobs. He just sold 16 of his IHOP restaurants because of the rules imposed by the law.

We recently reported that some restaurants in Seattle are having trouble with a new minimum wage policy.

Progressives seem to believe that any issue they care about can be solved through legislation and there’s no greater example of that than the Affordable Care Act.

This Longtime IHOP Owner Sold His 16 Restaurants Because of Obamacare

It was a brisk March morning, nearly a year after President Obama signed the Affordable Care Act, and I had trekked to the Midwest with a camera crew to meet Scott Womack, owner of about a dozen IHOP restaurants in Indiana and Ohio.

Womack’s testimony before Congress earlier in 2011 caught my attention and I wanted to visit him at one of his restaurants to see firsthand how Washington’s policymaking had impacted his work.

The IHOP in Terre Haute is located on South 3rd Street, just a few minutes from the Interstate 70 interchange and a short drive from the Holiday Inn where we had stayed the night before. As we sat in the back of the bustling restaurant waiting for Womack to arrive, we ordered french toast, omelettes and other IHOP specialities.

At the time, Womack employed about 1,000 people at his 12 restaurants. When the Affordable Care Act became law on March 23, 2010, he had big plans for his franchise. He had purchased a development agreement in 2006 that would expand the company to 14 new IHOP locations in Ohio…

Here’s Womack predicting the effect Obamacare would have on his business in 2011:

Can someone please remind me which business Obama ran before becoming president?

The Maths of Business…they be hard, huh?

That means he gets a 5% ROI off of every employee. After paying the employee, paying for the building, the expense of the kitchen, food, land, etc, he gets 5% a year return on investment in that employee. Not a month, a year.

Those who complain about pay and benefits needing to go up because of corporate greed need to understand that companies make little money off of their employees. In fact, using his model, that employee may make ten times what the company’s profit is from hiring them and putting them to work.

The math is indeed hard for the company!

And if we wipe out the small ROI through taxes, regulations, and Obamacare, then he really is forced out of business.

While it may not have come across in my snark, I agree completely!

I deal with that math myself constantly! I’ve intentionally structured my firm’s ACA compliance to protect my employees from the odious individual ‘penalty’. It makes me sick to my stomach to even have to consider it.

The rest of the math is even more evil.

In order to avoid the ACA costs, he will cut hours. Employees will stop earning a living wage as a result.

Also, figure that at least 10 employees of each restaurant have to be employeed full time.

According to the video, that capital loss creates the inability to build 12 restaurants.

The total impact is seven times the loss of investment using a money multiplier method.

That is Reagan math versus Obama math!

People can not afford to eat out any more as they have in the past – thanks to Obamanationcare.

Yeah, well, math is racist. Because microaggression and safe spaces! Rape culture! No war for oil! Settled science! Race together! War on womyn! End the H8! The Crusades!

Many of us said while this ObamaDoggle was being illegally “passed” that it was a job killing machine.

Of course, we were absolutely correct.

About that and so many other bad things.

Shit, the most odious parts of the bill haven’t even kicked in yet. I read today that the Dims in Congress are begging Barry to delay the bad parts some more.

Question for your fucking morons who insist this is a “good thing”… if it’s so fucking great why does your Dear Leader keep kicking the can down the road? Fucking morons.

I read in the NEJM that men who swear a lot in public are actually overcompensating for the fact that they have really small……
……vocabularies.

An old joke about Michael Dukakis (when I was working in Boston politics) was that he would examine a plan someone had brought him based on proven resultsm and respond “Sure, but does it work in theory?”

The problem with Obamacare and the sloppy, self-righteous, power-mad control freaks that hatched it is that they didn’t even test it in theory.

Progs believe that anything that works on theory would work in practice if only everyone were as progressively enlightened and virtuous as they imagine themselves to be.

There’s the rub. Socialists want themselves to have a magic wand that forces other people to do the “right” thing. They swear that they don’t want kings, and yet they do want bureaucrats with the power of kings, and less character.

….and as long as they don’t have to live by the same rules…..

This is what happens when people who have never worked at a real job a day in their lives make the laws.

Strange choice, featuring restaurants that are still open when trying to prove Obamacare is making them shut down.
Looks like Romulus Restaurant Group (great name, btw, wonder if they serve wolf-milk) isn’t really being that hard hit by the ACA…

I would assume that what they are saying is that small to medium businesses are being squeezed out of the market. To succeed inspite of the ACA costs, you either have to be small enough that the ACA does not apply to you or else massive so that you have enough economies of scale to be able to afford the extra regulations.

In this case although the restaurants are staying open (for the time being anyway), the business itself is closing, having to sell off its assets to a larger business which can somehow afford the ACA costs out of the small ROI they get per employee.

You obviously have no clue how business works. For example, I own 10 stores, my competitor owns 40 stores. He has four times the resources to pay for centralized activities, such as purchasing, AP, AR, district management, etc.

Ever wonder why Southwest ONLY flies 737’s? It’s called Economies of Scale. Look into it. Small Business is killed under This legislation.

“You obviously have no clue how business works.”

Or anything else, really. He is an idiot who insists on putting his idiocy on display.

“It’s called Economies of Scale. Look into it. Small Business is killed under This legislation.”

Have to admit, that stood out to me too. “The company [Romulus Restaurant Group], which operates 74 restaurants in nine states, didn’t get back to me but Womack believes everyone who worked at his restaurants remains employed.”

I’m absolutely no fan of Obamacare, and think it’s certainly had a negative impact on many businesses and individuals. But this particular case, if the restaurants are still in operation and no-one’s lost their jobs, really does nothing to support that paradigm.

Wrong, Amy. Examples cited above. Is the new ownership group going to keep on board the accountants, HR, and compliance people? The higher paying jobs. Answer: No. Current employees of Romulus will absorb those duties.

I didn’t see the replies above mine before I typed that. You’re right, it’s a good point made that Obamacare makes it harder for small & medium businesses to get along. All regulatory burdens seem to hurt smaller businesses more than the mega-corps — you see this with doctors as well now, with EMR & “meaningful use” and other Obamacare requirements, it’s harder for independent docs to stay in practice without getting swallowed up by Big Corpmed.

Nothing personal, Amy. Just not a fan of anoNY. His/her stupidity never ceases to amaze me.

Right back at ya, quick…

Also note those are higher paying skilled jobs. The minimum wage employees will still be there, who will cost less with mandated expenses, Social Security, and other benefits, 40 matches, administration of flexible spending plans, etc etc.

The new business is probably hiring illegal aliens, to whom the ObamaCare employee mandate does NOT apply.

You know, DACA people, and other illegal aliens.

As Ted Cruz and others have pointed out, that’s a $3,000 advantage to hiring illegal aliens.

Someone downvoted me on this?

It is a statement of fact.

How can you downvote a statement of fact?????

See Recovering Lutheran’s response above, Karen. That’s why! 😉 (btw, I uptwinkled you)

Thanks — I so forgot!

Liberals “feel” Karen, they don’t do facts.
Facts prove them wrong so facts are “bad”. I’ll give you an “Up Twinkle”.

Seriously, are conservatives now arguing against their own donor corporations?

SCOTUS: Closing businesses because of the oppressive costs of Obamacare-is that your best understanding and use of the Commerce Clause?

“I can’t be responsible for every undercapitalized small business in America.”

I think you mean: “Progressives seem to believe that any issue they care about can be solved by forcing some people — whether they can afford it or not — to pay for what they think other people ought to have.”

Wrong. His greed “forced” him to sell.

He is entitled to a return on his investment. Have I lost you yet? Not everyone takes vows of chastity, poverty and obedience. If he doesn’t make a profit, but makes a loss, then the business operates as long as he wished to do charity work. “Greed” is overused. We need businessmen willing to risk their lives and capital. His judgement is that continuing as usual would result in losing money.

If he wanted to run a soup kitchen and feed people for free, using donations, he could do that.