“Saudi Arabia and other countries simply don’t trust the United States any more.” 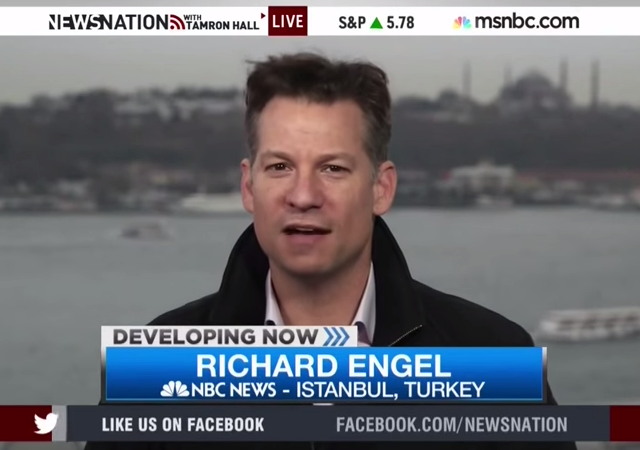 As if things in the Middle East couldn’t get any worse, we’re now at a point where our allies don’t trust us. It’s becoming quite clear that the only person who thinks Obama’s pursuit of a deal with Iran is a good idea, is Obama.

NBC’s Richard Engel reported Friday that U.S. officials were stunned they were not given any notice before Saudi Arabia launched attacks against Houthi rebels. According to Engel, military leaders were finding out about the developments on the Yemen border in real time.

Engel said officials from both the military and members of Congress believe they were not given advanced warning because the Arab nations do not trust the Obama administration after they befriended Iran.

“Saudi Arabia and other countries simply don’t trust the United States any more, don’t trust this administration, think the administration is working to befriend Iran to try to make a deal in Switzerland, and therefore didn’t feel the intelligence frankly would be secure. And I think that’s a situation that is quite troubling for U.S. foreign policy,” Engel said.

Engel’s report strongly suggests that it’s not just incompetence that has the Saudis and other US allies rattled, but a suspicion that they’re being purposefully sold out by Obama to get a deal with Iran that will unleash their ambitions to dominate the region.

The High Price of U.S. Cooperation With Iran

Rarely does an entire region experience the kind of turbulent change that has roiled the Middle East over the past five years. And, on balance, the meltdown has played into Iran’s hands as U.S. influence wanes…

Ironically, the behavior that had made Iran an outlier–its furtive effort to attain nuclear weapons’ capacity–has turned out to offer Tehran a way in from the cold. Negotiations over Iran’s nuclear program have created an unprecedented level of U.S.-Iranian cooperation; already, the talks have led to the easing of some sanctions and the validation of Iran’s right to enrich uranium. The outcome may leave much of Tehran’s nuclear infrastructure intact, even if its weapons aspirations are delayed…

Meanwhile, the nuclear issue has driven a wedge between Washington and some of its closest allies in the Middle East, an area where the U.S. already has too few partners. Most serious is the deterioration with Israel, principally on the nuclear issue, but the Saudis and Emiratis too wonder how much Washington can be trusted in light of its new relationship with Tehran.

Once rid of the emotional stereotype that tells someone that the president loves his country, it is easy to see that what drives obama is anything that accelerates the destruction of America. Former allies and enemies have picked up on this.
Harming former allies helps destroy America, so sentient people understand that is what obama will do. They are acting rationally, in their own country’s interests.

Well, don’t YOU usually try to please your paymasters? Or your Bosses?

That’s all that’s happening here. You don’t really think he spends his time on golf courses do you? He’s getting his instruction from his handler. I always thought the ValJar was his handler but I think she’s just a watch dog and to provide a control.

The US elected paid Foreign Agent as President.

Don’t put his actions down to stupidity or naivity. It’s plain and simple malevolence. And who really really hates us the most in the world?

The appropriate work is ‘traitor.’

It’s a well-worn adage: If someone is talking to me about you, I am certain they are talking to you about me.

Naturally Obama and his minions didn’t have a problem with Ayatollah Khameini leading his countrymen (are women allowed at his speeches?) in a chant of “Death to America.” It’s what Obama is serving up in all sorts of ways.

Perhaps it is Iranian backed Houthis that obama is REALLY supporting in Yemen. He did order the Marines to abandon their weapons (unprecedented) while fleeing the Yemen. He did leave lots of other military armaments behind for the Houthis to gather. It sure is not unusual over the last 6 years for obama to say one thing while his actions reveal something completely contrary. Still no signs of any support for President El-Sisi on just about anything, or even the Saudi’s when it comes to the upcoming nuclear arms race or perhaps the outright war they now face with Iran.

Just what IS obama doing to support the current Saudi and Egyptian actions into Yemen ?

Evacuating quickly and abandoning weapons would be for the purpose of avoiding casualties or prisoners, which seems to be Obama’s highest military priority.

By the way, obambi’s “highest military priority” is to make sure Iran gets the bomb.

First-hand account, by an Iranian journalist, no less, of the desperate White House negotiating on behalf of Iran –

” . . .In his television interview, Mr Mottaghi also gave succour to western critics of the proposed nuclear deal, which has seen the White House pursue a more conciliatory line with Tehran than some of America’s European allies in the negotiating team, comprising the five permanent members of the UN security council and Germany.

“The US negotiating team are mainly there to speak on Iran’s behalf with other members of the 5+1 countries and convince them of a deal,” he said. . .”

People learn. They have interests, and our Obami have pissed on them at every possible turn.

It’s the effect of a world-view lead by a narcissist.

In a world led by grown-ups, eventually they cease to trust you when you constantly display magic thinking.

I wonder if there are any doctor’s notes in the oval office trash can.

This is America. The names of the President’s advisors are of public record.

Time to give our black messiah a 2nd Nobel … hope and change redux.

Wow, what a totally novel idea.

When you engage in the unbelievably petty actions Obama has against Israel, nobody else believes a word you say anymore.

Netanyahu has exposed Obama for the incompetent, visionless moron that he while simultaneously showing the world what a REAL leader looks like.

Now Obama is just proving over and over again how petty and shortsighted he is. He exposes Israeli secrets we have kept for literally DECADES because somebody had the audacity to make a speech to Congress without his personal invitation?

Other countries will no longer trust ANY American President because of the petty actions of this thin-skinned moron. He has just proven to the world that promises and agreements decades old can be broken at the drop of a hat just because he feels snubbed.

It is truly pathetic.

I wonder if the lack of trust, if present, has anything to do with Russian disinformation.

It wouldn’t be fear that the U.S. was a leaking information to Iran that would cause them to keep it secret – it would be fear – or actual knowledge – that the United States would not support it and would try to pressure them not to do it. The United States wasn’t told about the Egyptian air raids in Libya, which I think it may have succeeded in stopping (or maybe they are going on, but out of the news?)

“I wonder if the lack of trust, if present, has anything to do with Russian disinformation.”

I was wondering just how big a dope you are and there you come along and supply the answer. You are as big a dope as Obama is untrustworthy. And that is real damn big.

Dopey, because no one would buy into your dis-information campaign.

They are acting outside of the United Nations, and independent from the United States.

Dopey, acting outside the UN is what every nation in the world does – when shit matters.