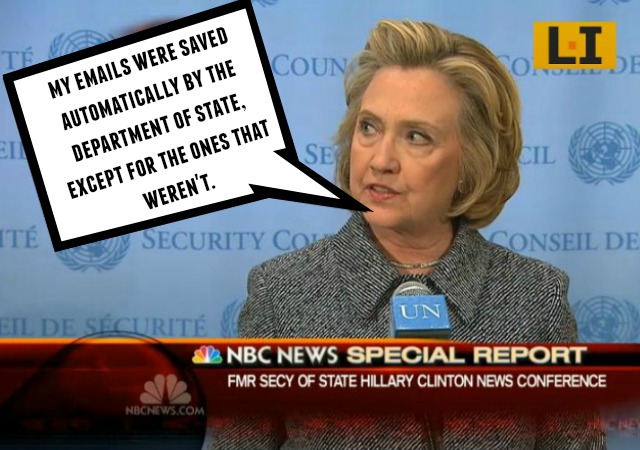 Yesterday, Hillary Clinton stepped out from behind the stone wall to address the press. Her performance fell flat as she grew visibly uncomfortable fielding questions about her private email account.

Within minutes, the internet proved several of Mrs. Clinton’s statements false or at least questionable, and parsed her double talk into laymen’s terms to her detriment.

Today, the Office of the Inspector General released a report. Focusing on the State Messaging and Archive Retrieval Toolset (SMART) and record email, the report could be problematic for one of Hillary’s most important claims — that all emails sent to State Department employees were captured.

“It was my practice to communicate with State Department and other government officials on their .gov accounts, so those emails would be automatically saved in the State Department system to meet record keeping requirements and that is indeed what happened,” said former Secretary Clinton yesterday.

But there’s just one problem — only a fraction of the emails sent within the State Department are actually kept.

The OIG report found that, “in 2011, employees created 61,156 record emails out of more than a billion emails sent.” To make matters worse, even though their systems were upgraded in 2009 (the year Mrs. Clinton took watch over the State Department) in order to, “facilitate the preservation of emails as official records.” Even with the improved infrastructure, “Department of State employees have not received adequate training or guidance on their responsibilities for using those systems to preserve “record emails.””

Outlined in the findings are precise guidelines for when emails should be kept as a record. “If an employee puts down on paper or in electronic form information about “the organization, functions, policies, decisions, procedures, operations, or other activities of the Government,” the information may be appropriate for preservation and therefore a record according to law, whether or not the author recognizes this fact,” says the OIG report.

For the duration of Mrs. Clinton’s tenure as Secretary of State, the State Department consistently failed to meet reporting requirements.

In light of the OIG’s report, it’s more important now than ever, that the contents of Mrs. Clinton’s private servers be examined.

Does America really want 8 years of scandal after scandal?

You mean after the last six?

I’m telling you, Americans are TIRED of the Collective.

On a side note. What does it say about Hillary that Lois Lerner was better at following the rules than Hillary?

This is nothing new or unusual for Hillary.

Just found this. OH NO!

Hillary: “I did not have email relations with that server!”

Seems Eric Holder has been up the same crick as Hillary!

Some great comments on that article also.

[inhale/exhale] Is this like the longest departure in the history of resignations, or what?

Did you really expect anyone associated with obama to do as they said they were doing…..

Is this like the longest departure in the history of resignations, or what?

No, that could be Chief Justice of the United States Supreme Court Earl Warren in 1968, who did the same thing: Resign effective upon the appointment of his successor.

The result was that when the Abe Fortas nomination made by Lyndon Johnson collapsed, he remained on the court till June, 1969 when Warren Earl Burger, nominated by Richard Nixon, became his successor.

Actually that’s probably not the record at all, but it beats Eric Holder.

Yeah, they had to stop him though. He almost ate Hillary. It seems he likes pork chops, pork rinds, and pork butts.

Whereas Bill was safe from attack because all Bill likes to do is pork.

“Serve up the server”.

That should be the chant that goes up at every public appearance of this crone.

Let me see if I understand this right.

Hillary has been lying about all of this – all the time –
except…..

Except when she was fibbing about it?

When I was president of my local public library, I had to admonished my fellow board members about discussing official business via e-mail because of state “open meeting” and “sunshine laws”.

One would think that above the local public library level, things would be done a tad bit more professionally.

Shrillary is above your criminal offense.

For just a few more dollars, you get the entire copy, PLUS the Categorized and Indexed

Possibly Hillary’s e-mails are well read all over the world.
As Secretary of State…imagine the damage that could possibly have been done.
Stuff like this could get people killed, and start wars.
Did it?

Megyn Kelly broke that Hillary had to sign a document on leaving SOS, that she had left all official documents with the archivist. Also that all private emails have to be reviewed by an archivist, as to whether they are really private. This is signed with note that false statement may be punishable with fines or prison.

So every worker has to sign this when they leave … did she sign it? If not, why not? In any case, the rules are clearly laid out. Waiting two years and returning some is not acceptable.

From what I’ve just read, USIA was disbanded in 1999, so I find that particular document curious. Is the SOS (or another Cabinet member) even considered an “employee” of the department which s/he heads? Just wondering…

Politifact claims that the private email use alone didn’t sink the U.S. ambassador to Kenya, Scott Gration in 2012.

While using a private email account was a factor, it seems that the main reason Gration was forced out was because President Obama had appointed a complete incompetent to be U.S. ambassador to Kenya.

“The ambassador is completely incompetent and should be removed as quickly as possible before he does any more damage to American interests.”

While the exact reasons were not obvious at first blush, Ambassador Gration and Secretary Clinton had much in common.

Wow in comparison to Obamas other picks- that’s like getting kicked out of the Hell’s Angels for halitosis.

Hillary will blame everyone on a systems admin. Everyone knows that.

The fact that the State Dept. and the term “shoddy practices” are in the same sentence is due primarily to our Dear Leader.