Get the server. There’s gold in them thar platters. 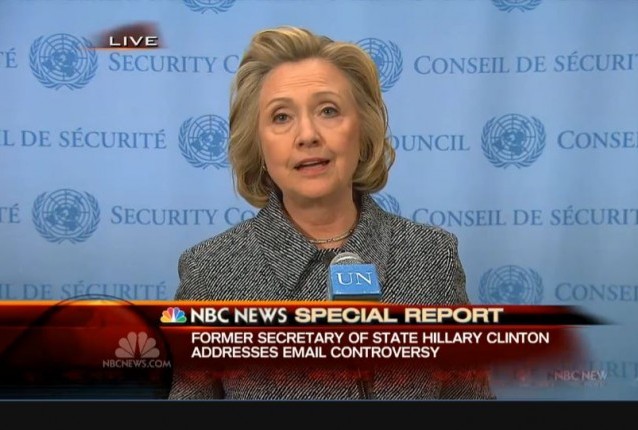 The problem with Hillary Clinton’s explanation for her use of a personal email server and account for government business goes beyond the demonstrable falsehoods and suspicious nature of setting up such an arrangement.

Hillary explained that she turned over all work-related emails to the State Department, and “chose not to keep” (i.e., deleted) the personal emails on the server.

Thus, according to Hillary, the server now only has work related emails.

But Hillary says that she will not turn over the server to a neutral person for review, because the server has her personal emails on it.

But she already said the personal emails are not on it anymore.

Perhaps Hillary is worried that deleted personal emails could be recovered. That’s unlikely — Hillary’s technical advisers almost certainly used a safe delete (write-over) mechanism.  In any event, that can be controlled for by having a neutral person, perhaps a retired judge, supervise the review process. But Hillary would not agree to that when asked at the press conference.

Get the server.  There’s gold in them thar platters.

She can’t keep the lies straight.

Yes, look at the bags under her eyes. Why it’s downright misogynistic of white males like William Jacobson to be brow-beating this haggard old granny over her e-mails! She can’t be expected to understand all this new-fangled technology. And don’t try to trip her up with your sneaky lawyer tricks, where you point out how her prior statements contradict her later ones. Some other wag already did that earlier today, when they pointed out that Hillary claimed she needed to delete some of her SOS-era e-mails so that she could protect all the personal e-mails she exchanged with hubby Bill during that time, and Bill’s office said Bill doesn’t use e-mails, and has only ever sent two during his entire lifetime (and those two were sent during his presidency, and not when Hillary was SOS).

You’re just being mean to a confused old lady! It’s just another round in the evil Rethuglicans’ war on wymens!

She’s experiencing the shock of the media underbussing her after forty years covering for her. She’s learning she’s past her Sell-By date.

Once again, she probably does not care about getting caught in the lies.
She’s just extending her middle finger at the American public.

It’s here server. And, she can legally shred it into little tiny demagnetized pieces. And, believe me that is exactly what will happen. Kind of like if Nixon had used his own private records in the oval office – there would have been no Whitehouse tapes.

She didn’t say she chose not to keep only personal emails.

She got rid of everything except what she turned over printed out copies of.

Too late. Those servers have already been stomped just like Kathleen Willey’s cat.

…or they’re in the same condition as Vince Foster

its an exchange server.
its not just a matter of deleting and over writing as emails are not stored in a flat file, they are in an exchange database (edb file format) that cannot be manually (as in individual items being deleted) edited.

there is manner to do it but its rather involved and not something most exchange admins are willing to mess with as you can permanently take the whole exchange instance out.

That’s assuming she really did use an exchange server.

If she was running Sendmail or Postfix, then it could be a flat file and much easier to edit so as to hide nefarious emails she doesn’t want to get out.

Wired.com raises a bigger concern that she was using her own self generated certificates which could facilitate a man in the middle attack and open the door for her emails sent and received to be overheard.

the domain owa page shows what she is running, exchange 2010.
I also sent an email designed to bounce to get headers.
shes running exchange 2010 service pack 3 with update rollup 7 (so behind in patching as current rollup is 9) according to the id number in the headers.

So does that mean she didn’t delete her “personal” emails?

The evidence was almost buried in her press conference where she she said something that was probably ture as to the substance and false as to the reason.

Secondly, under the Federal Records Act, records are defined as reported information, regardless of its form or characteristics, and in meeting the record keeping obligations, it was my practice to email government officials on their state or other .gov accounts so that the emails were immediately captured and preserved.

Now, there are different rules governing the White House than there are governing the rest of the executive branch, and in order to address the requirements I was under, I did exactly what I have said. I emailed two people, and I not only knew, I expected that then to be captured in the State Department or any other government agency that I was emailing to at a .gov account.

In other words, her claim is that while the Federal Records Act requires that a copy be preserved of all work e-mail, that copy could be in the other person’s e-mail records!!

Also, she copied over e-mail sent to the White House from [email protected] to a state.gov address as she was supposed to do with ALL work email sent from clintonemail.com after about October, 2009.

But she only did that with email sent to the White House.

She was deceiving them. Whoever was getting that e-mail at the White House.

I’m experiencing a growing feeling that Mrs. Clinton isn’t being honest with us.

It’s been growing since the early ’90s.

It is really hard to irretrievably wipe a server. It can only be done deliberately.

The servers / disks are gone years ago.

She does not think she can be elected, all the “fund raising” is padding the purse. Retire with a couple of billion and a ton of influence – Chelsea is set for life….

The Clintons’ win a strange race…..

Still no questions about why her two closest advisers were also on the server.

As I’m understanding this, Hillary deleted all personal emails leaving the work related emails which she turned over to the State Dept in toto leaving the server with … what?

Except for some cat videos, the server should now be empty.

The corrupt hag looks like she’s about to keel over.

No link to the vine yet?

Now on my FB page…..THANKS!

Yeah.We’re so close to bananna republic status now, we may as well complete the transition by providing the world with an image for the ages. Someone should get a warrant, send a half dozen county sheriff deputies over there with instructions to come back with either the server or Hillary in handcuffs. They could put her in a cell with the other nose thumbing, computer whiz kids, Koskinen and Merkel. (One could only wish.)

At her prime, Hillary was never admirable, or even tolerable to a great many, she has become a high risk, a laughing stock, an international embarrasment, and just a plain old hag.

I know this is a classy site with lots of well educated people reading and posting but sorry, I need to say that she is one ugly hag.

Hillary is caught doing something very wrong to America, setting up her own server to avoid FOIA and internal oversight.

Now poor battered woman Hillary has had to bother to craft her best cover story, thanks to all you nosy, rapey people. The patchwork alibi can’t quite cover every angle, but she has done the best she can and you proles will just have to accept that. There will be no cross examination, you can’t see the scrubbed server.

The Hillary media attack dogs are out in force, doing the “nothing to see here, vast right wing conspiracy, the bad black man is trying to rape me” routine. (Klein was on FOX this morning saying Obama is throwing her under the bus) Of course if that were true, Holder would have had the FBI seize the server long ago, I would think.

It is really hard to watch the Democrat machine candidate start her campaign with a blatantly dishonest coverup of a serious crime. The “what difference, at this point, does previous criminal activity matter?” first woman president.

Are you ready for Hillary?

Greta put on Vinny Troia – a self professed cyber-security expert – who
says he traced Clinton’s IP address to a server located in NYC.

Interesting. Be interesting to have the techies follow this, since the press won’t.

“Perhaps Hillary is worried that deleted personal emails could be recovered.”
Correction. Emails that Hillary SAYS were personal. And let’s not forget that once upon a time personal business was ethically prohibited at work.
“That’s unlikely — Hillary’s technical advisers almost certainly used a safe delete (write-over) mechanism.”
Don’t bet on that. The entire premise of the double secret probation e-mail server was that nobody was going to learn about it.

Palin shows how multi-tasking gets done!

From Morning Jolt: Her acolytes would go onto cable news and insist, as Hilary Rosen did, that the options were to believe everything Hillary said or believe in “conspiracy theories.”

Unfortunately, in the 1990s too many people were reluctant to believe in conspiracy theories, especially big ones.

Bill Clinton always piled up investigations that exonerated him.

In some cases he made it look like a conspiracy would have to be biigger than in fact it was.

And he circulated bad conspiracy theories, like Putin does.