Calls Obama’s claim that hard liners in Iran oppose a deal “a lie.” 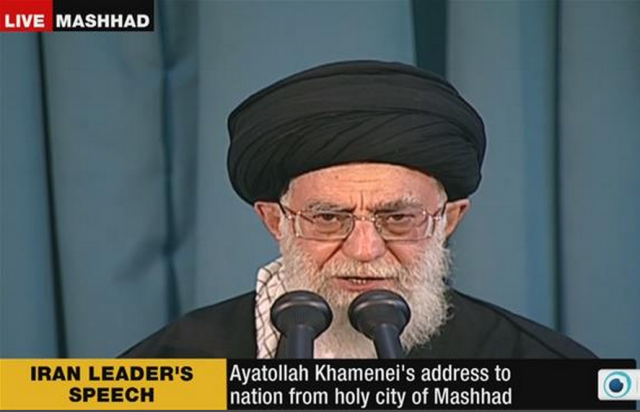 Last night we started a flash poll as to whether to laugh or cry as to Obama’s video message to Iranian youth for the Norouz (Persian New Year) festival, in which Obama practically begged them to help reach a nuke deal.

As if Iranian youth have any say in it. When the youth of Iran rose up against the Mullahs in 2009, Obama was silent for weeks, and then implicitly backed the continuation of the Mullah regime. Keeping the Mullahs in power has been a prime goal of this administration.

News flash: The Mullahs are not interested in Obama’s speeches.

Iranian Press TV reports on a Ayatollah Seyyed Ali Khamenei, the Supreme Leader of the Islamic Revolution, delivered for Norouz. The first point Khamenei made on the nuclear negotiations was a rebuttal to Obama’s video statement in which Obama suggested that hardliners in Iran, the U.S. and elsewhere (i.e., Israel) were against a deal:

Touching on the ongoing nucearl talks between Iran and the P5+1 group of countries, the Leader mentioned a few points on the negotiatons.

Ayatollah Khamenei said the first point is that the United States government is in dire need of nuclear talks….

“Obama’s Norouz message included dishonest assertions and his claim of friendship for Iranian people was not sincere,” the Leader said, noting that Obama’s claim that there are people in Iran who do not want nuclear case to be resolved through diplomacy is a lie.

What the Iranian nation is resisting against is bullying approach of the United States, Ayatollah Khamenei noted.

“They [the Americans] say [to Iranian negotiators] ‘you come here and listen to what we say and implement them word for word’. But our nation will resist against it and will never accept this.”

Next, the Ayatollah rejected any attempt to tie regional issues (i.e., Iran’s expansion through proxies) into the nuclear talks:

The second point, Ayatollah Khamenei said, negotiations with the United States are just about the nuclear case and does not cover regional issues or issues related to Iran’s domestic issues, including defense matters.

“Iran and the US have opposite views on regional issues. We want security and calm in the region, but the Arrogant powers led by the America pursue the policy of sowing insecurity in the region, which is quite the opposite of our goals.”

Last, the Ayatollah laid down a red line on lifting of sanctions:

The third point, as put by the Leader, was removal of anti-Iran sanctions, which should be discussed as a part of nuclear talks, and should not be considered a result of those talks.

Ayatollah Khamenei added, “The America says ‘we sign the agreement and monitor [Iran’s] behavior and then remove the sanctions’. This is erroneous and unacceptable and Iran will never accept this. This is the Americans’ ploy. Removal of sanctions should be part of any agreement.”

(added) The Ayatollah has just taken to Twitter (as this post went live) to drive home the point on sanctions: 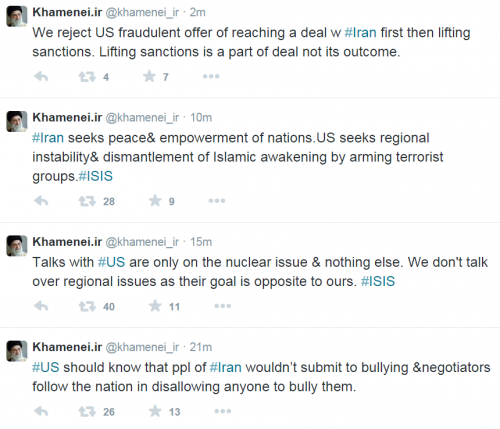 Iran’s Supreme leader Ali Khamenei called for “Death to America” on Saturday, a day after President Barack Obama appealed to Iran to seize a “historic opportunity” for a nuclear deal and a better future, and as US Secretary of State John Kerry claimed substantial progress toward an accord.

Khamenei told a crowd in Tehran that Iran would not capitulate to Western demands. When the crowd started shouting, “Death to America,” the ayatollah responded: “Of course yes, death to America, because America is the original source of this pressure.

I doubt the Iranian people would support the deal. They are much more civilized and peaceful than their leadership. Plus, as mentioned, they will probably shun Obama for failing to help them when they tried to overthrow the mullahs.

Supreme Leader: “Having groveled before me like a whimpering schoolgirl, I hereby unload my handsome and holy bowel on President Hussein Obama.” (Sounds of flatulence & heavy fecal movement.) “May he feast on it abundantly.”

President Barack Obama: “Having publicly ignored the Iranian people in the streets of Teheran demonstrating for Freedom from the Mullahs a few years ago, I hereby lap-up the blessed excrement of the Supreme Leader and give him a wink-wink re-Nukes and massive interference with his neighbors in the Gulf.” (Sounds of slurping, chewing, smelling and sighing in satisfaction.)

Winston Churchill, Ronald Reagan, George W. Bush, Abraham Lincoln (In Chorus-Unison): “If there is anything that History has taught us…IT IS THAT WEAKNESS IS PROVOCATIVE and favored by life’s Scrawny Moral Cowards & Wishful Thinkers. Millions have died throughout History as a consequence.”

Ayatollah Khamenei added “This guy is a bleeding amateur, and proof that democracy does not work.”

If Obama put Boehner in charge of negotiations this problem would be solved in a week – two weeks tops.

Boehner would cave to Iran just as he does to Democrats and everything else. He has no spine, no courage.

In the whole “strong horse/weak horse” thingy, Barracula has the U.S. looking like a My Little Pony, Rainbow Edition.

That’s GOTTA send just the right kind of message to the head-choppers and bomb-builders everywhere.

The only rational negotiations that should take place are for use to tell Iran that were going to destroy all of their production facilities for fissionable materials and Ballistic missiles and take their fissionable materials. They have 5 days to decide how this is going to be done. We can do it peacefully with their help or with hundreds of nuclear weapons.

In the lead up to his 2013 election victory, Hassan Rouhani gave an interview in which he pushed back against the suggestion that as Iran’s nuclear negotiator during the 2003 to 2005, the program was suspended under international pressure.

An angry Rouhani shot back and described how Iran was able to manipulate international negotiations and ultimately advance the program.

“The Tehran Declaration was supposed to outline the resolutions and suspensions,” he said. “We didn’t allow it. We only halted the gas supply for those 10 centrifuges in Natanz.”

That would be Pres. ScamWOW “servicing” Iran.

Yep, Rags…Or, as I sensitively and delicately stated above: “..Yum-Yum…yummy….(slurp)…Mmmmmmmmm…”

I wish it was not so easy to visualize Rouhani offering His Bitch an after-glow ciggie.

“Help me Bibi Wan Kanobi, you’re my only hope.”

While bambi thinks he is helping the Iranians get the bomb and become the center of pisslam, the reality will be the destruction of the middle east.

Do not expect a bunch of mad mullahs to refrain from nuclear exchange.