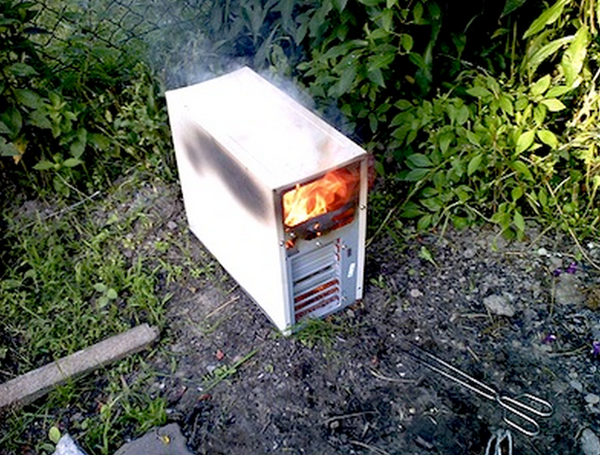 When I first watched Hillary’s press conference, something jumped out at me that has been bothering me since.

It’s not just the self-contradictory explanation of why she will not turn over the server to a neutral party, or the apparent falsehoods in her explanations as to prior usage.

Hillary did something that was a dead giveaway, reflecting a consciousness of guilt.

Hillary volunteered a piece of information about which she had not yet been asked and which was not critical to her explanation of why she would not turn over the server.

Apparently reading from a prepared statement, Hillary volunteered that she deleted “personal” emails:

“At the end I chose not to keep my private, personal emails, emails about planning Chelsea’s Wedding, or my mother’s funeral arrangements, condolence notes to friends, as well as yoga routines, family vacations, the other things you typically find in inboxes…. “

Why volunteer that she deleted personal emails, and drag the red herring across the trail to lead the discussion towards Chelsea, her mother and yoga?

Hillary gave away the game at that point to me.

Hillary showed a consciousness of guilt and deliberate misdirection.

Agreed. I hope the suit just filed by the AP motivates Gowdy to go after her server.

But yet not ONE member of the MSM will pick up on this. A republican one-tenth as extravagantly, endlessly, sloppily corrupt and mendacious as Clinton would not survive a fruit fly’s life in modern politics. And yet this pathological, political mediocrity goes on forever. Why? The media.

There is something deeper here than HILLARY! getting a pass from the press.

We have an aristocracy just as real as in feudal England or Wilhelmine Prussia that is functionally above the law for any crimes they commit. We don’t call it “Divine Right”, but between prosecutorial discretion and deliberate blindness, biased sentencing, and the automatic use of unsupervised probation or country club prisons instead of real prison time there is no deterrent effect on the conduct of our rulers because they are immune from punishment.

Which is actually something our Founders explicitly forbade.

You missed one huge aspect of Clinton’s inconsistent lies.

She claims that she never sent or received classified material at the clintonemail address.

However, since she didn’t have an official email address, this requires you to believe that for her ENTIRE TENURE AS SECSTATE, she did not send or receive ONE SINGLE classified document.

That, to me, is the biggest and most absurd claim I’ve ever heard.

In any event, I’m sure the Clinton team will provide the public with an explanation, as soon as they’ve had time to make one up.

Furthermore, EVERY SINGLE PERSON who sent her an email would have to have observed that her email address was NOT something like: [email protected]. That, in itself, means everyone who dealt with her absolutely knew that she was not using a government server for her email account.

And nobody said a thing.

Hillary mentioning family and yoga emails was meant to create word pictures so as to soften her image and make her appear as a wholesome relational person who would not have the desire or time to play games with controlled information. Not. Not even on International Women’s Day. We won’t be fooled again.

I agree. Hillary’s obvious obfuscation requires immediate computer confiscation. She is not above the law.

Stop. Stop. I can’t imagine Hillary in a Yoga pose. The rhetorical contortions of her justifications are already unbearable.

True, but the picture she actually drew for most was of a calculating corrupt woman, doing a very bad job of calling her deletions innocent by fabricating personal stories, about which the world has no need to know.

We don’t think, oh yes that’s nice and we understand, but rather, “why are you building this fake alibi about deleting files?”

I have to think she knows a forensic audit would find deletions and methodical scrubbing, so she bothers with the alibi. Scrubbing or missing drives would indicate guilty knowledge, to some degree, as I see it.

I wonder if her aides were using the same private email server. Not only does such a setup remove HRC’s State Department from having to comply with FOIA requests and pesky congressional inquiries, but it insulates her from the WH ghosts directing foreign policy to State absent a paper trail with POTUS fingerprints. The WH can make State’s correspondence disappear through a variety of methods (Hello, Lois!) all while leaving HRC holding the bag for Obama’s foreign policy disasters. You can bet HRC’s email server wasn’t 100% secure, but from her point of view it was/ is an insurance policy she couldn’t be without. Helluva way to run a government, eh?

She lies like a five year-old.
Somebody mentioned on tweeter yesterday that she manages to be both dull and villainous at the same time.

Get someone on oath to attest to server backup procedures. There will then be a paper / logging trail of backups and/or backup deletions. NOBODY deletes backups…unless one is concerned about incriminating oneself.

She becoming “iconic”— for all the wrong reasons.

Hillary hooked her star to Bill Clinton early on while in Arkansas and has used him as he has used her, to ride the neap tides into the White House. The business partnership established by a marriage has evolved to reflect the change of contractual obligations required and failure of performance clauses to be renegotiated due to Bill’s philandering and Hillary’s most recent failure to get the bid in 2008, having to settle for a chair at the table. The brilliance of the Bill/Hillary partnership is the drawn in collusion with power brokers in the democratic party whom they rely on for the endorsements and which have allowed to continue the funding arrangements for the Bill and Hillary Foundation bankrolling the entire operation to buy influence and lackeys for the next wave. Look for Obama to hire on the same architects to replicate this business model in 2016 as he retains title to the funds he continues to raise but not release to DNC campaign funding.

Post Script: My point? In a marriage such as theirs, it was established very early on the character trait referred to by Dr. J., “Consciousness of Guilt”, is a non-starter in their world.

Observations from Homer (not Simpson), and Wagglestaff

For just a few more dollars, you get the entire copy, PLUS the Categorized and Indexed

Senator Bob Kerry said president Clinton was a very good liar, it is obvious that Hillary is a very slow learner. After all these years of listening to him she can not tell a convincing lie.

It was a prepared statement. It is eventually going to become known that she doesn’t have or claims not to have and/or won’t turn over, any more e-mails, so she had to give a reason for no longer having them.

It’s an absurd reason, unless she is trying to say they were afraid of a search warrant.

Using the Clinton-model every single employee of the federal government could run their own email server from home for both their home and work email communications. The decision not to is only a personal or political choice.

Former Secretary of State Hillary Clinton, like all departing federal employees, was required to fill out and sign a separation statement affirming that she had turned over all classified and other government documents, including all emails dealing with official business.

Fox News Megyn Kelly reported Wednesday evening on the requirement and that a spokesman for Clinton had not responded to a request for comment, including an explanation of when the former chief U.S. diplomat signed the mandatory separation agreement or, if she didn’t, why didn’t she.

It is claimed that failure to turn everything over makes one liable for incarceration and massive fines.

Professor Jacobson, as far as you know is this true? If so, we are back in the territory I mentioned in my earlier comment.

Pop quiz: who paid for the server? Were congressionally appropriated funds used to establish and maintain the server operations? Who paid for the alleged singular device that she used? Chances are really good the server belongs to the People as part of her execution of duties.

“I did NOT…have classified relations with that email. Ms. Server.”