The sledding insurrection has begun 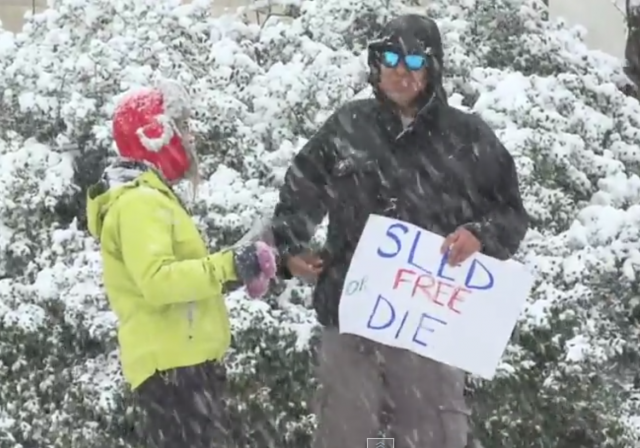 The prohibition on sledding on Capitol Hill is a long-standing regulation, and is not a recent occurrence.

… a regulation written — clearly by 19th-century scrooges — banning play on the Capitol grounds.

“It shall be the duty of the Capitol police on and after April 29, 1876, to prevent any portion of the Capitol Grounds and terraces from being used as playgrounds or otherwise, so far as may be necessary to protect the public property, turf and grass from destruction or injury,” the regulation reads.

Those sledding in civil disobedience were informed by Capitol Police that their down-hill antics were prohibited. Undeterred, they continued to slide down Capitol Hill anyway. Despite the warnings, police watched sledders without bothering to enforce the city’s archaic regulation.

The sledders of DC had a pro-sledding ally in D.C. Del. Eleanor Holmes Norton.

Norton wrote Larkin last month asking the Capitol Police Board to overturn the ban on sledding on the Capitol grounds. The board has until March 26 to formally respond, though it seems Washington’s kids shouldn’t hold their breath.

When it became clear what a novelty it would be to be able to sled on the Capitol grounds this week, Norton sent Larson a letter on Wednesday asking for a waiver from the ban March 5-8.

“This could be the last snowstorm the D.C. area gets this winter, and may be one of the best for sledding in years,” Norton said, getting it.

“Children and their parents should able to enjoy sledding on one of the best hills in the city. This is a one-time waiver that will allow Washington kids to sled while we await a more formal review of the ban, which will likely come after the last snow has fallen in our region,” she said.

In the end, no permission was necessary and the intrepid sledders garnered substantial media coverage.

It is our property, and it won’t kill the grass.

Even if it killed the grass, I’d be in favor of it.

The hill is more useful to the kids, than to our useless legislators. If they like grass so much, they should dip into their own pockets to reseed it.

Children getting a lesson in insurrection; its a good thing.

Is anyone going to point out that this is a slippery slope these kids are on? 😉

Go, kids, GO! 🙂 I can’t think of a better place for patriotic rebels to unite in a show of civil disobedience than on Capitol Hill. 🙂

The kids are adorable. I hope they had a blast!

This is the first time I’m aware of that Eleanor Holmes got it right, so kudos to her for stepping up for the kids.

If they’re not careful, it’s likely to snowball on them…

Scofflaws. Are there no SWAT teams?

First they came for the toboggans…