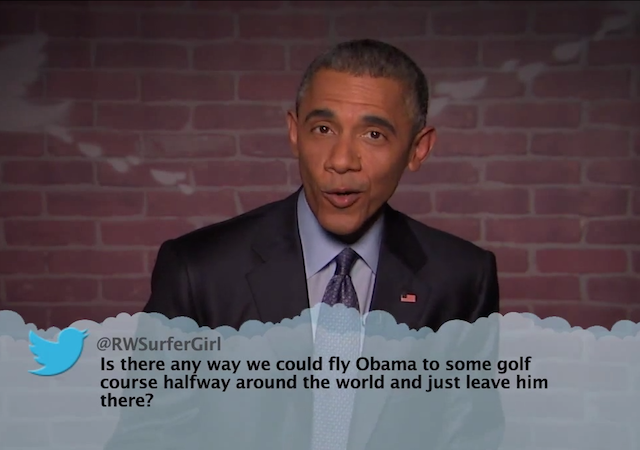 It must be liberating to be a lame duck president—especially when you’ve had as terrible a week as Obama.

Obama took to the media this week to express some faux embarrassment about the now-infamous “Iran Letter,” and play down Republican blowback against the idea that what Tom Cotton and the other 46 senators who signed the letter did was somehow “treasonous” or “unprecedented.”

If I were him, I’d cast about for any distraction I could find; he did, and he found it in Jimmy Kimmel. The President stopped by Jimmy Kimmel Live this week to talk politics, Ferguson, and read a few mean tweets directed at his office.

The scary part about what’s happening now is that this could very well be Obama’s plan to salvage his presidency. First, he sat down for a YouTube “star”-led interview while Yemen was burning to the ground; now he’s reading mean tweets on Jimmy Kimmel like a Hollywood institution and publicly not giving a damn about actual—albeit “mean”—criticism.

Kimmel has been having his guests read mean tweets for years, but it plays out a bit differently when you’re the President. Check out the normal, “celebrity” version of the bit (curse words bleeped out, but maybe NSFW depending on your office):

When celebrities do it, it’s funny. (And maybe a little sad, if you’re Chris Pratt. I love you, Chris Pratt!) Having the President do this is an entirely different story. “Mean tweets” chosen for the celebrity bit are chosen because they’re ridiculous and irrational. The tweets chosen for Obama have an element of truth to them*: he’s a terrible president (and life hacks aren’t going to fix that); he golfs a lot; prices have gone up; and, to be honest it doesn’t seem like he’s worried at all about what’s happening in the world.

“It’s funny because it’s true” is applicable at first blush, but when it comes down to it, it’s really just sad.

Even Gawker took a shot at the President for this, [Emphasis]:

President Obama spoke out against the police shooting last night in Ferguson and read some Meh Tweets about himself in an appearance on Jimmy Kimmel Live Thursday.

“What had been happening in Ferguson was oppressive and objectionable and was worthy of protest,” Obama told Kimmel. “But there was no excuse for criminal acts.”

Everybody hurts—and Obama is taking full advantage of that.

*For the record, the ear one was mean; but I won’t stick up for his mom jeans.

The probability of the survival of the Republic and the Constitution are inversely proportional, ie 1 divided by, to the number of days Barack Obama remains in office to the Nth power. An exquisitely small, small number.

More reasons to totally igore Obama and to ignore the Democrat Party.

“The Liberals’ Oligopoly Model Is Dying”

“Greater diversity undermines oligopoly control, and liberals have based everything on oligopoly.

Now, because Internet bandwidth keeps getting cheaper, the oligopoly model is collapsing. Only in politics and education is the linear model still dominant. But it is clear that it is going to die in education. The Khan Academy is the wave of the future. So is the Ron Paul Curriculum. The bankruptcy of two private colleges last week is the canary in the coal mine of higher education. Sweet Briar and Tennessee Temple are closing their doors. This is the wave of the future…..

Once he won re-election, he pretty much gave up any pretense of leading or governing in favor of straight-up trolling America.

His second term will go down in the history books as “I DID IT FOR THE LULZ”.

He did it for the lutes?

It matters to him very much.

He’ll take infamy, if he can’t get blind, stupid, idol worship of himself.

He is constantly flaunting his unAmerican ways… laughing as he does. He enjoys hurting Americans.

I would think, based upon his jokes at events like the press dinner, that he enjoys hurting America, and the barbs don’t matter to him. But after Ben Carson, M.D., rattled his cage at the Prayer Breakfast in ’13, I have to agree: it bothers him.

Not sure what the difference is between the tweets, and Carson’s comments. Haven’t figured that out yet.

As much as I despise Barry Soetoro, I didn’t think he could sink so low as to have Carson audited. But of course, even I underestimated how low Soetoro would go. I should have known a wannabe tyrant would go the bottom of the barrel, and then pull out a saw to cut out the bottom.

Someone SHOULD be putting together a course on “How To Be President Of The United States”.

This should go into the course as how NOT to behave as a President SHOULD.

That is its only possible significance.

The man panders to voters who get their news from john stewart. What did you expect?

Just where does Stewart get all those clips of Fox News talking out of both sides of its mouth? Does he make them up? Nah, he just has to go and collect them.

By all means, attack the messenger. That way you can keep your ideology pure.

Australian blogger Tim Blair at the Sydney Daily Telegraph has some great photos of your hero Jon Stewart up on his blog.

Go ahead. Pin them on your wall. We know you want to.

But John Stewart is no comedian.

Jon Stewart is the correct spelling.

A skunk by any other name would stink as much ~

Next time around, can we please elect someone who isn’t an immature, petulant, whiny little b*tch?

It’d be nice to have some adults in charge for a change. Not holding my breath with all the mouth-breathers our educational system is churning out these days ~

I also didn’t know Sean Penn was still famous. I thought he just rowed boats on the NOLA River now.