3 YouTube stars interviewed Obama, because at this point, why not?

3 YouTube stars interviewed Obama, because at this point, why not? 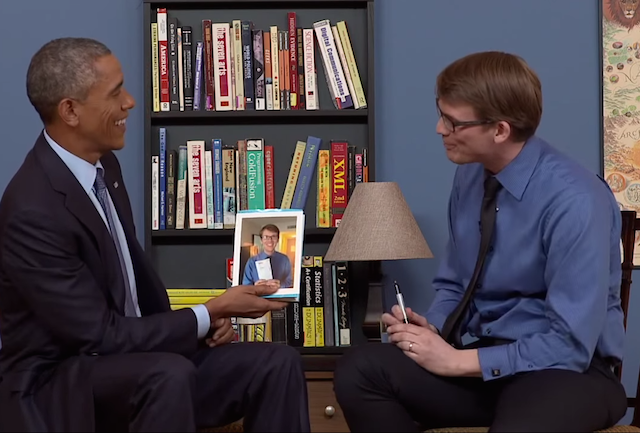 I didn’t expect to enjoy President Obama’s sit-down interview with YouTube stars Bethany Mota, GloZell Green and Hank Green, first because before today I couldn’t name a “YouTube star” to save my life, and second, because of a variety of rapid-fire thoughts involving things like gravitas and Presidential and I’d like to see more of Jake Tapper on my screen, TBH.

Of course, I saw this news at the same time I was seeing reports of Yemen burning to the ground, so maybe I was a little irritated that this was taking up space on my wire. I didn’t care. I was worried about real issues.

As it turns out, so were Hank, GloZell, and Bethany.

Was it “journalism?” We can fight about that all day, but I don’t think it matters, because it worked. Hank Green peppered the President with questions, but he pulled it off well and I didn’t feel like his Obamacare PSA ruined it (even though I groaned and yelled OH OF COURSE YOU DID HANK because, predictable.) GloZell Green calls Castro a dick at 22:07, which is inappropriate in almost any scenario, but she moved on and asked Obama a question about Cuba. (Then she accidentally called the First Lady the President’s “first wife,” which was hilarious and human.) Bethany Mota made 19 look smart, which is hard to do with the Justin Biebers of the world running around making 19 look mind-numbingly stupid. (She also asked about Boko Haram, which is more than I can say about most MSM outlets.)

Were they nervous? Yes, they were. Did their questions occasionally meander? Yes, they did. Do they lean farther left than I ever could? Yes, I think they do. But as I watched them work through their interviews, I couldn’t help but think back to the last time an interview by Katie Couric or Brian Williams made me care about what the President had to say.

I couldn’t think of one example. I can’t say that I cared deeply about the President’s answers in these interviews, either, but that’s mostly because I knew exactly what his answers were going to be when asked questions about the issues that tend to get younger people moving—gay marriage, cost of education, race relations, etc.

Was it a stunt? Of course it was a stunt. They arranged this as an effort to reach out and touch people who engage with mediums that aren’t called NBCCBSABCFOXMSNBCCNN. But it was a brilliant stunt because it put the more-hostile-than-they-were-six-years-ago MSM in its place while turning the dial up on the White House’s cool factor and creating the illusion of accessibility.

I may not have agreed with the progressive tone of the questions and answers, but what I will say is that, at least in my opinion, Hank, GloZell, and Bethany did a better job making the President look like a human being who cares about his country than the Katies and the Brians of the world could ever hope to do.

That should light a fire under the butts of the consultants and activists who think developing modern outreach strategies for conservatives is a waste of time, eh?

Why? Because O wants to drive home the point that his sycophants in the MSM don’t act any differently that these three sycophants on Youtube.

Well…considering the source…..” a legacy child ” who is a perpetual………

Was it a stunt? Of course it was a stunt.

And what else would the President of the United States do with his time?

This makes playing golf seem like an absolutely fruitful use of his time.

Barry, Obama, Barrack, or whatever his name is this week is always desperate for attention – bad or good.

I guess next he’ll be proclaiming to the world the type of underwear he and is boyfriends wear. I’m so deeply nauseated by this alleged president. He is definitely my bête noire. Forever.

Could I please order a Calvin Coolidge?

You know… A grown up? Without deep, dark personality disorders?

I’m with Twitchy on this one: Bethany Mota asked deeper questions than 99% of toadies in our MSM.
http://twitchy.com/2015/01/23/butthurt-pres-obama-finally-gets-asked-a-tough-question-on-boko-haram-from-youtuber-bethany-mota/

“That should light a fire under the butts of the consultants and activists who think developing modern outreach strategies for conservatives is a waste of time, eh?”

I think it’s incumbent on a professional writer to name names when making such a charge, so you’re off the hook for now, but I don’t happen to know of any such national level consultants or activists “who think developing modern outreach strategies for conservatives is a waste of time” and I’m pretty sure you don’t either. I would welcome being proved wrong, however.

Secondly, if this YouTube video of Obama answering pre-screened safe questions from supporters, one of whom believes putting honey in your eyes will change their color, is an example of what you consider a “modern outreach strategy”, I think you maybe somehow missed how much this makes Obama look like an idiot. As it would any conservative candidate who did the same in conservative flavors. I would dump any conservative candidate who did anything similarly inane.

That YouTube, Twitter, etc., are good vectors for political campaigning is a ‘well, duh’ assertion. But the conservative entry cannot be as stupid as this video by Obama.

Yeeeeup. To all the above.

RE:”…how much this makes Obama look like an idiot.”

When he’s the genuine article, he doesn’t have to look like it….. LOL

Would I have done it the way they White House did this? No. But ignoring just how effective the appearance of accessibility can be—especially to an audience that religiously follows “YouTube stars”—is a fatal mistake. They’re the future, and the Democrats are seizing on that opportunity because at this point they have nothing to lose. Recognizing that does not equate to endorsing the execution.

“I think it’s incumbent on a professional writer to name names when making such a charge, so you’re off the hook for now, but I don’t happen to know of any such national level consultants or activists “who think developing modern outreach strategies for conservatives is a waste of time” and I’m pretty sure you don’t either. I would welcome being proved wrong, however.”

“Sure, I’ll give you a full list of operatives and consultants who dropped the ball,” said no one ever. Not going to happen, Henry, but I can still answer your question. I started writing about the GOP’s need to engage the culture in 2009 (google my name + Redstate), and we’re only now getting to the point where candidates concede the need to get to know people and their passions, as opposed to just memorizing statistics about what younger voters, etc. supposedly want. 2014 was a groundbreaking year for GOP candidates, but we still have a lot of work to do, and that includes proving to the base that getting in touch with the culture doesn’t necessarily mean that we have to make concessions on a policy level.

I was already aware there were no conservative consultants and activists who “who think developing modern outreach strategies for conservatives is a waste of time”, which is why you can’t name even one. It damages articles to employ straw men, as well as credibility. Your articles are frequently full of such stuff.

He said homosexuality was a life-style choice.

They give him a pass because he snapped his fingers and gave us gay marriage. Oh, wait….

Glozell? Really? Her cinnamon challenge was hilarious, but to interview and be taken seriously? How far we’ve fallen. Stick to the cinnamon Glozell.
https://www.youtube.com/watch?v=Cyk7utV_D2I

Didn’t expect anyone in the WH after President Lewinsky, would so boldly degrade the office again.

The news media is one giant Obama diaper. (For Michelle Obama, the diaper is somewhat larger, by physical necessity.)

The incompetent bozos hogging the leadership positions of the GOP have not a clue how to capture the American imagination. (The way to do it, of course, is by showing guts and nerve. But the GOP leadership is the wrong place to look for guts and nerve. Squeaker Boehner may have scored points by inviting Netanyahu, but he is otherwise a massive failure, as is GOP Chairman Pee Wee Prebus. Then there’s McConnell. And Mittens Romney. And Jughead Bush, etc. etc. etc.)

The point is, guys like Ted Cruz and Scott Walker (and Trey Gowdy) can capture the American imagination, get elected, and go on to work toward reversing the nightmare of the past 6 years and the horror of the 2 years yet to come. The current hacks running the GOP cannot and never will, despite embracing any people with green lips.