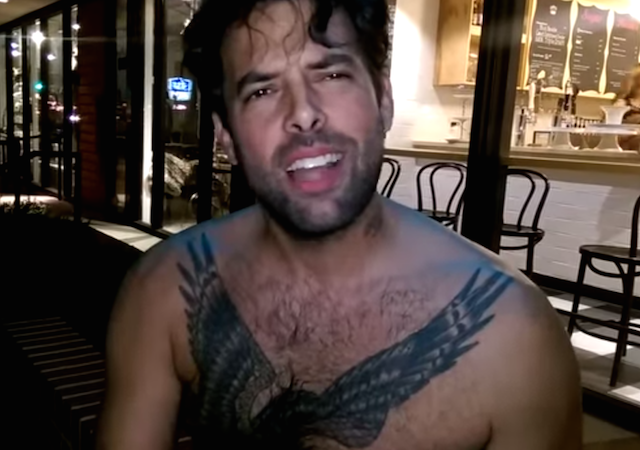 Remember Austin’s “White People Only” sticker controversy? Last week, shop owners came in to find that their businesses had been branded with stickers bearing the Austin city seal and proclaiming that the premises were “exclusively for white people.”

When the racially-charged stickers started popping up unsolicited on businesses all over the east side of town, police and city officials were hard-pressed to figure out which make and model of social justice warrior was responsible.

Until now, at least. Ladies and gentlemen, we have a winner.

Austin lawyer and self-proclaimed “DWI badass” Adam Reposa has claimed responsibility for the stickers. He says he was trying to “raise awareness” about the issue of gentrification in Austin’s traditionally minority-dominated communities.

KXAN has the story:

“They’re getting pushed out, and pretty quick. This area of town is turning into white’s only,” Reposa said in the clip. “Not by law like it used to be, and everyone’s going to jump on, ‘that’s racist!’ ‘that’s racist!’ Man, this town, the way **** works is racist! And I knew I could just bait all of y’all into being as stupid as you are.”

Reposa went on to blast people for not getting the message.

The sticker showed up on storefronts of El Chilito, Sugar Mama’s Bakery, Ingredients Grocery Store and Windmill Bicycles — all on Manor Road.

Austin Mayor Steve Adler condemned the stickers in a statement earlier this week and the city said they would take appropriate action if any other instances occurred. Austin police say they are aware of the video and are looking into the matter, and it was unclear if any charges of any kind for vandalism can or will be filed.

Reposa gained notoriety for his eye-catching commercials in 2012, promising to be tough for his clients. He has also been jailed for contempt of court for using a lewd gesture to express his irritation with a prosecutor in court.

Speaking of “lewd,” here’s his confession (Seriously NSFW for language, and a ridiculous chest tattoo):

Unfortunately for Reposa, not even the residents of East Austin appreciated the gesture.

This guy is on the fast-track to being disbarred.

An action of this type by a lawyer brings the “Profession” into disrepute within the Texas Bar Disciplinary Rules.

Check out his web-site. A-flucking-mazing. The guy has a video where he essentially brags about ignoring his client’s instructions and being found in contempt.

I also wonder how many times his grill has been rebuilt, because there are a LOT of people in Austin who would knock his teeth out on general principles.

That idiot brings his profession into disrepute every time he opens his mouth or gets his picture taken.

Someone thought a Progressive wasn’t responsible?

Vandalism. He should be required to remove the stickers – with his forehead

Like there are no monied people in Austin who are NOT “white”?

Sorry about the down thumb. I was trying for the reply button. I was thinking, his poor clients……..if they exist.

He apparently thinks that minorities should have their own sections of town, into which white people shouldn’t tread, or at least shouldn’t take up residence. Aren’t those called “barrios” and “ghettos”?

In Texas, we have defamation AND business disparagement torts.

We even have intentional infliction of emotional distress, although we REALLY don’t like it much.

For him, a jury would make an exception. And his video would be WONDERFUL evidence.

He strikes me as a Mojo Nixon wannabe. Listen up, kids….alcohol and drugs can have a negative impact on your critical thinking skills, and cigarettes may shorten your life!

That’s exactly what I was thinking! Sounds like he’s the son of or the biggest fan of Mojo Nixon, who, if you weren’t paying attention to overrated street singers in the eighties, briefly made a splash profanely whining with a guitar about how much he hated MTV, the Eagles, Michael J. Fox, and banks.

He was exposed to the “White privilege” Ebola virus. Quick, quarantine him!

With that attitude, narcissism, and compensatory tattoo, this dickhead is a psych researcher’s dream.

When I first glanced at the pic, I thought he was wearing over-hauls.

Like your neighbors for church up to the hollar…

I used to wear them more days than not. Highly utilitarian.

I knew it. The action was not authorized by Holder’s Office of Diversity. Nor was an illusion of gentrification subsidized through transfer payments. Although, the degenerative condition may have been planned (e.g. eminent domain) to create a lucrative real estate market. Not unlike healthcare insurance, education loans, “green” energy, etc. that drive progressive costs, thereby depriving or indenturing people to politicians and their private counterparts.

Question: if a business could demonstrate that the presence of the stickers on their front window glass caused them some tangible harm (loss of business, loss of reputation, etc), said business could then sue the perpetrator, correct?

Just asking, I’m not a lawyer.

Instead of lasting people for not getting his message he would do better to be investigating remedial courses in communication skills.

More leftist-generated “racism” in the name of “awareness raising”.

I’m really starting to worry about all these racist liberals in our society.

Yeah, that tattoo was a good idea.

He wears it about as well as Michelle Obama wears a bikini.

So another fake hate crime. There’s a surprise.

Shouldn’t this idiot face charges of graffiti? One for every sticker he put on other peoples property.