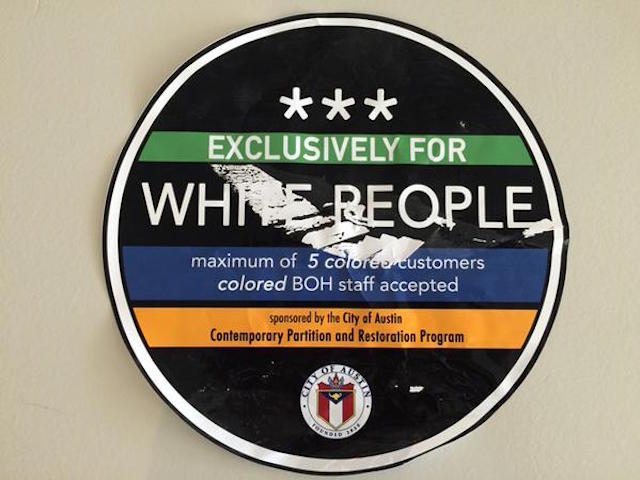 Officials in Austin, Texas are running defense over several acts of vandalism against businesses in the “gentrified” areas of the growing city.

Yesterday morning, shop owners came in to find that their businesses had been branded with stickers bearing the Austin city seal proclaiming that the premises were “exclusively for white people.”

From the Austin Chronicle:

Among the businesses tagged with the stamps – presumably some kind of ironic protest against gentrification – were the Rare Trends clothing store, El Chilito Tacos y Café, Windmill Bicycles, and Sugar Mama’s Bakeshop.

In addition to the declaration, “exclusively for WHITE PEOPLE,” the signs supposedly limit “a maximum of 5 colored customers” and allow only “colored BOH [back of house] staff accepted.”

Caroline Gray, Director of Sales and Marketing for Rare Trends, said she hadn’t seen the sticker when she came in this morning, and was only made aware of it when the phone began ringing with complaints. A post had gone viral on Facebook, and at least some people believed the sticker literally, and that it had been posted by the business itself. “When we found out,” Gray said, “we took it down and are keeping it for the police. We understand they are investigating, but we have no idea who did it.”

The community was shocked. Business owners were mortified. Nobody really seemed to know who had put the stickers up; not one to miss out on an opportunity, however, local Democrat and state representative Dawnna Dukes immediately took to Facebook to condemn…the shop owners? 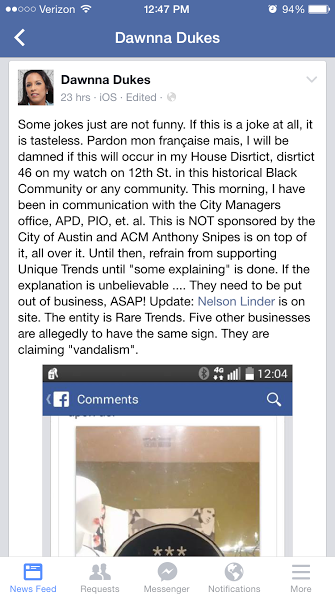 Nelson Linder is the president of Austin NAACP. Speaking to the Dallas Morning News, he immediately took to task the vandals, he said, “Don’t put signs like that on people’s doors because you want to bring attention to your plight.”

Dukes finally caught on to the fact that this wasn’t a secret capitalist plot to frighten away minorities, but likely a race-based attack by “anti-gentrification” activists, and updated her Facebook status accordingly (kind of): 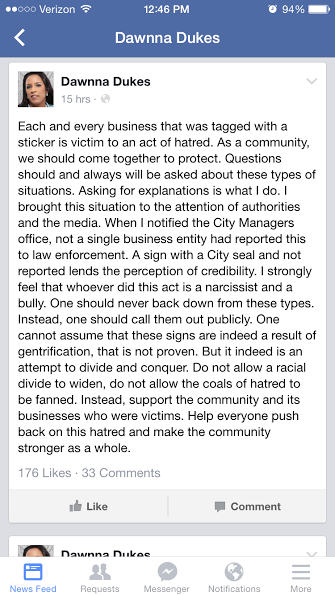 I used to live in Austin, in an area that was deemed “gentrified.” I never once—not once—felt unwelcome there, not even when I went into the “ungentrified” areas of the neighborhood. The activists who put these stickers up not only beclowned themselves—they painted the people and business owners who actually live in east Austin with a racist brush, and people aren’t happy about it:

Several business owners and employees said they were unnerved when they noticed the stickers on their buildings.

April Jensen, who works at the Sugar Mama’s Bakeshop on Manor Road, said “it kind of hurt” when she read the sticker.

“I don’t really understand the message behind it,” said Jensen, who is African-American. “All types of customers come in here.”

The shop’s owners posted a statement on Instagram that said they consider themselves and their staff to be victims of a hate crime.

Sarah Goeth, a co-owner of Windmill Bicycles, which also had a sticker placed on its building, wondered if the person responsible did any research about the businesses.

“Some of the businesses targeted are not even owned by Caucasian people,” she said.

Right now, we still don’t know who did this, but the fact that the stickers were professionally printed may make it easier for city officials to track down the vandals.

The story has since gone national, and that’s a good thing. I hope it explodes once Austin officials discover who did this—it will give us an opportunity to shine light on the type of race-based aggression that draws divides in communities, and makes it impossible to live in a society without constantly being forced to “have a conversation” about race.

I notice no heartfelt apology (let alone any) from this crank for libeling the businessowners and disparaging them to their customers falsely.

She acted in concert if she does not apologize.

Don’t hold your breath waiting for an apology. She’s a Democrat, don’t you know?

Gentrification or voluntary development intrudes on the multi-trillion dollar welfare state and civil rights rackets. It exposes the consequences of policies that are far removed from economic development.

“Gentrification” rebuilds and reinvigorates older, decaying areas, raising property values and community tax bases. The complaint against it is apparently that the people who lived there and let it decay are no longer able to afford to live in the newer, better neighborhoods they played no role in revitalizing, and receive no special handout in compensation.

In other words, saving and rebuilding neighborhoods is only a good thing if you pay some grease to the Diversity Consultants.

This bakery is a mile from the UT campus. The pressure for more housing and rental prices (very high in Austin) are driving gentrification which is really a market for apartments and town homes. The current residents, especially renters, don’t like that they are being priced out.

It’s “excepted” not “accepted.” Sheeesh, don’t even race-baiters learn this stuff in school any more?

Political activism in Austin TX. My God. Stop the presses.

Seems like Dawna Dukes was the perpetrator of a hate crime herself.

Nice to see she didn’t waste any time checking things before opening her mouth.

She jumped right in and spread her privilege all over innocent people. Wonder if she had inside info.

Sounds typical. I am a refugee from the Peoples Democratic Republic of Austin (managed to climb the wall and skedaddle in 1988). I also was a graduate student at University of Texas before making my way to Texas A&M because the latter offered me an assistantship.

I remember Austin as a drug and crime-infested hellhole with a distinct Stalinist flavor to its politics. Judging by Dawnna Dukes’ sophomoric antics (I wonder if she is any relation to David Duke, her ideological race-baiting soulmate?) the city seems to have lost none of its unsavory reputation. Political leaders who were certifiably insane is as permanent a feature of Austin as is the Colorado River. Think North Korea with a more pocket change and cars and less freedom, and that is Austin.