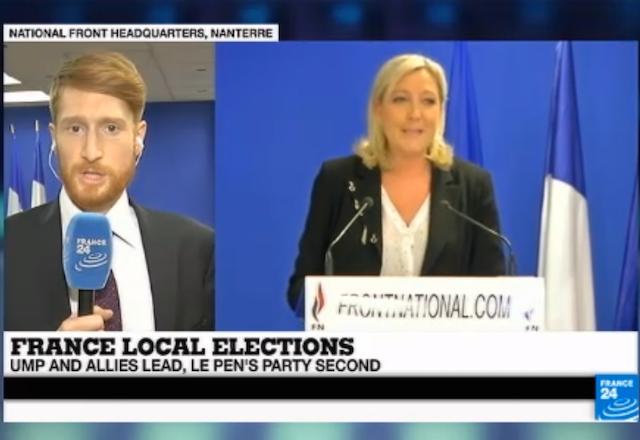 The controversial National Front party lost ground to former president Nicolas Sarkozy’s center-right UMP party and their allies in the first round of the French elections on Sunday.

UMP took 32% of the vote, with Marine Le Pen’s National Front (FN) trailing at 26%. Current president Francis Hollande’s Socialists came in third with 21% of the vote.

All is not said and done for the resurgent Sarkozy, who still has to face a second round of elections on March 29, but it does signal to Hollande’s majority that the French people could be ready for change.

Don’t look for a winning alliance between UMP and the FN, though. From Reuters:

Sarkozy immediately ruled out any alliances between his party and FN candidates in next Sunday’s second round, which will decide who controls France’s “departements”, one level in France’s complex multi-layered system of local government.

“To those who voted National Front, we understand your frustrations,” UMP chairman Sarkozy told supporters at party headquarters.

“But this party will not solve France’s problems – it will only make them worse,” added the ex-president, who came out of retirement last year and hopes to secure the 2017 presidential ticket for his bitterly divided party in primaries next year.

Le Pen’s tone following the results was celebratory, but supporters had high expectations coming into the first round of reporting and many are questioning whether or not the FN can earn more than a single departement on March 29. Polls indicated that the FN would come in closer to 30%, as opposed to the just shy of 26% Le Pen’s party secured. The FN earned ten points over their take in the 2011 local elections, but French pollster Bernard Sananes says that the party has “reached a ceiling.”

The National front is controversial, but still not nearly as unpopular as the Socialist party, as shown by the first round of polling data. Known for being anti-immigrant and anti-European Union, the FN has supported the return of the franc, and Le Pen herself lauded the rise of far left radicals in Greece.

However, according to polling data, turnout rang in this year at 51% as opposed to 45% in 2011. Right now it’s unclear whether or not that’s due to the polarizing nature of the FN and their anti-Islam campaigns, or Sarkozy’s return from retirement, or something else; the only thing that’s certain is that the French are out in force, and this year’s election could be a gamechanger.

Both Le Pen and Sarkozy are expected to run for president in 2017. Pop some popcorn—we’re in for a showdown!

For a guy who got the fecal matter kicked right out of him by a friggin’ commie, Sarkzey sure runs his mouth. I’d say 26% is breathing down the neck of 32%.

A few more Charlie Hebdos before election day and his cockiness might dissolve into slinking-away tears.

They’re less likely to be “anti-immigrant”, than anti-DRRAT policy (Displace,Replace,[over-]Regulate,Abort,Tax) favored by the left-wing to marginalize and neutralize the native population. The problems with legal immigration happen when the rate exceeds assimilation and integration. The problems with illegal immigration happen when a legal jurisdiction creates double-standards (e.g. selective exclusion a la “equality”) or violates its sovereignty (and the civil rights of its citizens) by enabling democratic disenfranchisement through an uninvited alien population.

How does a man understand cheese…? Who can say…?

If only DeGaulle were alive to witness the DeDevastation he helped lay the groundwork for.

So the news is that Le Pen lost the first round? A decade ago they were an extreme minority party. I suppose that what happens when major parties ignore most pressing issues.